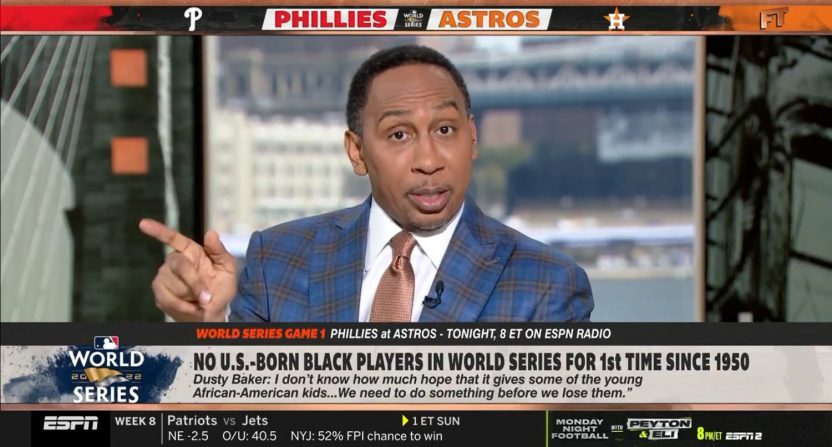 Stephen A. Smith sat on the set of ESPN’s First Take Friday morning and boldly declared he is “underpaid” by his employer.

Smith’s assessment of his own salary was part of a much larger discussion dissecting why Major League Baseball struggles to attract Black athletes to the sport. According to Smith, much of the Black population does not trust the country in terms of meritocracy, nor do they trust baseball’s system of needing to get through the minors and six years of service time before receiving the opportunity to earn market value. During this conversation, Smith cited his own salary.

There will undoubtedly be some people who read or listen to Smith’s comments and criticize him for claiming his $8 million per year salary isn’t enough while the general public battles inflation and a struggling economy. But in terms of the sports media industry, and considering what Smith means to ESPN, he is underpaid.

Stephen A. Smith is the face of ESPN, he is the host and architect of their premier studio show, First Take. Smith’s content feeds ESPN’s social media platforms, he’s a lead ambassador for the company, he’s featured on NBA Countdown and recently launched a new show, Stephen A’s World. Considering the hours Smith puts in at the network and the amount of content he creates, his $8 million per year salary is underpaid especially when compared to other sports media personalities.

Tony Romo’s salary is more than double that of Smith’s. Tom Brady is set to quadruple Smith’s personal ESPN salary when his Fox contract kicks in. And Smith recently watched his employer sign Joe Buck for nearly $15 million annually and Troy Aikman for $18 million per year to anchor their Monday Night Football coverage. Smith certainly puts in more working hours throughout the year than those aforementioned sportscasters, the difference, however, is that Smith’s content is not backed by NFL sized ratings.

In recent months, Smith has attempted to boost his personal value by repeating a desire to branch into forms of content that transcends sports, having already went outside ESPN to launch a political podcast. Last year, Smith similarly stated he was underpaid during an appearance on The 10 Questions With Kyle Brandt Podcast.

“Despite the huge contract that everybody wants to lean on, I am still underpaid,” Smith admitted to Brandt. “I am paid well, but I know I am worth more. During a negotiation, you get what you can get, and you move on.”

Those declarations came before Smith took control of First Take, before he was added to NBA Countdown, before Stephen A’s World, and before ESPN spent $165 million to land Buck and Aikman.

Smith signed his current contract with ESPN in 2019, a five-year deal that’s set to run through 2025. But it sounds like he’s already setting the table for his next negotiation.