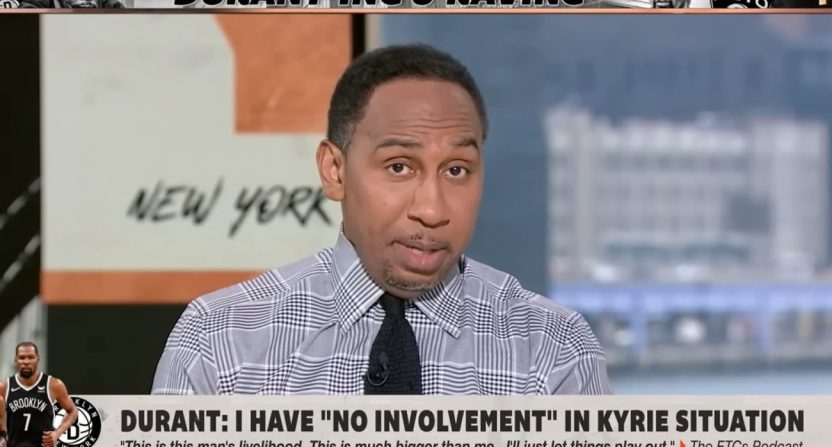 In the latest edition of new media vs old media, Stephen A. Smith decided Kevin Durant doesn’t fit into either category.

As the Brooklyn Nets’ Big 3 experiment nears total implosion, Smith blasted Durant for not addressing it on his podcast, specifically the status of Kyrie Irving, who was recently granted permission to seek sign-and-trade packages.

“KD just proved, new media what? You better find another candidate, cause he ain’t it. You’re talking about a dude that sat on a podcast and said ABSOLUTELY NOTHING!” Smith ranted on ESPN’s First Take.

“If you’re gonna have a podcast, don’t you have to say something?” Smith asked. “He said absolutely nothing. NOTHING. NOTHING. You gotta speak, my brotha. Uhhh, excuse me, how’d you feel when Golden State won the chip? Did you regret making that move? How do you feel about Kyrie Irving?”

Durant did comment on Irving’s status with the Nets during his latest episode of the ETCs podcast, but he didn’t take a side or offer any raw emotion about his polarizing Brooklyn teammate.

“It’s no involvement at all. I can’t be involved with it,” Durant said of Irving on his podcast. “This is this man’s livelihood. This is much bigger than me. Being a free agent, it’s one of the most important times in your career. That can’t be swayed by anybody else. I just do me and wait for the time.”

Durant hasn’t preached a desire to overturn the sports media industry the way Draymond Green has, but he did torch Smith and Skip Bayless, claiming they’ve changed sports for the worse. Smith doesn’t appear worried, taking Durant’s commentary on his active teammate as proof that the NBA superstar has no chance of making it in the media.

“You see what I’m talking about, new media? See Draymond, you can say that my brotha, cause you’ll answer those questions. You’ll ask them and answer them,” Smith said before going so far as to promote Green’s podcast. “KD ain’t do that. New media, you sure? You see, when you talk about the media, you got to answer questions! When you’re talking about new media, you’ve got to address topics that the public wants to know!”

One strange plot twist in the current “new media” vs old media war is Smith’s recent allegiance to Draymond Green. Green makes more noise than Durant, but does he project to be that much more of a media anarchist than Brooklyn’s superstar forward? Has Green shown a willingness to ask the tough questions and call out his NBA peers the same way he puts Skip Bayless or Nick Wright on blast? Smith seems to think so, but I must have missed that commentary.