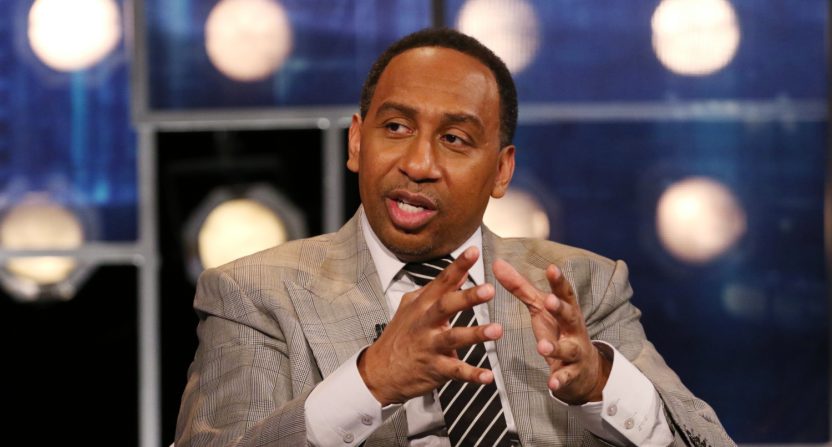 Stephen A. Smith joined New York radio personality and voice of the Yankees on YES Michael Kay in Manhattan on Tuesday morning for a taping of the network’s CenterStage interview series. The show will air on Thursday, July 25 at 11:00 p.m. after the network’s Yankees-Red Sox telecast.

Awful Announcing was on hand to attend the taping and share some interesting excerpts from the pair’s hour-long conversation.

Smith began by saying he was the hardest working man in sports journalism and ended by assuring the live studio audience that nobody could measure the level of his hunger and that his goal in sports broadcasting was still high.

“It’s to be one of the greatest ever to do this job,” he said. “I’m about dominance. I’m about annihilation.”

Smith shared an anecdote he’s mentioned before, most notably for a 2018 issue of The New Yorker about advice Donald Trump gave him when he was a guest on his old ESPN talk show Quite Frankly, which ran from 2005-2007.

“It’s Donald Trump, say what you want about him but I do think it’s a mistake for anybody to think he’s an idiot,” Smith said. “The man is quite slick and smart. So respect is due in that regard.”

After their interview, and Trump said something to Smith off the air that he still carries with him to today.

Smith said he was gone and let go from ESPN for two years between 2009 and 2011 because of a contract dispute, and he felt that it was the greatest thing to ever happen to his career, “and arguably one of the worst things that ever happened to corporate America,” because he locked in on recognizing his value.

“When I left and I was gone, I said ‘okay, what happened?’ I was being emotional,” Smith said. “I wasn’t focused on the business of television and broadcasting and understanding what my ratings are, what my Q Score was, what kind of numbers I brought in. I was just thinking, ‘I’m a bad man.’ I gotta get paid what I think I deserve. I didn’t look at their bottom line, what their criteria was, what they measured as success, and then say what am I delivering.”

Now when Smith is in negotiations, he strictly talks about the bottom line.

“I talk numbers. I talk business. I don’t have any emotion whatsoever about it,” he said. “It’s like excuse me, this is what you said defines success. Here’s what I bring. Where’s my money?”

Smith also discussed his authenticity with Kay, and his honest, sometimes brutally so, straightforward approach.

“I say what I mean and I mean what I say,” Smith said. “And if I feel that way, then that’s what I’m gonna do. And I think people see me, and there’s a level of authenticity that they recognize and see in me. They know I’m not playing. I mean exactly what the hell I say. And I’m not gonna sugarcoat it to the degree that it compromises truth. I might couch it a little bit softer, depending on the situation, but if there is a truth that I believe is there to be told, I am going to tell it. And the consequences be damned.”

Smith discussed his first on-air experiences with Skip Bayless and how he said that if he had to choose one person to be in a foxhole with, it would be his former First Take debate partner.

“I mean no disrespect to anybody, but that’s my brother,” Smith said. “Skip Bayless and I are tight and we’re tight in a very different and unorthodox way. You’ll never see us hanging together. We might go out to dinner. His definition of a vice is Diet Mountain Dew. That’s Skip Bayless, he’s a devout Christian. I try to be. So we’re very different, but I’ll tell you for the purposes of a debate show, that’s my man.”

The first time the duo ever worked together was on Jim Rome’s old Fox Sports show The Last Word and what they said were naturally polar opposites from one another.

“There was no prep, no anything,” Smith said. “We just viewed things differently. But we both immediately respected each other, because I knew he meant what he said. And he knew I meant what I said.”

But the time Smith remembered where things really clicked was when Mark Shapiro, then ESPN’s president and now one of his reps at Endeavor, had them do a debate on Sunday morning SportsCenter called “old school, new school” with Bob Ley as the moderator.

“Skip one time sat there and said professional athletes should have an 11:00 curfew all year round,” Smith said. “And I started cracking up laughing. I said ‘how old are you, Skip?’ We’re both in separate cubicles in New York after the show, and I come out and say ‘that was great TV, man. That was funny.’ And he looked at me and said, ‘I’m serious.'”

That ultimately led to their First Take run that spawned so many sports debate shows that still lord over daytime sports television.

“When we had morning meetings, we never had to have a discussion about what one or the other believed,” Smith said. “We were polar opposites, but it worked because there was a genuine love and brotherhood that we had with one another.”

When Bayless left ESPN, Smith had to transition to his new debate and sparring partner, Max Kellerman, which he discussed with Kay.

“It was a challenge. It still is a challenge. And I say that with all due respect to Max, who I genuinely like,” Smith said. “Max is one of the best people you’ll ever meet. He’s an incredibly nice guy, very, very intelligent. He has a cerebral approach to things. And here is the only difference between somebody like him and somebody like and various others. Max is the kind of person that genuinely believes this is how he feels. ‘And if you don’t understand, I have to convince you because you just don’t get it, you’re not understanding. Because you couldn’t possibly disagree with me.’ That’s Max. Skip and I don’t give a damn whether you agree with me or not.”