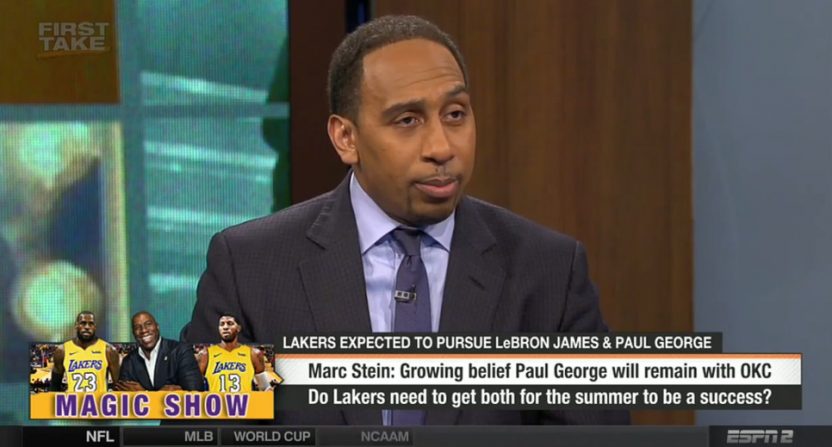 One of the more publicized ESPN personnel moves in recent years saw NBA insider Marc Stein let go (along with several other NBA figures like Chad Ford and Henry Abbott) in last April’s cuts, with Adrian Wojnarowski and several others joining the network from Yahoo a couple of months later. And that led to a whole lot of talk that Wojnarowski may have pushed for the network to clear out the likes of Stein, even if no hard evidence of that has emerged (and it may just be that the network didn’t want to duplicate roles).

At any rate, Stein landed at The New York Times in September, and he’s been doing some reporting there that occasionally makes ESPN headlines, such as his note in Tuesday’s NYT NBA newsletter that “There is a growing belief around the league that Oklahoma City has a far better chance to retain the free agent-to-be Paul George than many believed when the Thunder crashed out of the first round of the playoffs.” And while discussing that report on First Take Wednesday, Stephen A. Smith said “I would love to see my man Marc Stein back,” and also brought up Wojnarowski:

Smith says “The only thing I’d like to add as an aside, I am incredibly happy to have Adrian Wojnarowski with us, incredible insider, does a phenomenal job, but there’s room for one more. I would love to see my man Marc Stein back. I like seeing him at The New York Times, he did a great, great job for us, and I wish he was still here. I just wanted to say that.” Max Kellerman then says with a laugh “Anyone who’s got Woj is winning,” and Smith says “That’s right.”

This can be seen on a few different levels. On one level, it’s just a nice comment from Smith about Stein, and a far, far better crediting of an ex-ESPN employee than we’ve sometimes seen. (To say nothing of poor attribution to outside reporters in general, which thankfully has improved in recent years, but once was a giant ESPN issue.) On another level, it’s a very prominent ESPN employee (and maybe even the face of the network these days) essentially criticizing ESPN management’s decision to lay another employee off, and doing so on-air on one of their most prominent programs. Oh, and it should be noted that Stein was a guest on The Jump during the NBA Finals:

Getting back to Wednesday’s First Take clip, Smith’s decision to directly mention Wojnarowski around comments about Stein (and Kellerman’s decision to compare them even more directly in his own response) will only add fuel to the fire of speculation that Woj played a role in Stein’s exit, and that the two couldn’t co-exist at ESPN.

Of course, it’s probably better that Smith did mention Woj, as if he didn’t, that could be seen as a shot at the guy they do have, but explicitly bringing him up does lead to comparisons of the two. And the Kellerman response stands out as particularly weird; Smith’s comments can be seen as just praise for Stein without criticizing Woj, which could be fine, but Kellerman appears to be directly saying that Woj is better and implying that the two couldn’t be at the same outlet. Whether that was his intention or not, it didn’t exactly come out well.

Of course, it’s probable that none of this will actually lead to anything. ESPN seems happy with Woj and their other NBA reporters and analysts, Stein seems to be doing well at the Times, and you can’t easily put that genie back in the bottle; even with ESPN under new management following the John Skipper to Jimmy Pitaro transition, it would be incredibly surprising if they brought back a high-profile cut like Stein.

And Smith and Kellerman don’t seem too likely to get in too much trouble for their comments, either. Smith is mostly just saying nice things about a former colleague, even if he is diving into discussing his bosses’ personnel discussions (he might get an internal memo about that, but public discipline seems unlikely), and Kellerman is just pumping the tires on the NBA coverage ESPN does have. But this was still unusual to see. Stein appreciated it, though:

Just saw him at the Finals and he knows I miss him, too … https://t.co/H9VtPSjTRr