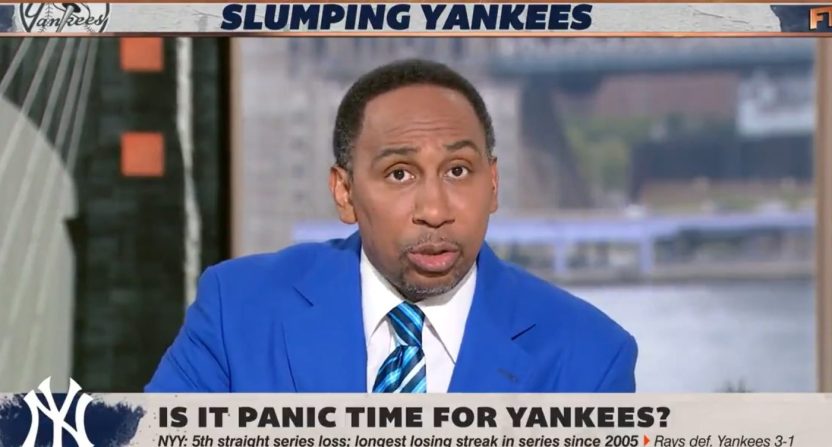 Stephen A. Smith went viral for what appeared to be an epic tirade on the New York Yankees Wednesday morning, but it was the final seconds of his rant that were cringeworthy.

During his rant, Smith touted New York Mets owner Steve Cohen for being the closest thing there is to the late George Steinbrenner. Smith proceeded to reference current Yankees ownership, insisting if the Pinstripes don’t make the World Series but the Mets do, manager Aaron Boone will be fired.

.@stephenasmith didn't hold back on the Yankees ?

"You look like flat out trash. …Y'all straight garbage! There's more expected from the New York Yankees." pic.twitter.com/jFH3SuLeoi

“Even Hank and Hal ain’t tolerating that. Forget about George, God rest his soul. I miss that man,” Smith said before he emphatically doubled down on the take. “NOT EVEN HANK AND HAL ARE TOLERATING THAT.”

Unfortunately, Hank Steinbrenner passed away in 2020 at the age of 63 following a lengthy battle with an unspecified liver illness.

Earlier in the rant, Smith boldly called the first-place Yankees “trash,” before adding a more detailed description. “You’re worse than how it smells from the sewer in the Bronx. You’re straight garbage. There’s more expected from the New York Yankees.”

Initially, some viewers were entertained enough by Smith comparing the Yankees to a Bronx sewer that they missed his mention of Hank Steinbrenner. But the gaffe abruptly swung the pendulum on Smith’s rant from entertaining to awkward. Also strange was ESPN’s decision to share the clip on social media to the tune of more than one million views without cutting Smith’s mention of the Steinbrenners, which occurred in the last 10 seconds of the video.

This is not the first time we’ve seen Smith get something brutally wrong on ESPN, and it certainly won’t be the last. NBA coverage has always been Smith’s specialty, but as he attempts to keep First Take well-rounded by displaying a similar passion for other sports, he occasionally gets exposed.

Like many of his ESPN colleagues, Smith has been duped by Ballsack Sports, but he’s also committed his own errors without the assistance of a “satirical” Twitter account aimed at spreading misinformation. In December 2018, for example, Smith infamously expressed excitement to watch Hunter Henry on Thursday Night Football, failing to recognize the NFL tight end was on the PUP list all year.

Smith did not address the Steinbrenner error during Thursday’s episode of First Take.