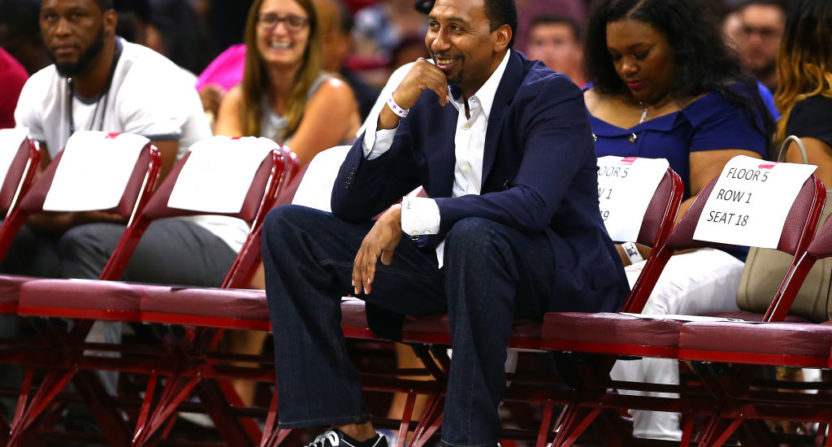 Stephen A. Smith is known for many things, perhaps most for his career as a bombastic, #EmbraceDebate First Take personality. But based on this video from the Syracuse football team, his motivational speaking might be his biggest strength.

Smith was in Syracuse to talk to the Orange, who haven’t had a winning season since 2012 (and only two since 2002.) Here’s the clip they shared, which actually has some pretty great advice, as far as motivational speeches go:

“I learn from people who are brilliant, and I steal knowledge from them. The same is applicable to you: If you see somebody that’s better than you, if you look in your mind’s eye and you know that somebody has something that you don’t, why not ask yourself why. Why not ask yourself how can you get it? Who told you that they get to have a monopoly on greatness? You’re living, you’re breathing, you’re eating, you’re working, how come you can’t get it?”

That’s good advice! And Smith’s delivery style is perfect in this setting. As Matt Bonesteel notes in The Washington Post, Smith typically gets paid well for speeches, and you can see why:

Smith earns between $20,000 and $50,000 per speech, but this one might have been on the house. Syracuse’s athletic director is John Wildhack, a former ESPN executive and a man Smith heaped praise upon when he departed Bristol for Central New York.

The two dined out at a Syracuse steakhouse on Thursday night.

So that explains why Smith would be at Syracuse in the first place. Whether or not the Orange manage to end their run of losing seasons remains to be seen, but if they can’t, it’s certainly not Stephen A.’s fault.