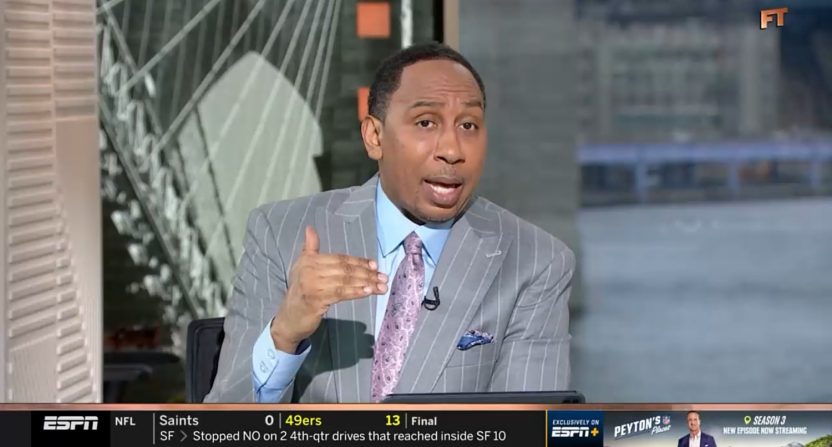 Deshaun Watson met with reporters for the first time since having his suspension lifted this week. The Cleveland Browns’ quarterback chose the strategy of deflecting any non-football questions.

“I understand that you guys have a lot of questions,” Watson told reporters this week. “But with my legal team and my clinical team, there’s only football questions I can really address at this time.”

After being reinstated from his suspension by the NFL, Watson is slated to be the Browns‘ starting quarterback on Sunday against his former team, the Houston Texans. According to Stephen A. Smith on ESPN’s First Take, Watson should have been eager to field non-football questions from the media ahead of his first game in nearly two years.

“I’ve been in this business for many years and obviously I’ve made my share of mistakes and I’m going to continue to make mistakes,” Smith said Friday morning on First Take. “If [someone] made those mistakes and they came to me to ask my advice, I’d be like, ‘Get it over with.’…What you don’t do is prolong people to continue to look for answers that you could immediately provide and then get it over with.”

“I’m giving media advice right now,” Smith continued. “You take the story away! Whatever you can say, ‘I’m here, today, we ain’t gonna spend the rest of this season of me coming back and forth with y’all answering these questions. We’re gonna get it over with now. Ask away.’”

According to Smith, the strategy of refusing to answer non-football questions is not a long-term solution. He believes that eventually the media will get Watson to break when he’s least prepared.

“There is evidence, repeatedly throughout history, that some point in time they implode,” Smith claimed. “And then they give up something that they don’t need to give up.”