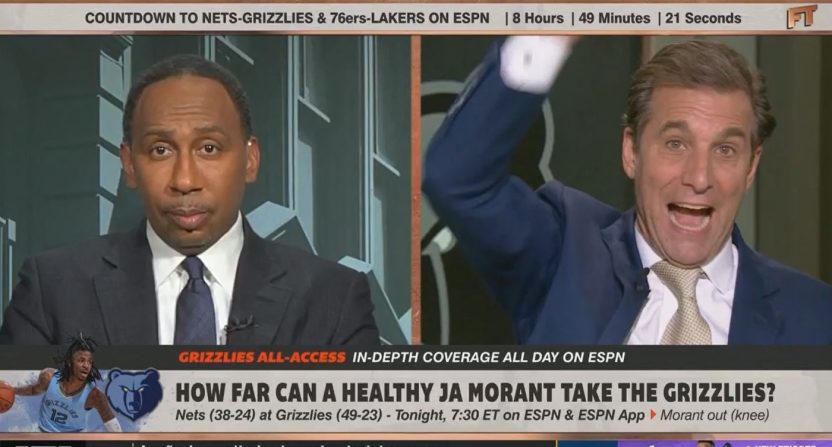 Earlier this week, Kevin Durant fawned over Memphis Grizzlies point guard Ja Morant, comparing him to Michael Jordan and Allen Iverson. But he stopped short of comparing Morant to The King, Elvis Presley.

“So we’re gonna go erase all the Elvis Presley billboards because Morant lost a sixth game in Golden State in the second round of the playoffs?” Russo ranted. “IT DOESN’T WORK THAT WAY! You know better than that, you gotta win some championships! Play in a Finals before you put billboards up!”

As if this debate wasn’t strange enough, Smith went on to prove his love for Presley by singing Jailhouse Rock while showing his blue suede shoes to the camera in a manner reminiscent of Aaron Rodgers proving he didn’t have COVID toe. But it wasn’t enough to convince Dog that Smith fully understands the stardom of Presley.

In true Chris Russo fashion, the former Mike and the Mad Dog star implored Smith to watch Presley’s 1956 appearance on The Ed Sullivan Show, “and THEN TELL ME WE TAKE THE BILLBOARDS DOWN! GEE WHIZ!”

For every sports fan who’s sick of the tired NBA comparisons to Michael Jordan or the seemingly evergreen Mount Rushmore debates, Stephen A. Smith and Chris Russo have you covered. Ja Morant vs Elvis Presley, the sports comparison literally no one asked for.