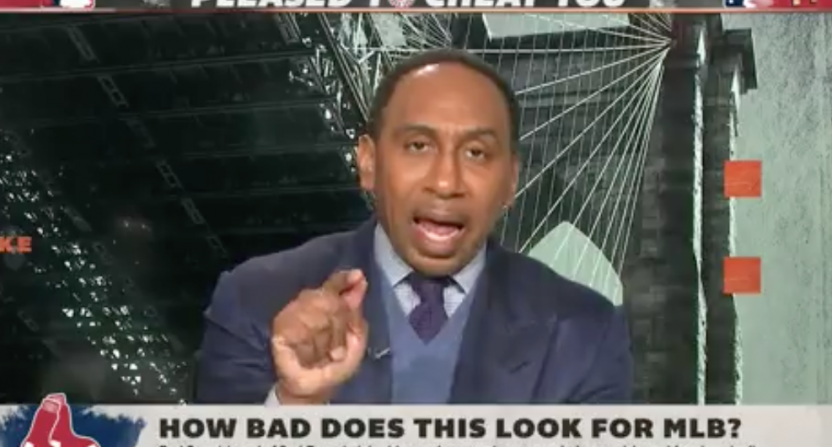 On Wednesday, Major League Baseball finally announced the results of its investigation into the Boston Red Sox’s sign-stealing scheme during the 2018 season. And the penalties seemed very soft, especially compared to the sentence MLB laid down on the Houston Astros for their cheating scandal.

Boston’s replay system operator J.T. Watkins was suspended through the 2020 postseason. And the Red Sox will lose their second-round selection in this year’s MLB Draft. Manager Alex Cora was also suspended for the 2020 season, but for his involvement with the Astros’ sign-stealing scheme. However, Boston had already fired Cora because he was associated with that scandal.

Was MLB light on the Red Sox because no one could be singled out for their role in the sign-stealing scheme (or failed to stop it), like Cora, GM Jeff Luhnow, manager A.J. Hinch, and Carlos Beltran were? How much of a factor was the lack of incriminating evidence, such as the footage Jimmy O’Brien (aka @Jomboy_) found with examples of trash can-banging the Astros used to signal pitches to their batters?

On ESPN’s First Take Thursday morning, Stephen A. Smith offered a different theory for MLB’s soft touch with the Red Sox. And it was quite a stretch. See if you can follow Stephen A.’s logic on this one:

“This is the problem. This is the year 2020 and we still see the disparity, the discrepancy that exists,” he continued. “If you’re a black person out there — because I am a black man and obviously I speak to a lot of black people — I’m here to tell you something right now: This is B.S. If the league was a majority black league, there’s no way in hell that players would’ve been granted immunity.”

Neither Max Kellerman nor Molly Qerim Rose responded to Stephen A.’s assertion. And that’s probably the best way to address Smith’s long, twisted stretch in logic for a blazing hot take. But the remarks were inflammatory enough to draw attention — which is ultimately Stephen A.’s job — so let’s take the bait.

First, there are some who will immediately object to Smith bringing up race, “playing the race card” here. But that’s not what raises an eyebrow regarding his comments. It’s the huge leap in conclusions that he makes.

As Awful Announcing’s Joe Lucia pointed out on Twitter, no Astros or Red Sox players were suspended because the MLB players union (which, by the way, is headed by a black man, Tony Clark) made sure to negotiate immunity for anyone who cooperated with baseball’s investigation.

I mean, the real reason is that the MLBPA (for now) isn’t a weak, pissbaby union like the NFLPA and negotiated immunity for testimony….but it’s easier to draw stupid conclusions

And MLB commissioner Rob Manfred agreed to those terms, realizing that it was the only way he could get players to share what information they knew.

But where’s the connection between the lack of black players in MLB and the light suspension for the Red Sox?

Smith correctly points out the diminishing percentage of African Americans in baseball compared to the workforces in the NBA and NFL. (Black players make up nearly eight percent of MLB rosters, as of 2019. The highest percentage was 18.7 percent, in 1981.)

It’s a significant problem for baseball, on and off the field. There aren’t enough black managers, coaches, scouts, and general managers in the sport. And he’s right to say that there’s a lack of interest among young black athletes in baseball because they don’t see any representation in that sport.

But to then say that MLB would definitely have suspended players in these sign-stealing scandals if most of them were black? Smith is conflating two completely different matters here. There’s no correlation. Stephen A. used this story as an opportunity to rant about the poor representation of black people in baseball. OK, sure — it’s a valid criticism. But it didn’t address the issue at hand.

It’s the worst example of saying something simply to fill air time and to have a take. Tom Smykowski should send Stephen A. one of his “Jump to Conclusions” mats. Maybe that’s how topics and opinions are already proposed on First Take.