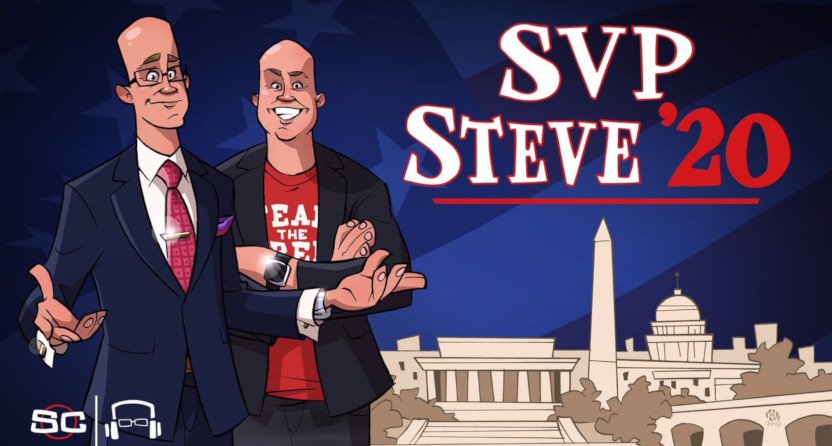 ESPN is set to host SportsCenter from a third city. Most current versions of SportsCenter come from the company’s headquarters in Bristol, Connecticut, with some late-night ones from Los Angeles. Now, Scott Van Pelt’s nightly midnight Eastern SportsCenter (which launched in 2015, added football season Sunday shows in 2017, has found ratings success, and has been one of ESPN’s biggest SportsCenter successes in recent years) will be moving from Bristol to Washington, D.C. in August, and will air from the Pardon The Interruption studios there. (However, it will continue to be produced from Bristol, and only a few staffers will relocate to D.C. as a part of this move.) Van Pelt grew up in nearby Montgomery County, Md., and this was his idea to take the show to D.C. so he could be closer to his aunt and his mother (who turns 80 this summer).

John Ourand of Sports Business Journal has more details, including on how this happened and how it might affect the show’s content:

“I’m proud of where I’m from,” said Van Pelt, who went to the Univ. of Maryland. “Long after I’m not the guy from ESPN, I will always be the guy from Maryland. That’s who I am.” Van Pelt came up with the idea to move back to the DC area in May when he attended the Sports Emmys award ceremony in N.Y. At the event, he spoke with Eric Rydholm, who oversees “PTI,” which won an award for outstanding studio show at the event. “I literally was sitting in that theater thinking, why couldn’t I do my show from the same studio,” Van Pelt said. The next day he called “PTI” producers and show host Tony Kornheiser to see if there would be enough space. When he found a positive reaction, he called his agent Sandy Montag to get the ball moving. After months of meetings with senior personnel like ESPN Exec VP/Content Connor Schell, Exec VP, Event and Studio Production & Exec Editor Norby Williamson and President Jimmy Pitaro, Van Pelt got the green light he wanted.

…“It’s home,” he said. “It’s my friends. It’s the Terps. It’s just where I’m from. I never imagined that there would be a path back there because I work at ESPN and I’m content here.” Van Pelt insisted that the essence of his show would not change despite the move, though he did allow that some changes will occur. “Let’s say Steph Curry and Steve Kerr are in town to play the Wizards,” he said. “They’re not in Bristol a lot. But they come to DC. Maybe we can carve out 15 minutes with players of that ilk. The chance to be face-to-face with those athletes might happen more.”

While this wasn’t a move many might have predicted, it seems to make a fair bit of sense on a number of levels. First, it keeps Van Pelt happy, and he’s one of the more prominent faces of ESPN these days. Second, there’s already a studio there that works for this, and if most of the production’s still going to come from Bristol, ESPN doesn’t have to invest a lot into relocating people. Third, the point Van Pelt makes about getting players or coaches in face-to-face when they come through D.C. is a good one; the Los Angeles-based SportsCenters have done well with in-person interviews, and it’s absolutely much easier to do that from a city with numerous major professional teams than it is from Bristol. And fourth, this will add some more unique flair to Van Pelt’s show (he told Ourand he’s even discussing “a Go-Go version of the SportsCenter theme” to make this even more identifiably D.C.). Van Pelt’s show was already quite personality-based, but letting him do it from his home area may make it even more so.

This also fits in with a growing trend of ESPN boosting its operations outside of Bristol. The biggest recent example of that comes from the New York City studios they opened in early 2018 (after construction delays), which started by hosting Get Up and High Noon (and, briefly, NBA Countdown), then added First Take in September 2018. And for Get Up and First Take in particular, that’s definitely helped them bring in higher-profile guests. There are also other shows from elsewhere, including PTI (which has always been based in D.C.) and Dan Le Batard’s Highly Questionable (based in Miami)/

Putting shows like that in bigger cities rather than Bristol may be appealing for many of ESPN’s talent, as Bristol hasn’t exactly been well-reviewed by many. For example, Keith Olbermann once got suspended for two weeks for responding “Bristol, Connecticut” to a Craig Kilborn question about “The most God-forsaken place in the East.” And many of the ex-ESPNers who have moved to Fox have cited Fox’s L.A. base as a factor in that decision. ESPN used to be more focused on running everything out of Bristol, but technology makes it easier to produce shows remotely, and there are a lot of apparent advantages to having shows originate from places the talent like that also have the ability to easily attract guests. Moving Van Pelt’s show to D.C. is the latest step on that front, but it may not be the last one.