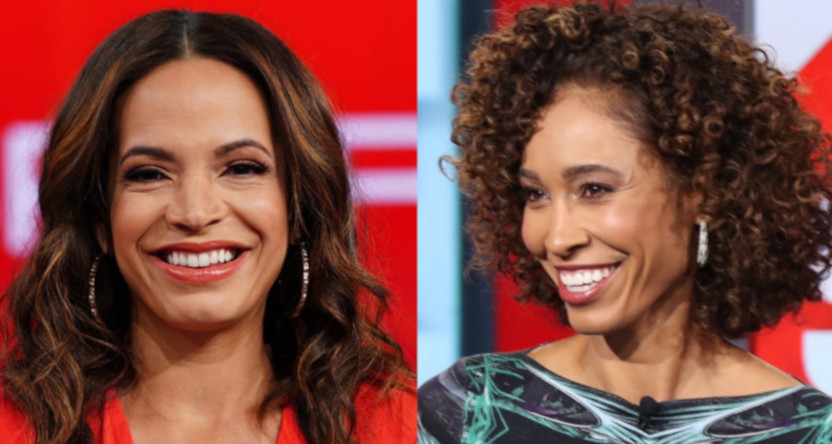 There are some further changes ahead for ESPN’s SportsCenter lineup. As per a release from ESPN’s Andy Hall Tuesday, Sage Steele (who had been co-hosting the 6 p.m. ET SportsCenter alongside Kevin Neghandi since mid-2018, filling the slot previously held by Jemele Hill and Michael Smith’s SC6) will now shift to the noon Eastern SportsCenter alongside Matt Barrie after the College Football Playoff. The regular spot alongside Barrie had been held by Elle Duncan (seen at left above), who went out on maternity leave earlier this month; when she returns in February, she’s now set to join Neghandi on the 6 p.m. SC. Here’s more from that release, which also mentions that Steele (seen at right above) is set to launch a new “periodic interview program” on ESPN+:

Sage Steele will move to the noon ET edition of SportsCenter as co-anchor after the College Football Playoff and will add a new periodic ESPN+ interview program to her slate, while Elle Duncan will move to the 6 p.m. edition in February as ESPN announces the anchor lineups for its signature news and information program for the new year.

Steele, who has co-anchored the 6 p.m. edition with Kevin Negandhi since May of 2018, will join Matt Barrie on the noon edition beginning in mid-January. The noon program also includes the daily OTL on SC segment from ESPN’s Outside the Lines.

Steele, who has conducted interviews with many of sports’ top newsmakers during her time with ESPN, as well as guests from pop culture, entertainment and other areas, will bring that experience to a new periodic interview program that will stream on ESPN+. More details, including its debut date and title, will be announced later.

“We have a very talented and diverse set of voices on SportsCenter and a deep lineup of quality individuals who make up the team,” said Norby Williamson, ESPN Executive Vice President, Event and Studio Production & Executive Editor. “As we turn the page to 2021, we’re doing what we have always done – providing new opportunities for some anchors to experience different shows and pairings while offering continuity and familiarity to our viewers with other editions.”

Duncan, who has most recently been a co-anchor on the noon edition of SportsCenter, will move to the 6 p.m. edition and co-anchor with Negandhi when she returns from maternity leave, which is planned for February. Duncan, who has been a versatile anchor across many editions of SportsCenter, also will continue contributing to other ESPN programs including Around the Horn and Highly Questionable.

As discussed here many times previously, a release featuring a quote from Williamson is rarely anything good. But this one looks like more of a straight swap of Steele and Duncan than anything else. And if anything, that fits in with the Williamson philosophy that no one is bigger than the ESPN brand or the SportsCenter brand; there doesn’t appear to be a lot of need to swap these anchors around, but it helps fit with the idea that the big deal is SportsCenter itself rather than whoever is hosting a specific edition. We’ll see how this move works out for ESPN.