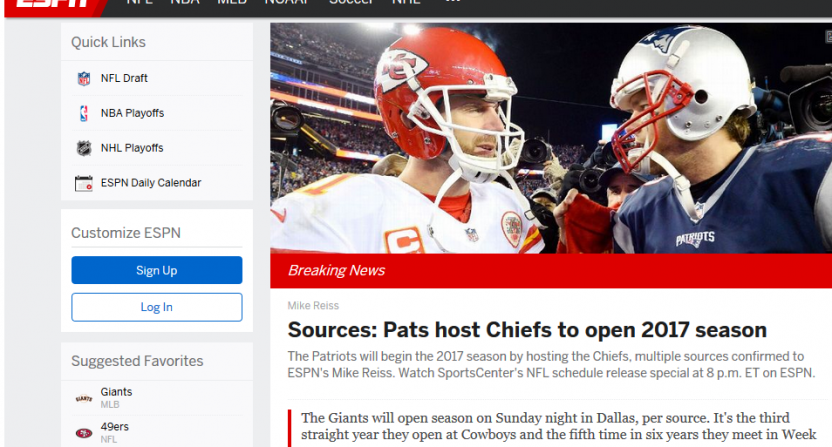 There are always questions about how ESPN’s journalism and business sides co-exist, and on Thursday, the journalism side rightly did something that perhaps devalued a business-side operation. That would be the two-hour SportsCenter Special: 2017 NFL Schedule Release at 8 p.m. Eastern, timed to coincide with the official announcement of that schedule by the NFL. If you went to ESPN.com Thursday afternoon, though, you saw a top-featured news story that spoils several elements of that planned release.

The story isn’t just about the Patriots-Chiefs opener (which had been reported as early as Monday), but about a whole lot of details from the opening week, details that would presumably be discussed on this SC special. Here are some of those other Week 1 details in that story from ESPN reporters around the league:

Oh, and it’s not in that story, but ESPN Deportes analyst Pablo Viruega appears to have announced the second half of that MNF doubleheader:

While it may seem silly to give such play to a story that could potentially lessen the audience for your big schedule release show, handling it this way actually says good things about the journalism-business balance at ESPN. It would be much more problematic if their reporters were told not to report on the schedule while competitors could, or if that reporting wasn’t given substantial play because of business interests.

Moreover, this probably won’t actually hurt the schedule release show much. First off, that reporting was likely to get out there ahead of 8 p.m. Eastern regardless of if ESPN’s reporters covered it. (Consider Mike Francesa reading off the Giants’ whole schedule.) Second off, many of the people who are going to watch a two-hour show analyzing the NFL schedule are probably still going to be interested regardless of if they know a few of the games in advance.

Compare this to, for example, the NFL Draft, where ESPN and NFL Network have both muzzled their reporters in recent years by telling them not to report picks before they’re announced, either on social media or on the airwaves. That’s actually downplaying journalism in service of the TV product, ordering reporters not to report the way they normally would, and letting them get beaten by unrestricted competitors.

While banning reporters from tweeting draft picks isn’t the biggest deal in the world (we’re talking about draft picks, not the Watergate scandal or the Pentagon Papers), it rightfully ruffles some feathers in the media ethics world. Of course, many TV viewers got mad about tipping picks, which is why they made that change. Still, the opposite approach has its merits too; for example, Yahoo’s all-tipping NBA Draft coverage drew a significant audience for an online show.

In any case, it’s good to see that ESPN’s business-driven desire to play up this SportsCenter special didn’t appear to restrict their journalism in this instance. Their reporters did their job in finding out what they could ahead of the schedule’s official release, their website played up that news appropriately, and there don’t seem to have been any corporate restrictions on what the reporters could do. As mentioned above, too, this shouldn’t really be that much of a conflict; there are always going to be schedule leaks, regardless of if they come from ESPN’s reporters or not, so their particular reporting here shouldn’t have a huge impact on the special’s viewership.

If it’s worth doing a schedule release special at 8 p.m. despite so much information leaking ahead of time, it will be worth it regardless of ESPN reporters being amongst those who cover the leaked info. The bigger question may be if it’s worth doing this kind of special at all, but like everything else to do with the NFL, it will probably have an audience. It’s just nice to see that ESPN didn’t tell their reporters not to tip schedule information in service of the TV product, a much different approach than what they take with the draft.