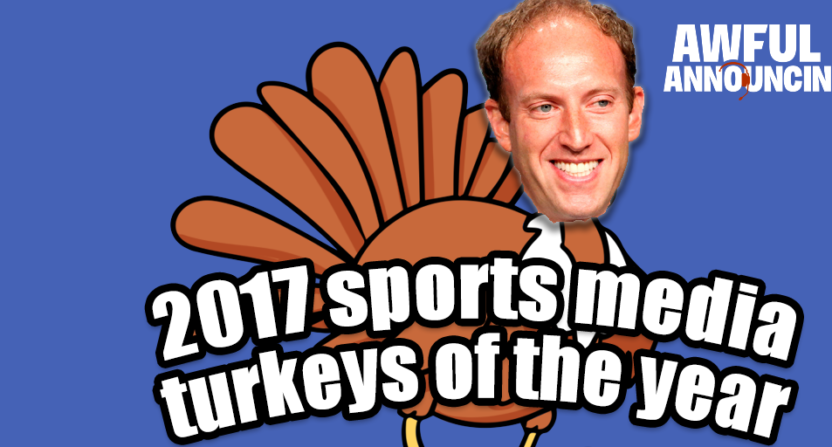 Thanksgiving is this Thursday in America, and the holiday marks a pretty good time to reflect on the year that was. However, instead of sharing what we’re being thankful for in the sports media world this year, we’re going to reflect on the negative.

We wanted to know just who, from whichever network or whichever outlet in whichever role, is the sports media turkey of the year for 2017. There were plenty of viable candidates, given the rash of layoffs at various companies, the numerous social media slip-ups, and relentless trolling by individuals, but here is who each of our staffers decided to choose.

And just for the hell of it, we also asked our readers, based on our choices.

IMPORTANT QUESTION: who is your 2017 sports media turkey of the year?

Andrew Bucholtz: My turkey of the year is a group award given to every producer who has booked LaVar Ball on TV this year. FS1 is primarily to blame for Ball’s rise to an inescapable sports figure, giving him eight TV appearances and tweeting about him 105 times in a two-month March to May span, but ESPN played a role too, giving him three TV appearances and tweeting about him 37 times over that period. They’re not the only ones to blame, of course; plenty of print and radio outlets gave Ball lots of time as well.

But his meteoric rise has a ton to do with those regular sports TV appearances. And Ball was given those appearances not for being a relevant figure (he averaged 2.2 points per game in the NCAA and is the father of a few talented basketball players, but if that’s the standard for ESPN appearances, the airwaves would be overrun; instead, Ball is probably the only current NBA father most people have ever heard of), but because he says provocative and controversial things. Granted, this is the same logic that allows Stephen A. Smith and Skip Bayless to have continued employment, but even they have more impressive media credentials and say less ridiculous things than Ball. (A low bar, to be sure, but a bar.)

Yes, booking Ball has proven to be good for ratings, and that’s ultimately the key goal for those producers, so it’s understandable why they did this. But in doing so, they fed the LaVar Ball hype monster, which has risen to a point of him getting a Facebook show and a 20-plus-minute CNN appearance. (The producer responsible for that latter one is a Grade A-turkey.) And yes, it’s not just the TV producers; viewers and readers care about what Ball says for some reason, and that’s led to us and countless other sites regularly writing about him, and led to his fame skyrocketing to the level where he has feuds with the President of the United States. And we’re all turkeys for listening to him, talking about him and so on.

But the producers who kept, and still keep, booking Ball strike me as the primary turkeys here; they know they’re getting Ball’s insane self-promotional act that feels ripped from professional wrestling, and they keep giving him more and more free exposure anyway, making him into such a media figure that other outlets feel the need to cover him. If not for these producers, LaVar Ball is at best a Twitter personality who maybe features near the end of a couple draft stories. He’s a NBA dad just like every other anonymous NBA dad. But thanks to these producers, he’s now a celebrity making international news for his feuds with the president. I hope they’re happy.

Ian Casselberry: There are a surprising number of candidates to choose from, but I don’t think anyone did more damage to his company and brand than Jamie Horowitz. What he did to Fox Sports Digital with its “pivot to video” was disastrous, undercutting any credibility Fox Sports had as a journalistic enterprise. Obviously, he felt he was in the entertainment business — and sports TV certainly has to factor that in — but sports fans want some substance beyond two to three guys shouting at each other for three hours at a time. And if it’s not available on TV, the network’s website can provide reporting and commentary that goes into more depth on the sports that Fox Sports broadcasts.

This past MLB postseason was outstanding, especially the two league championship series and the World Series. Yet there was no analysis or inside information available on FoxSports,com. Ken Rosenthal’s reporting was on The Athletic. What a missed opportunity. It would be so easy to promote that content during the game telecasts. The same goes for college football. Fox has a greater presence in the sport this season, broadcasting the Big Ten, Big 12, and Pac-12. And it’s been a wild season with plenty of upsets and marquee matchups. But no supplementary coverage and commentary was available on the network’s digital arm.

Horowitz didn’t serve his talent or his audience with his short-sighted decision, and Fox Sports is a less notable entity in sports and sports media because of it.

If he hadn’t gotten fired, he would have gotten my nomination for pivoting FoxSports.com from a legitimate newsgathering site to video. The site is now a glorified YouTube channel, and the move forced many of its writers and web producers to look for other editorial gigs, Some, like Ken Rosenthal, are still employed by Fox, but still write for other outlets. In addition, the traffic has dropped to where it is no longer a true destination for fans.

But a short time after FoxSports.com went all-video, the division fired Horowitz amid sexual harassment allegations. It was a precipitous fall for Horowitz, who was credited for the whole “Embrace Debate” genre that has permeated sports media on ESPN, FS1, and the local level.

It hasn’t been a good year for Horowitz and for that, he is my nominee for Sports Turkey of the 2017.

Ben Koo: I had some inkling to go with John Skipper, Larry Scott, or Britt McHenry but I’ll go with Eric Shanks.

His big bet on Jamie Horowitz blew up in spectacular fashion and along the way, Fox lost Katie Nolan, Dan O’Toole, Jay Onrait, Molly McGrath, and Julie Stewart Binks. The web pivot to video has seem them lose all relevance digitally, a year after burning $90 million investing in DraftKings. Fox’s biggest win in adding Big Ten rights has resulted in plenty of ire from college football fans as games are routinely moved to lesser distributed networks like FS2 and Fox Business Network and shown in disliked viewing windows on Fridays or before primetime on Saturdays.

4 years after the launches of FS1 and FS2, both networks have a pretty toxic reputation with most sports fans and find themselves relegated to not competing with ESPN spanning news, late night, storytelling, fantasy sports, and written content. It’s been a rough year for John Skipper at ESPN, but other than writing a big check for Big Ten rights, I’m not Shanks and Fox can really claim any victory big or small for the last year.

Joe Lucia: ESPN has been in the news a lot this year, mostly for the wrong reasons, and at the center of all of the controversies and poor decisions as been their president, John Skipper. The ESPN layoffs? Skipper was the public face of ESPN that took the beating. Barstool Van Talk’s approval and quick cancellation? Skipper was the one made the eventual decision to pull the plug on the show and his statement about that cancellation was absurd (at best). He’s also the one behind ESPN’s social media policy and the one responsible for letting issues on social media fester all year before finally, sort of, doing something about it that ended up rubbing everyone the wrong way.

In most years, at most companies, having a 2017 like Skipper did would be grounds for firing. Instead, he got a contract extension. So while he may be a turkey, he’s a turkey that is going to be the public face of the network for years to come, for better or worse. On the bright side, that gives him a great chance of retaining his title next year.

Alex Putterman: Clay Travis is probably feeling pretty good about himself right now. In 2017, he has grown his profile, become a cable news sensation and established himself as the go-to anti-ESPN voice in sports media, while powering a forceful backlash against the network.

And yet Travis is my pick for Turkey of the Year because he has built that empire with deception and manipulation. The Real America vs. ESPN framework he applies to every subject is disingenuous at best. The logic he uses to spin every story into an example of liberal PC culture (or something) falters under the smallest amount of scrutiny. As with every attention-seeking talking head, it’s tough to tell where the persona ends and the person begins.

ESPN’s political position is a complex subject worthy of nuanced conversation. Travis eschews that in favor of blustery brand-building. This was the year America learned Clay Travis’ name, but it was also the year Travis announced himself as an intellectually dishonest attention chaser. For that, he is a turkey.

Matt Yoder: My pick is Jamie Horowitz and FS1. Not even the network’s biggest critics could have foreseen the drama and turmoil that would take place in 2017.

Seriously. Where do you even begin? Horowitz’s tenure ending in disgrace amidst serious misconduct allegations? The “pivot to video” that left FoxSports.com a laughingstock of the industry? Turning the network into the Bayless, Cowherd, and Whitlock show? Letting talent like Onrait, O’Toole, and Nolan walk? It’s been a total disaster on every level.