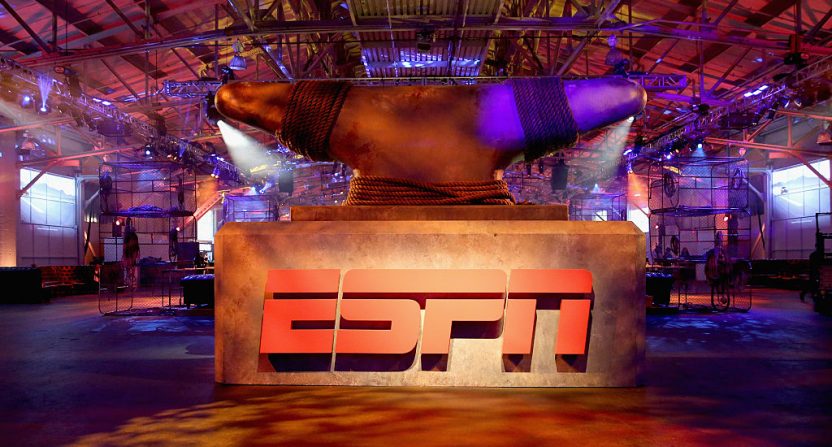 On Wednesday, ESPN laid off many prominent writers and broadcasters for everything from hockey to predictive analytics.

Starting early Wednesday, now former ESPN employees began to notify the industry mostly through Twitter that they were being laid off. On TV, ESPN personalities who weren’t given the axe took the opportunity to pay tribute to their former colleagues.

Meanwhile, both ESPN employees who weren’t fired and writers and broadcasters at other networks took to Twitter to directly praise those who unfortunately lost their jobs and lobby for them to get new jobs quickly.

For 17 yrs I've had a dream job covering baseball for ESPN. Today is my last day. Thanks to all the great people at ESPN, MLB & all of you!

A crushing day to hear about the news about Jayson Stark, Doug Padilla, Mark Saxon and the others who are leaving ESPN. Devastating.

Jayson Stark has been THE BEST at what he does for decades, and a true inspiration personally and professionally for decades. Unfathomable. https://t.co/QvHVQBNgHp

@jaysonst The nicest person I could ever hope to meet in any field, and a gigantic influence, every day. Thank you Jayson. For everything.

@jaysonst So sorry to hear this, Jayson. Thinking good thoughts for you and your family.

@jaysonst This one really, really hits hard. Though I know your free agency will last the length of a Clayton Kershaw inning, so sorry to hear this.

@jaysonst The most useful useless information in baseball. Jayson, you are a powerhouse free agent. Someone's staff is about to get a lot better.

After 17 years reporting on #NFL, I've been informed that I'm being laid off by ESPN effective immediately. I have no plans to retire

Disappointing news Ed Werder is leaving ESPN☹️ one of the 3 amigos…Berman,Mort and Ed. Great guys and much respect

@Edwerderespn So sorry to hear this Ed. Looking forward when you announce your new career chapter and you are right. It will not be retirement!

@Edwerderespn Thinking of you friend. You are so talented and I have no doubt you will not be a free agent for long.

@Edwerderespn Ed, I'm so sorry. I have enjoyed learning from you and laughing with you. All my best.

@Edwerderespn I'm so sorry to hear this, Ed, for you and so many other great people with the company. Best wishes wherever you go from here.

@Edwerderespn I hate to see & hear this, Ed. It was an absolute pleasure to work with you & get to know you over the years. My best to you & your family.

Laid off by ESPN today.Although sad cause I loved my job, mostly filled w/gratitude & appreciation for the 9 years #GreatFriendsAndTeammates

@TDESPN Hate it bro. Thanks for all the great help and insight over the years.

@TDESPN And for how many people you've worked countless hours to mentor and help along the way.

@TDESPN Honored to work with you on the @Elite11 back in '15. Wishing you the best on your next chapter. You'll be missed

Super Bowls, The Trifecta and stories like the one up now are the moments I'll take with me into free agency starting tomorrow.

@janesports I'm so, so sad to hear this, Jane. You are the best.

@janesports Jane: You are brilliant, witty and a model of integrity. I'm better for knowing you. I'll read anything you write anywhere (To North Beach!)

@janesports Jane, I'm so sorry to hear this. You're too talented not to land on your feet somewhere soon.

@janesports So sorry, Jane. Really enjoyed getting to work with you, I can't imagine youll be a free agent for long. Best wishes.

@janesports So sorry to hear this, Jane. We'll follow you wherever you land ❤️

After 5 great years, I’ve been laid off by ESPN. It was a tremendous opportunity & I enjoyed working w/a lot of really, really good people

@McMurphyESPN So, so sorry to hear this, Brett.

@McMurphyESPN A pleasure working with you, Brett. So much talent in your family. Be good.

@McMurphyESPN So sorry to see this buddy.. You're one of the hard-working ppl I've ever been around in the biz and I'm sure you'll land on your feet.

Poured my heart and soul into ESPN for last 8 years. Moved my wife and 3 kids to CT to go "all in" 5 years ago. Bummed it ended in 3 minutes

@dannykanell Shocked by this. You are so engaging & talented. It was an honor to work w/ you & I can't wait to see what bigger & better gig you get next.

@dannykanell Listened to you and Ryen EVERY DAY. Absolutely heartbroken to hear this. Best of luck to and all others affected by this today.

@dannykanell "For I know the plans I have for you, plans to prosper you and not to harm you, plans to give you hope and a future."

Add me to the list. Just got the 'call.' I've been informed my contract will not be renewed at ESPN.

@ESPNDanaOneil I'm so, so sorry to hear this. Always love your work & know we'll be together in another press box soon.

@ESPNDanaOneil So sorry to hear this, Dana. Thinking of you and wishing you the best wherever you go from here.

I was only at ESPN for 4 years, but they were some of the best of my career. Thanks to all of the fans and to my entire SportsCenterAM crew. pic.twitter.com/gxKuUh13ck

@jaymee @sarina @RandyScottESPN @JayHarrisESPN @KNegandhiESPN @bflay Thanks so much for bringing Little League stories to life! Best of luck and you're always welcome in Williamsport.

@jaymee @sarina @RandyScottESPN @JayHarrisESPN @KNegandhiESPN @bflay @LittleLeague oh no. so sorry to hear this jaymee. love watching sports center am. my daughters love watching you every am. you are great.

@jaymee @sarina @RandyScottESPN @JayHarrisESPN @KNegandhiESPN @bflay @LittleLeague Awful news…you have so much positivity and talent to share. I loved watching you and can't wait to follow your career to bigger things. ❤

After 14 wonderful years my time at espn is over. From Cold Pizza to First Take to SC I made more friends than I can name. Forever grateful! pic.twitter.com/WNkUGuXeVl

@jaycrawfordespn We will miss you in Williamsport! Best of luck!

@jaycrawfordespn I remember being on set with you for Cold Pizza in 2004. That was a huge honor. Sorry and Good luck, can't wait to see what's next for you!

@jaycrawfordespn Our best to you, Jay. We know you'll land on your feet!

While those names listed above were some of the biggest, many other notable ESPN broadcasters and writers were let go as well. Additionally, many still at ESPN and those outside of Bristol decided to both address those who lost their jobs directly on Twitter and take the time to thank everyone at once for their work at ESPN.

These are good people.

ESPN is saving money on shoes by cutting off feet https://t.co/Dx8cAdNgKS

Great laid-off @espn reporters who want to do investigative work, either on sports or other subjects, should get in touch with @Propublica.

As someone who has been laid off, I can't begin to explain how sickening it is that this all plays out publicly. I wish everyone there well. https://t.co/jBw1tebbsn

It is immensely frustrating on this day to know that ESPN management was willing to pay Skip Bayless millions of dollars last year to stay.

For most of @espn history, growth was engine. More was better than less. Sooner better than later. That's all far from guaranteed now. #ESPN

As you see more names on @espn layoff list, it will be hard in many cases to capture exact reasoning for one who leaves vs. one who stays.

A lot of @ESPN talent laid off today wrote a lot of stories I wished I had written. Hopefully the industry finds room for these folks.

This is a heart-tearing day. For ESPN not to understand that no one eclipses Jayson Stark in creativity, integrity, joy of the game. And

As one who was on the first Baseball Tonight, it has always been a part of me. Or was. I loved that show. I wish I could reach out to..

everyone impacted by cuts, but right now think how this cuts at the heart of John Walsh, to whom thousands are indebted to his genius

Media people who take pleasure in hearing about ESPN layoffs had best not celebrate too much. The industry is changing and no one is immune.

J-school isn't teaching me that making up opinions and screaming them into a camera will land me a job. ESPN apparently disagrees.

I'm young and I don't know it all. But I know the importance of strong, substantive reporting and the message sent today is terrifying

Heartbreaking to see so many lose jobs at ESPN today, seeing @jaysonst as part of it, well, that just ratchets it up personally

The amount of people on the internet taking glee in the fact that ESPN is laying people off today is absolutely despicable.

Sucks what happened at ESPN. Sucks that many good people lost their jobs. Also sucks to see some people celebrating it.

Good luck to the ESPN people today and moving forward. This is tough.

Hate it for some of the folks at ESPN. But being laid off presents more opportunities (I know from relatively recent experience).

Raising a glass to all our friends at ESPN. Dreadful watching a ton of talent with families and loved ones impacted. To better days for all

Much love to all those affected by today's ESPN layoffs, esp excellent Grantland alum @TheM_L_G. My Rolodex is your Rolodex, just holler.

Maddon opened his pregame briefing by offering sympathy to @jaysonst and others at ESPN who lost their jobs.

There were many other posts and there will continue to be over the coming days. It’s a rough and sad day in the sports media industry.