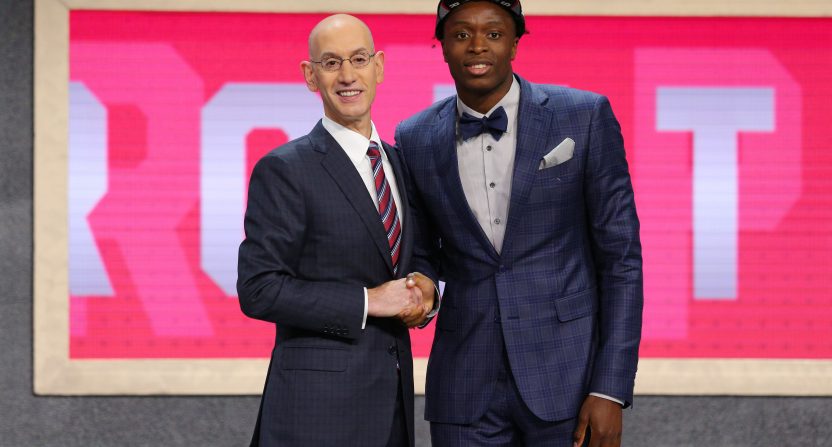 For better or for worse, Adrian Wojnarowski’s Twitter feed will no longer be several picks ahead of the NBA Draft broadcast this year.

Multiple sources tell Awful Announcing that ESPN has instructed its reporters to refrain from revealing picks on social media before they’re announced at Thursday’s draft, breaking with how the network has operated in the past. Previously, ESPN’s insiders (or at least the ones who didn’t appear on the draft broadcast) have been free to report NBA Draft picks as soon as they learn of them — in contrast to how things work during the NFL Draft, when ESPN and NFL Network annually agree to hold off until the picks are read from the podium.

The source said ESPN’s directive not to tip picks this year was presented as an edict from the NBA itself. An ESPN representative declined comment Tuesday.

[UPDATE: NBA spokesman Mike Bass issued the following statement to Awful Announcing: “We spoke with our media partners about our preference that ESPN’s exclusive broadcast rights be honored, but each organization will make its own editorial decisions.”

Additionally, a source told Awful Announcing that other NBA partners, including Turner Sports and Yahoo (which is newly owned by Verizon), will also not tip picks during the draft.]

It’s likely no coincidence that this reversal from ESPN and the NBA coincides with Wojnarowski’s arrival in Bristol. When Woj worked at Yahoo, which is not an NBA rightsholder, the league would have had little to gain by asking ESPN to hold off on reporting picks, and ESPN would have had little to gain by agreeing, because Woj would have continued to reveal them anyway. But with the king of NBA breaking news now working for a broadcast partner, the league and the network apparently hope to keep the picks relatively quiet on social media until Adam Silver reads them on the broadcast.

It’s worth noting that Woj would have likely been held back from reporting picks on social media even without this new policy, given that he will appear on the draft broadcast itself and ESPN has previously prevented on-air analysts from tipping picks. Despite not reporting on picks, Woj will have an active role on the ESPN broadcast, breaking various types of draft-related news, a source said.

Of course, the decision to handcuff ESPN’s reporters when it comes to tipping picks comes with tradeoffs for all involved. The NBA often gets credit for fostering a robust social-media community, but here it’s funneling fans back to the television broadcast. ESPN hired Woj and other top reporters to establish itself as the go-to outlet for NBA breaking news, but now it will be inhibiting those reporters’ ability to, you know, break news (although Woj has said he hopes to focus his draft-night reporting on trades anyway).

And as for the fans? Feelings tend to be mixed when it comes to draft-pick tipping, with some diehards craving the news as soon as possible and others preferring the drama of the draft broadcast. This year, however, fans will have little choice in the matter. If they want to know as soon as possible whom their team will draft, they’ll have to watch the broadcast.