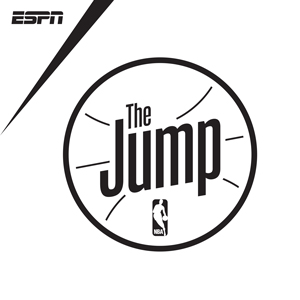 What Is It?: It’s the podcast of ESPN’s year-round NBA show. The podcast is the audio of that day’s episode.

Who’s The Host?: Rachel Nichols is the ringleader of The Jump, which was her brainchild upon returning to ESPN. It’s as if she’s casually talking about the NBA with her friends, just that those friends happen to be top media members and smartly opinionated former players. Panelists include Zach Lowe, Scottie Pippen, Byron Scott, Stephen Jackson, and Brian Windhorst. Kareem Abdul-Jabbar has also made a handful of appearances on the show, which is freaking epic.

What’s a Normal Episode Like?: There are two main types of segments that I hear on the show: monologues and discussions. Usually, the show leads off with a Nichols-narrated monologue about an NBA-related issue or topic. Later on, the show’s panelists discuss various issues, both on- and off-court. There is also “Make or Miss,” which is similar to the cheers/jeers of SportsNation.

While the DeMarcus Cousins saga with the Sacramento Kings was happening, The Jump had a regular segment about that drama called As The Kings Turn. (Side note: if Jalen vs. Everybody got a pilot, As The Kings Turn should get one, too.)

Who Is It For?: This is a show for NBA fans who want a multi-faceted explanation and discussion of the league’s news. Former players will have a different perspective compared to Nichols and other media members, which can shed light on the complexities within storylines.

Who Is It Not For?: Michael Rapaport, for one. People who think they know everything about the NBA and that it can all be explained by Lil’ B’s raps and ridiculous conspiracy theories will probably ignore this show.

Sexist male sports fans who don’t want a woman sharing her opinion won’t want to listen to a show driven by the brilliant Nichols. It’s a shame because she is truly one of the best and brightest currently covering the Association.

Can I Jump Right In?: Every weekday brings a new episode full of new storylines to break down. While that means any day’s show is a good one to start with, it also means most episodes are outdated within about 48 hours. Some news lasts longer than a few days, but most of this show’s topics revolve around the immediacy of games and results.

What’s Not Great?: Most of the athlete co-hosts are insightful and sound like analysts, but there have been a few times where they fall flat. It isn’t the easiest job, and it doesn’t happen often, so it’s definitely forgivable. Also, there aren’t enough appearances by “Grumpy” Zach Lowe on the show.

It will be interesting to see how the show copes as it enters its first off-season on the air. Now that The Jump is year-round, I wonder how it will change format when there are no games to cover. Will the show focus on fun like The Starters or pivot to salary cap minutiae like Dunc’d On? Will LaVar Ball be a recurring guest or will there be a “swear” jar for any utterance of his name? I have no idea, but I am confident Nichols and co. will find a successful niche.

So, Should I Listen To This?: ESPN has a gem of a daily NBA show that utilizes the network’s numerous former players and insiders in ways that are both light-hearted and engaging. It is among the best NBA shows on TV, which, by extension, puts it among the best NBA podcasts. The Mothership was brilliant to give Nichols this platform.

Bottom Line – TL;DR: Rachel Nichols is a respected voice covering the NBA with a strong vehicle in The Jump.