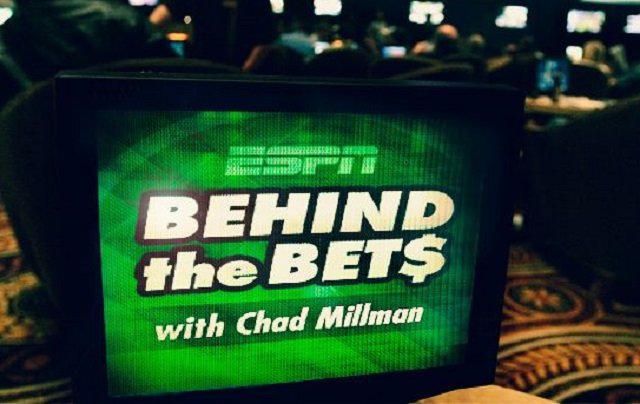 Podcast: Behind the Bets

What Is It?: It’s a betting podcast that not only talks about lines from a bettors perspective, but also a line-making point of view. As the name implies, it’s a look “behind” the bets, compared to typical picks podcasts (lookin’ at you, Bill Simmons). During football season, it’s three podcasts in one!

Who’s The Host?: The main midweek podcast is hosted by Chad Millman, ESPN’s Vice President and editorial director of domestic digital content. During NFL season, he is joined by Bob Scucci, the director of Race and Sports for Boyd Gaming, which owns and operates 24 properties in seven states, highlighted by the Orleans in Las Vegas. The podcast is referred to as the “Scooch Pod,” with Millman joking that he’s really the show’s guest.

The other midweek podcast is a Behind the Bets spin-off, The College Years. It’s about college football, and it’s hosted by “Stanford” Steve Coughlin, who also works on Scott Van Pelt’s midnight ET SportsCenter, and Chris “The Bear” Fallica, who also works on College GameDay.

On Fridays, Doug Kezirian and Anita Marks make NFL and college football picks. Kezirian is a former sports anchor and radio host in Las Vegas who also hosts ESPN Radio’s College GameDay and sometimes fills in for Millman on the Scooch Pod. Marks also does work for ESPN New York and ESPN proper, including hosting a fantasy football podcast. They are usually joined by Phil Steele and/or Rufus Peabody.

Outside of football season, it’s anybody’s guess what episodes are like. In the past, Millman has looked at other sports from a more zoomed out perspective instead of a week-by-week breakdown.

What’s A Normal Episode Like?: The Scooch Pod recently got new, dramatic intro music, despite listeners – and Scooch himself – wanting other options when they were first presented. Whether it’s Millman or Kezirian hosting, the host cedes to the bookmaker. Millman is a little more comfortable with Scooch because he’s known him longer, including profiling him in his 2001 book The Odds, but both hosts have a witty and humorous rapport with Scucci.

Millman and Scucci go through the week’s NFL games, with Scucci explaining why the line is a certain number and how it’s changed since betting opened. As a bookmaker, he mentions how many tickets he’s received on each team, how the public is betting, how the “sharps” (professional handicappers) are betting, and what results he would like to see for the benefit of the book. The podcast is also full of Scoochisms and Millmanisms, sayings that the two repeat to explain the lines and justify their picks. At the end of each episode, the two make their “Scooch Roulette” picks, their locks of the week.

The College Years spin-off is just what you’d expect: college football picks. Instead of a chat with a Vegas insider, it’s two bettors explaining their rationale for why they chose certain teams. When they debate games, they have insights on both teams and discuss both sides, even if they agree on a pick. Their second bowl game podcast includes a great breakdown of the College Football Playoff semifinals. But it shares little-to-nothing with the main show, with a different style, format, and focus compared to the main show.

Kezirian and Marks know their stuff on the Friday pod, but it feels more like a supplement than a standalone. They make picks and get really interesting insights from their guests, but after hearing picks on Wednesdays, it doesn’t really add too much. It’s still a good show, but it feels unnecessary. Bill Simmons does two betting podcasts, but one is guessing lines while the other is picking lines. Three picks-focused podcasts feels a bit repetitive and excessive.

Who Is It For?: Obviously, it’s for people who like placing a friendly wager on games, especially football. It analyzes games from a niche perspective, but it might give you an edge when betting on games each week. If you read ESPN Chalk, you’ll enjoy this feed, though I almost wonder if it wouldn’t be better to pivot and rename the feed ESPN Chalk to connect it to the vertical.

Who Is It Not For?: You won’t find any hot takes, fabricated drama, fantasy stats, or faux-nalysis from former players on this podcast, but you’ll get some dramatic intro music and maybe even a steamy take on the Scooch Pod.

Can I Jump Right In?: The Scooch Pod has some inside jokes that will take a few episodes to get used to. The other two shows are more typical picks podcasts, which means you can listen on a week-by-week basis.

What’s Not Great?: I’m not a fan of all the podcasts being on the same feed. They’re all good on their own, but they feel detached from each other, a la The Ringer‘s Channel 33 feed. While I like Millman as a host, I wonder if there would be more consistency from Kezirian hosting all three podcasts. He knows both pro and college football and could give an overarching voice to the shows. It would give Behind the Bets a single style instead of three separate podcasts thrown together on the same feed because they’re all about betting.

Each show is solid on its own, though there is something special about Bob Scucci, both in his perspective and his personality, that makes me wish he could be on more often. I get it, he has a (probably) very lucrative day job, but I still want more Scooch.

So, Should I Listen To This?: It’s three good betting podcasts on one feed, which is the best and worst part of Behind the Bets. While only one of the podcasts – the Scooch Pod – technically goes “behind” the bets, all three podcasts give strong insights into picking games. That said, it feels disjointed and repetitive to have them on the same feed because they lack a single voice and style. I think the shows might be better off on separate feeds, but I’m not sure The College Years or the picks podcast would have enough of a following on their own.

I think the Scooch Pod is a must listen, even if you’re not a big follower of sports gambling. The College Years is a good show for college football fans, even those with merely a tangential interest in betting. But after having listened to those two shows, the Friday podcast doesn’t add a ton of freshness to the feed unless you crave more betting insights.

Bottom Line – TL;DR: It’s three great sports betting podcasts on one feed, but it feels like overkill for listeners who aren’t avid bettors.