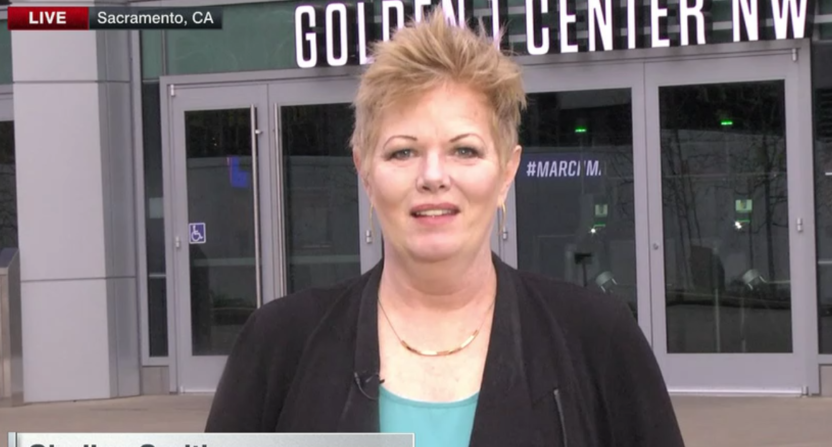 The aftermath of Sunday’s first game of the Golden State Warriors – San Antonio Spurs Western Conference Finals saw a frightening moment in the Warriors’ locker room, with ESPN’s Shelley Smith being attended to by medical staff and then taken to hospital for further evaluation. Smith later told Janie McCauley of The Associated Press that she was evaluated for a possible stroke:

Smith shared details with The Associated Press via text message and reported “I’m good” after the ordeal, which she said was being evaluated as a possible stroke. Fortunately, a Golden State team doctor was nearby and Smith was immediately moved to the training room to be attended to by the medical staff. She was then taken to a nearby hospital for further evaluation.

Smith tweeted from hospital that she’s doing okay and waiting for test results, and expressed her thanks for the support that was sent her way:

Warriors’ PR director Dan Martinez tweeted about how he was impressed by the team’s medical staff and their quick action:

Saw some real-life frickin heroes in action today…and it had nothing to do w/ game. Thankful to work around such talented & caring people.

“Following the Spurs-Warriors game, Shelley Smith felt ill and was taken from Oracle Arena to the hospital. She is now alert and responsive. Shelley has consistently proven that she is truly a warrior and her continued strength has been a source of inspiration to so many. We send her the very best wishes for a speedy recovery. We will share more information as it becomes available.”

It’s good to hear that Smith is doing all right in hospital. She’s been through a lot over the years, including a battle with breast cancer, and she’s become a prominent advocate for the need for regular physicals. Tom Hoffarth of The Los Angeles Daily News just ran a big profile on Smith, her mother Luanne and her 31-year-old daughter Dylan Tharpe (who until recently was a features producer for The NFL Network), and there are plenty of quotes in there that show just how impressive Smith is. Such as this one:

Still, we haven’t got to the subject yet of Smith’s own breast cancer and melanoma recovery the last couple of years, Tharp’s move this week away from Southern California try a new adventure after her job as an NFL Network features producer in Culver City was eliminated in a company reorganization, how both joined emotional forces again after the passing of Smith’s sister last December, and then all the other stress from surviving the recent round of ESPN layoffs.

“This is what happens,” Smith will say, “and you just roll with it. It’s a matter of how you turn something that’s crummy into something positive.”

“She’s a warrior,” Dylann says of her mom.

Smith is that indeed. Here’s wishing her all the best in her recovery.