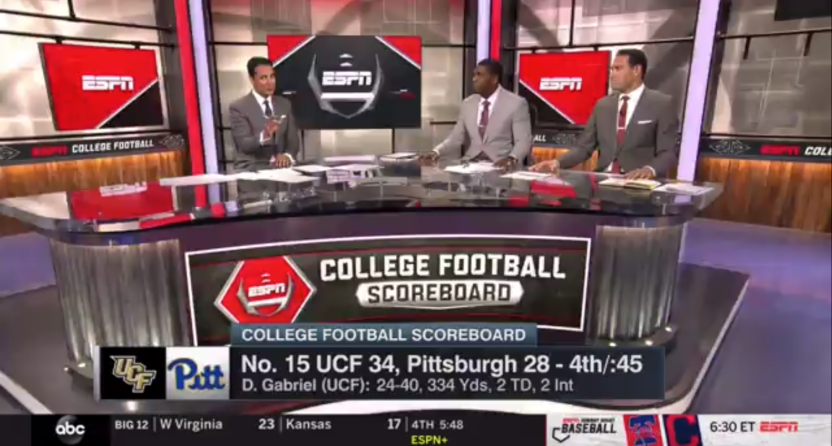 The Pitt Panthers pulled off one of the biggest upsets of Week 4 in college football Saturday, picking up a home 35-34 win over the No. 15 UCF Knights. That marked UCF’s first regular-season loss since 2016. However, many viewers who were watching on several ABC affiliates around the country didn’t get to see the ending, at least not on that channel (and not with any indication of where to go to find it).

A confluence of several factors likely played into this. First, this was a game broadcast on either ABC or ESPN2 depending on your local market, with Washington-BYU on the other one. The game also ran long; it was a 3:30 p.m. Eastern start, but didn’t wrap up until close to 7:30 p.m. Eastern, after the planned 7 p.m. Eastern start of Old Dominion-Virginia (which wound up being pushed to ESPNEWS). But this still led to an interesting situation in a lot of markets, with ABC coverage of the Pitt-UCF game vanishing in the final minute after Pitt went for it on fourth and three and scored to tie the game at 34 (they’d then take the lead on the extra point).

Here’s how this played out on KGO (ABC 7) in the Bay Area, which was initially televising Washington-BYU, but started showing UCF-Pitt after that game ended (so with over six minutes left in the fourth quarter of the UCF-Pitt game). They got that Pitt touchdown and the extra point and some replays, but soon after that, and before the ensuing kickoff (with 56 seconds left), they cut to ABC’s national college football studio for discussion of the touchdown play:

There then was some further discussion, an “I promise you, we’re going to get to Pitt in a second,” and discussion of what could be ahead.

But on KGO, that then led to a promo of the upcoming Oklahoma State-Texas game, and then a commercial break. And that was a regular multiple-minute commercial break, and when the station came back, it was with a local news update.

And KGO wasn’t the only station to do this. There were complaints from plenty of viewers around the country:

I cannot believe ESPN and ABC turned the Pitt/UCF game off. Absolutely ludicrous with UCF driving for the win

@KHOU the jackhammers at ABC 13 interrupted the Pitt – UCF game so we could watch their jagoff reporters spout nonsense. Didn't get to see the end of a really good game. Sphincters!

Would have been nice to see the end of the Pitt v UCF game, but ABC decided to cut to my local news cast instead. Looking at you, @wzzm13…

In the Bay Area at least, the game did run to its conclusion on ESPN2, but there was no on-air or on-screen indication that viewers needed to move over there. (And also, broadcast ABC is in about 35 million more homes than cable ESPN2, so pushing a close ending from a broadcast network to a cable network would seem subpar even with notice.) Thus, the handling of this looks like a pretty significant miss for ABC’s college football coverage. Fortunately for them, UCF didn’t manage to come back, so this wasn’t a full “Heidi Game,” but it certainly had that potential. And even with this ending the way it did, it was still pretty annoying for many watching the game on ABC to be promised that they’d see the ending, only to instead get commercials and local news.