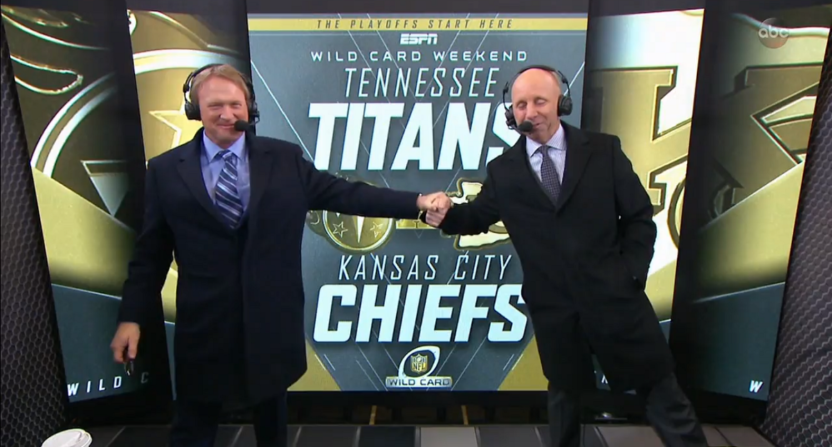 The Monday Night Football booth always receives a lot of discussion and a lot of criticism, and the 2016-17 run of Sean McDonough and Jon Gruden is no exception. That pairing (seen above on their final broadcast) didn’t take quite as much criticism as the two booths that followed (Joe Tessitore, Jason Witten, and Booger McFarland in 2018, Tessitore and McFarland in 2019), but it took a lot more than the previous pairing of Mike Tirico and Gruden, and it featured a lot of awkward on-air moments.

It’s interesting to consider why that might have been, and McDonough himself has been vocal on this. In March 2018, he spoke to WEEI about how excited he was to return to the “more fun” world of college football, and about some of the issues he had with the MNF broadcast and with its level of focus on Gruden. This week, McDonough (recently announced as the lead play-by-play voice for ESPN’s NHL coverage when that begins this fall) spoke to Jimmy Traina on the Sports Illustrated media podcast, and he brought up a different issue with that MNF broadcast: how he was given instructions from management that didn’t fit with what Gruden wanted to do. The full podcast is available below; we’ll get to some quotes in a minute.

Here are a few quotes from that, from Traina’s writeup:

“When I was hired, part of what I was instructed to do was to try to make it more conversational. Make it a little lighter, bring out more of Jon Gruden’s personality that you used to see from time to time on that quarterback show that he did, QB Camp, and get into more storytelling. …

“I think, to be totally candid, Jon Gruden enjoyed the X-and-O part of it. He loved the telestrator. He told me when I first got the job, ‘I don’t like stories.’

“There were times it came across as being awkward, and it was awkward. It was awkward for me. You’re standing there next to somebody wondering, ‘If I ask him a question about this, is he gonna answer it or is he gonna be annoyed that I asked him?’ So it was uncomfortable.”

Traina’s full piece there is worth reading for more context, including McDonough saying that he’s not trying to be critical of Gruden and that he thinks Gruden is great at the Xs and Os. And, before we go further, it is worth mentioning that McDonough’s candidness here is appreciated; many people wouldn’t be as outspoken about this as he has been, especially when they’re still at the same company, and having his comments on the record (from both the 2018 interview and this one) is helpful for those looking back at the history of Monday Night Football and the history of that booth in particular. With that said, though, McDonough’s comments here lead to a lot of further questions for him and for ESPN management of why this “uncomfortable” approach was allowed to go on for two years, especially with McDonough also telling Traina that he thought this might not work as early as the first game he called with Gruden.

First off, the conflict in approach here should have been recognized and addressed long before any broadcast. Monday Night Football does not appear to be something where two commentators meet for the first time and call a game together; there would seem to be countless internal discussions and production meetings ahead of that, especially considering that McDonough was announced as taking that gig (replacing Mike Tirico, who left for NBC) in May 2016, four months before the season started.

Consider that when Tessitore, Witten and McFarland were announced in May 2018, they spent time on a media call talking about the relationship-building conversations they’d already had, and their plans to have more, and their thoughts on what each person brought to the table. That call also featured production executives like Stephanie Druley talking about how they envisioned each person’s role. Granted, that booth didn’t work out either, but it certainly seems like there would have been similar discussions amongst McDonough, Gruden, and ESPN management about what to do with that broadcast that fall.

(Update: This 2016 piece from Matt Terl at The Incline discussing the pre-game meetings ahead of McDonough and Gruden’s first broadcast together sure makes it seem like they would have discussed on-air approaches to take, especially with Gruden going down to the level of asking for a clip showing a cornerback playing on a specific side. If he was doing that, it seems surprising that it would be possible for McDonough to not know what questions he could and couldn’t ask Gruden on the telecast.)

In fact, McDonough discusses that in his comments to Traina, saying that Gruden told him “‘I don’t like stories” when he first got the job, and that ESPN management told him “to try to make it more conversational.” Those are opposing approaches, and the conflict there should have been identified well before the McDonough-Gruden team ever went on the air. And there should have been a resolution, either of management backing off the “make it more conversational” instructions to McDonough, or of Gruden saying “Sure, I can try to be a bit more conversational.” At the very least, McDonough and Gruden and the production team should have had some off-air conversations to the point where McDonough was no longer wondering “If I ask him a question about this, is he gonna answer it?” That should have been known and resolved, one way or the other, to a point where the questions either were answered or weren’t asked.

Even if by some circumstance this wasn’t identified as a problem until the actual first broadcast, it’s also remarkable that it wasn’t corrected after that. If McDonough could tell that it was “awkward” and “uncomfortable,” so could countless viewers. And there are big questions to be asked about why the approach wasn’t changed, either to McDonough finding ways to let Gruden shine at what he wanted to do (which is what Tirico did before him for almost a decade, and the Tirico-Gruden booth got generally strong reviews) and abandoning the “conversational” edict, or to Gruden meeting him partway. As the often-cited quote goes, “Insanity is doing the same thing over and over again and expecting different results” (which, incidentally, is likely a formulation that comes from Alcoholics Anonymous and/or Narcotics Anonymous in the 1980s, not from Albert Einstein). If everyone knew this approach conflict wasn’t working, why wasn’t the approach changed?

To be clear, that’s not all on McDonough, or even necessarily mostly on him if he was given specific instructions to “make it more conversational” and if those instructions weren’t changed after it was clear that wasn’t working. The biggest questions here are for the ESPN team overseeing Monday Night Football, especially around why they didn’t recognize this was a conflict in the first place, and why they weren’t willing to change approaches after it became obvious their “conversational” plan wasn’t paying off.

And that’s part of a larger run of questions around MNF in recent years, including the decision to hire Witten, who never seemed to show much interest in doing the work needed to be a thoughtful analyst (instead, he spent more time going after critics), and the decision to put McFarland in the awkward sideline “BoogerMobile” and not go away from that until late in the year, even after that approach was drawing huge criticism (including from fans who had their view blocked, and from viewers who found the “Two and a Half Men” booth approach awkward).

The big takeaway from all this may be that productions need to be less rigid, and more adapted to the strengths of the people involved. Gruden clearly wasn’t a bad analyst overall; while some of his particular tics, including “THIS GUY!” and “SPIDER 2Y BANANA!” got old, his work with Tirico in particular was generally quite well received (they were ranked fifth out of 15 national booths in our 2014 fan-voted NFL announcer rankings). McDonough clearly isn’t a bad play-by-play commentator overall; he’s found a lot of success, and has won a fair bit of praise. But putting those two guys together, with very different opinions on what a MNF broadcast should be (and different instructions, even, when it comes to the directions McDonough received), and not either proactively or reactively addressing that conflict, just sticking with it for two years? That’s questionable.

There could have been all sorts of ways in which this did work out. If McDonough hadn’t been given the “more conversational” instructions, or if he had modified them (with or without permission) after it was clear that approach wasn’t working, maybe that would have paid off. If he really didn’t want to do an “analyst showcase” focused on Xs and Os, maybe he shouldn’t have been picked for the MNF job while an analyst with that approach was in the other chair. Or if Gruden had been more willing to go towards what McDonough (and management) wanted, maybe the broadcasts would have been less awkward. Or if Gruden and McDonough had even had the minimum of off-broadcast conversations about what questions would and wouldn’t work, maybe there would have been a better product. Instead, we got a play-by-play commentator and an analyst pulling in different directions, and no apparent intervention from management to solve the problem, and two very “awkward” years indeed of MNF broadcasts.