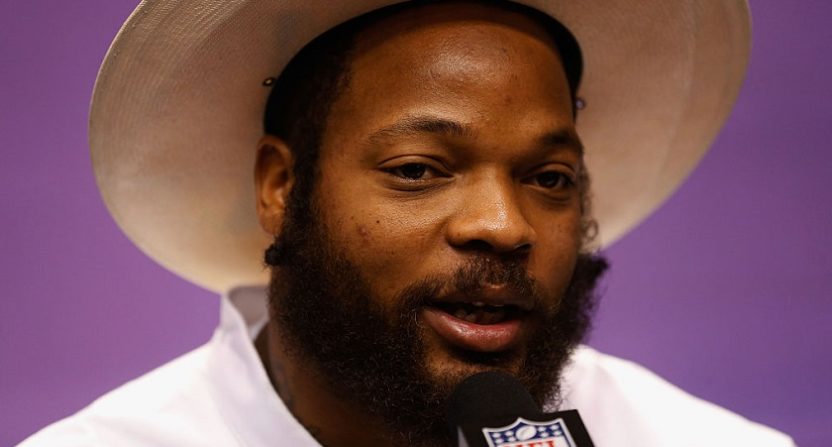 If you come at Seahawks defensive lineman Michael Bennett, you had better expect he’ll come right back.

Earlier this week ESPN’s Stephen A. Smith used the “Final Take” segment of his First Take show to criticize Bennett, who recently campaigned for Colin Kaepernick to join his team.

Smith bashed Kaepernick for declining to vote in the presidential election last November and tweaked Bennett for praising the quarterback’s activism anyway.

Smith said Bennett was “usually smart, incisive, conscientious and, most importantly, fearless,” then asked, “What in the hell has happened to you.”

Well on Thursday Bennett responded in a way commensurate with his reputation for being, as Smith put it, “smart, incisive, conscientious and, most importantly, fearless.” He wrote that he agreed with Smith about the importance of voting, then criticized the commentator for failing to back up his talk.

“It’s so easy to talk on television and not get your hands dirty and do the real work,” Bennett wrote in a tweet directed at Smith. “It’s so easy to divide people by playing on fears and lies instead of trying to highlight the hard work that athletes do in the community.”

Bennett went on to describe his own activism, which he says includes meeting with civil rights icons like Angela Davis and John Carlos, as well as volunteering in Haiti, at American juvenile detention centers and in under-served communities lacking access to nutritious food.

Bennett concluded by urging Smith to, “Please be a better person—other than someone who is all talk and no action.”

Smith countered that he had too much respect for Bennett to engage further, but he nonetheless defended his position.

Whatever you say @mosesbread72. Too much respect for you to get into anything with you. My position is simple: I take issue w/ any black

Person who doesn't exercise their right to vote, period. That's how I feel @mosesbread72 and I'm not changing. If that's weak-ass, so be it.

All the best to you and your brother @mosesbread72. Good luck this upcoming season.

This conversation certainly isn’t new, as many smart people have disagreed about the importance (or lack thereof) of voting in activism. And this is far from the first time someone has been called out for having strong opinions about activist methods while allegedly failing to do anything about the issues at hand.

Overall, whether you’re on Bennett’s side or Smith’s side, this was a more civil disagreement than about 95 percent of beefs between TV personalities and outspoken athletes.