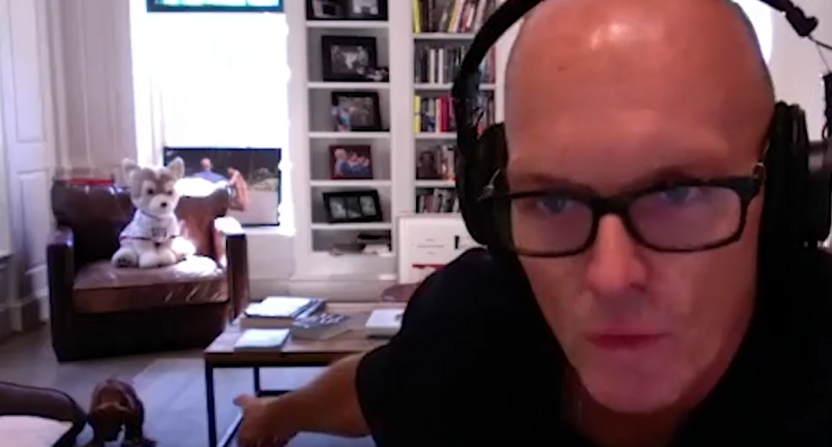 Scott Van Pelt announced on Twitter this week that his family has a new addition: Redd, seen in his introductory picture looking as adorable as a puppy can possibly look.

Goes by Redd. As in (Otis) Redding and Reading, Pa. where he’s from.

This picture got me. Big paws to fill. Whatever he is will be plenty. pic.twitter.com/FyhdiuCcGe

Van Pelt has notably discussed his love of dogs and how Redd’s predecessor, Otis, made a lasting impact on Scott and his family. Most memorably, perhaps, was this spring’s impossibly moving eulogy for Otis. It was beautiful writing, delivered through tears, stretching beyond just offering fond memories of a pet, touching on the nearly elemental relationship between humans and dogs and what it means to love when you know it isn’t permanent.

Today, Redd pooped in the house on camera.

Not just on camera, but while SVP was recording an episode of Slow News Day with The Ringer’s Kevin Clark.

Tomorrow, new SND guest @notthefakeSVP joins the show. He has a new puppy. His puppy did…this during the taping. This is one of the best moments in SND history.

So we made a trailer for tomorrow's episode.

It is, of course, objectively hilarious that Redd chose to do his business in just about the only spot in the entire room where he’d be visible to the camera. But what sends this moment to the heights of serendipitous providence is the fact that it happened at the perfect time to interrupt Clark’s attempt at a Ryen Russillo hair history dialogue. (Not that Clark’s bit isn’t great, too, to be clear. It’s just fantastic juxtaposition.)

Others rightly pointed to Van Pelt’s impeccable response, where he both noted the Russillo juxtaposition AND signaled for a twenty-second timeout in basketball fashion. A true professional!

I’m gonna take a 20 is the funniest thing i’ve ever heard in my life https://t.co/sfiA7eL7Aj

If Redd can make this sort of on-camera impact within the early stages of both his life and his time in the Van Pelt home, he’s going to be a star for a long time to come.

But, and it’s important to stress this even if it’s already been said: good dog, Redd.