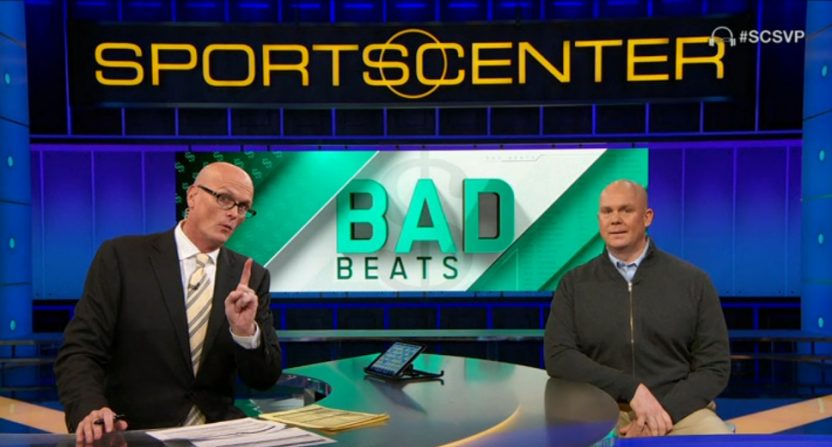 As we discussed earlier this week, the U.S. Supreme Court ruling striking down the existing federal law prohibiting most sports wagering seems likely to lead to sports networks doing more gambling coverage, possibly with both expanded gambling segments on existing programming and new shows focusing specifically on sports betting. Some of those currently exist, including Sports Illustrated TV’s The Line and the Vegas Sports and Information Network’s Sirius XM channel, but major sports networks don’t currently have much in the way of gambling-centered programming.

It seems that Scott Van Pelt, one of ESPN’s most gambling-savvy figures and one of the few figures at the Worldwide Leader who frequently covers gambling on air (with his “Bad Beats” segment on his SportsCenter With Scott Van Pelt show), thinks that’s likely to happen too. On the latest SI Media podcast, Van Pelt told Jimmy Traina he expects much more gambling coverage in the days ahead. Here’s the whole podcast, with the interview with Van Pelt coming near the start:

And some key quotes from Van Pelt from Traina’s write-up:

“I’d be stunned if you didn’t see us, Fox Sports 1, NBC Sports, CBS Sports, anybody that’s got hours to fill, I’d be shocked if they didn’t take a stab at it.”

…”The programming I think will happen organically in the sense that you’ll see it bleed into coverage now way less covertly and more overtly. Like, ‘Here it is, by the way, this is the number.’ I do think the NFL continues to be very hesitant for the time. They’re gonna let others be the ball carrier and as long as they’re hesitant to really embrace it, I think you’ll see networks respect their wishes as it relates to that and not be blatant.

“But the programming is definitely going to happen. Just because A) it’s legal and b) everyone’s got way more hours than they’ve got good content.”

It’s certainly true that there’s a lot of airtime to fill, especially when you consider secondary channels like ESPN2 and beyond. And gambling content is something that there’s definitely an audience for, and gambling-specific shows might bring in new fans who wouldn’t be watching whatever these networks would normally be airing. Van Pelt’s also right that this is likely to lead to less-covert mentions of the line or the over-under on other sports programming; there have been plenty of veiled references over the years, from Jimmy The Greek and Brent Musburger (who’s also on this podcast, by the way) through Al Michaels, but if sports betting becomes legalized in more states and more widely acceptable, it seems likely we’ll see more discussion of it on everything from game broadcasts to SportsCenter.

Van Pelt’s comments to Traina are also notable for his discussion of what kinds of gambling coverage networks shouldn’t pursue. He talks about selling picks, and says taking that approach would go over poorly with many:

And that’s something that’s important for networks to consider as they move in this direction. While the idea of gambling-focused shows on major sports networks is relatively new there’s already a lot of gambling-focused content out there, and a lot of people who are very vocal about what they want to see and don’t want to see. Van Pelt’s own show has taken a nice approach to this with the “Bad Beats” segment, which, as he mentions elsewhere in the interview, can actually be seen as promoting avoiding gambling because of the crazy things that can happen. “Bad Beats, to me, if anything, it’s saying, ‘Why would you ever bet because look how you lose.'”

It’s also interesting to hear Van Pelt talk about how the NFL continues to be “very hesitant,” and how “I think you’ll see networks respect their wishes as it relates to that.” “Bad Beats” itself doesn’t usually show NFL footage (although Van Pelt has referenced NFL outcomes at times), and while that might change if sports gambling becomes legalized in more states and more popularly accepted, it does seem likely that the NFL will push back against gambling-focused coverage more than other leagues, which may lead to less gambling-focused programming centering on that league.

And that’s perhaps unfortunate, as there’s probably more interest in wagering on the NFL than anything else. But it does seem likely that other leagues will embrace this more than the NFL, and that they’ll be more accepting of gambling-centric programming from rightsholders without heavy pushback. We’ll see how it all plays out in the end, but Van Pelt’s comments are certainly notable, considering how he’s been examining and talking about gambling for a long while. And his comments that gambling programming is likely to expand in the wake of this decision should be taken as a further sign that that’s coming.