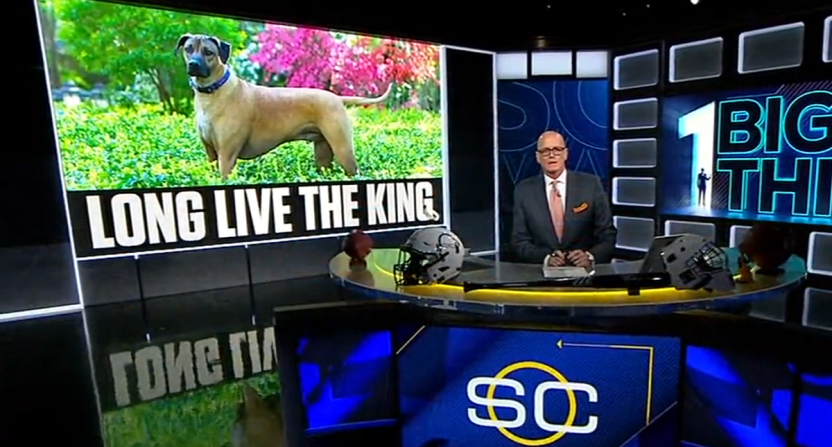 The NFL Draft is clearly sucking up just about all of the sports media oxygen right now, especially across the ESPN family of networks. After Round 1 coverage last night, though, Scott Van Pelt delivered one of the most moving segments of television you’ll ever see.

Turning his One Big Thing essay segment over entirely to something not sports-related in any way, Van Pelt offered a eulogy for his dog, Otis who’d become familiar to SVP’s viewers (and listeners, going back to his radio show days.)

Van Pelt has used this platform before to talk about things more serious than viewers would usually expect to find on SportsCenter, of course. From discussing his daughter to exploring the importance of empathy, he’s never afraid to step outside the usual box. It’s what makes him such an appealing broadcaster; in the same vein as David Letterman, when he gets serious, he does it with equal amounts of skill and purpose.

I’ve gone through this, so I can’t write with authority on whether or not this segment would be as touching for those who don’t know the exact mix of grief Van Pelt is describing here. Obviously an essay on the pain of love and loss transcends dogs, but it’s the specificity with which SVP explores what Otis meant to him that really makes this entire thing as powerful as it is. That’s not an easy thing to do; it’s impressive he didn’t completely lose it crying, but the idea of coming on the air in 2022 with something as emotionally vulnerable as this is brave enough as it is.

That Van Pelt took time to try and explore how a dog can become part of a family, in ways that were unique to Otis and Scott but that will feel familiar to just about anyone who’s ever been lucky enough to have a similar relationship, is incredible. That he succeeded, though, isn’t a surprise.

“Nothing we do could earn what our dogs give away to us for free.”