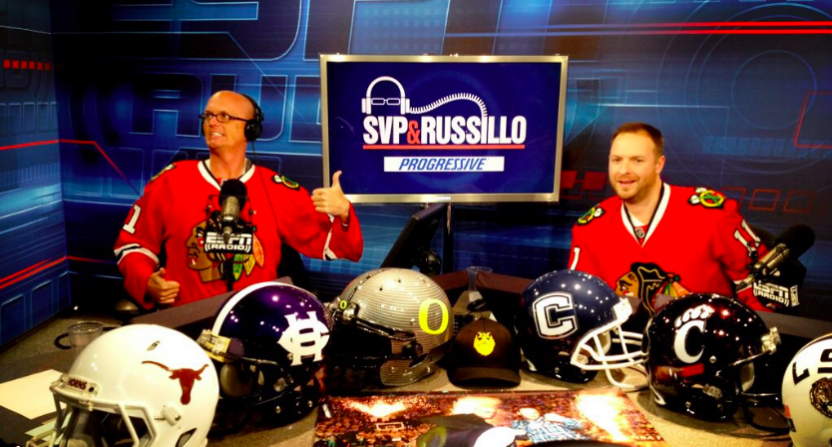 Like a pro wrestling tag team that briefly dominated before breaking up to find success as singles wrestlers, Scott Van Pelt and Ryen Russillo ran roughshod over the ESPN Radio scene between 2009 and 2015. Since then they’ve been busy doing their own things as duties changed and careers shifted. However, the itch to get the gang back together has remained true for both and it looks like that’s what going to happen, albeit in a slightly different form.

Originally known as The Scott Van Pelt Show, the syndicated radio program officially became SVP & Russillo in October 2012 after a few years sharing the studio as co-hosts. After a few years talking about the sports news of the day together, Van Pelt left in the middle of 2015 to become SportsCenter’s weeknight midnight anchor. From there on out the show became known as The Ryen Russillo Show, which it remained until the end of 2017 when Russillo stopped due to a contract dispute. However, he stuck around ESPN and shifted formats into a podcast, along with appearances across ESPN platforms along with a separate podcast and other work on The Ringer.

On Thursday’s episode of The Russillo Show, however, he announced up top that SVP & Russillo would be returning. But this time, befitting the technology of our time, it would not be a live radio show but instead a podcast.

New Russillo Show Pod @espn
-Breaking down the playoffs.
-I’m guilty of it but I don’t think we should re-rank the top NBA players after every game
-The Celtics are who I thought they were…AND the return of @notthefakeSVP and our new Pod announcementhttps://t.co/06Hb34U73Z

“We have a big announcement about a podcast that will be launching here at ESPN. it is called, and this may sound familiar, SVP & Russillo. Yes, we’re bringing back the radio show and we’re doing a podcast version of it. It will not be five days a week. It may not be five days a month. It’s probably even gonna be a lot less than that. But we will do a limited version of it because Scott and I want to do something like that. We miss working together and we’d like to get something a little bit more regular than just the sporadic time that we have him on this podcast.”

Russillo added that he would be headed back to Bristol for the first episode, though the details remained unclear otherwise.

Later on in the program, Van Pelt called in to discuss the impetus of this new/old project and what the expectations are.

“You and I were really lucky to do something that I think we both loved. And you and I have also been lucky to be able to do things separately that I think we both love and things worked out okay. But you and I have also ended up on the phone and have half-hour conversations and laugh and at the end of them say, well, that could be a podcast, so why don’t we just do this and we don’t we just give people what they want.

…I don’t know if people are gonna be psyched…that this is sort of back, or if they’re gonna be pissed because maybe they thought this meant we were gonna be doing three hours a day on their radio.”

Van Pelt alluded to the idea that the podcast will be monthly, at least at first, although the specifics were pretty light otherwise. Listeners of Russillo’s current shows and those who follow both hosts on social media will likely know when the new podcast feed has gone live and when to expect the first episode.