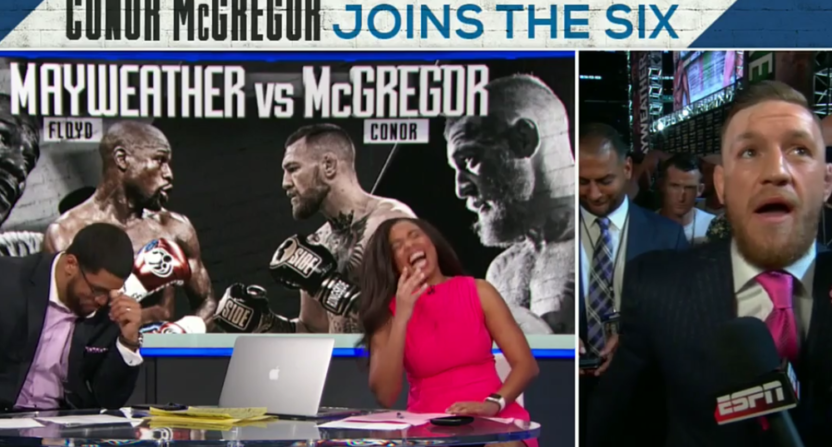 MMA fighter Conor McGregor has long been known for his entertaining and profane interviews, from making fun of Chad Mendes’ height and saying “I could rest my balls on your forehead” on BT Sport in October 2014 to making ESPN’s SportsCenter wish they’d used a seven-second delay in August 2016 (“Fuck everything!“) to delivering an incredibly profane joint press conference (which some fans paid $40 to scalpers to attend) with Floyd Mayweather Tuesday. It appears that ESPN has now realized that McGregor’s likely to be profane, as they had the bleep button (or, more specifically, the “audio drop” button) ready for his appearance on SC6 afterwards. And boy, did they need it.

Here are some of the highlights of McGregor cursing, and Michael Smith and Jemele Hill reacting to it. Let’s start with their first question, where Smith pulled out $100 (the price of the McGregor-Mayweather PPV), said McGregor’s earned that, and asked if his press conference goal was to get under Mayweather’s skin as well as sell the fight:

“I wasn’t really, I suppose, sure what to expect. The format is a lot different [than a UFC press conference]. They were very vague on the details, there were speeches and all that, I see guys get up, full speeches, I was like [bleeped], I couldn’t hear when they were speaking. There was some guy with gray hair and a big afro! [presumably Don King; Smith and Hill lose it at this point.] So I just went up and had fun and embraced it.”

McGregor then went on to insult Mayweather:

“His little head and my big fist, they don’t go together, so he will be done for,” McGregor says. Smith then says “He’s hard to hit, he’s one of the best defensive fighters in history; how are you going to land a punch?” McGregor reponds “I don’t care! I don’t [bleeping] care!”

Later on, McGregor dropped a “I don’t [bleeping] care what people think!” while relaying what Mayweather said to him about “Next we’ll do a MMA fight,” and then went on to drop a bunch of further words that got bleeped:

He did manage to get one profane expression to air, with ESPN apparently choosing to never mind the bollocks:

And McGregor also talked about how excited he is that everyone’s on record saying he has no chance. Perhaps we can get him to write for Freezing Cold Takes?

In any case, it made for a very entertaining SC6 interview, and one where the bleep button got a workout. This was far from the norm, though, as evidenced by Hill’s “Now, the PG portion of the program” at the end of their Mayweather-McGregor segment:

The whole Mayweather-McGregor press conference was entertaining and profane (unbleeped on ESPN3!) as well, as seen in these highlights:

And even McGregor’s suit was profane, so it’s a good thing the cameras didn’t zoom in too far:

This guy McGregor. Literally has "f–k you" as pinstripes. Unreal. #MayGregor https://t.co/qfShTtzFHL

But this still doesn’t hold a candle to perhaps McGregor’s best moment, the March 2016 joint interview with Nate Diaz on Fox Sports Live (rest in peace) that devolved into profane discussion of gazelles:

Yep, McGregor can be hilarious, and he might be one of the best athlete interviews out there. Just have that bleep button ready, or else you’ll wind up like NBC.