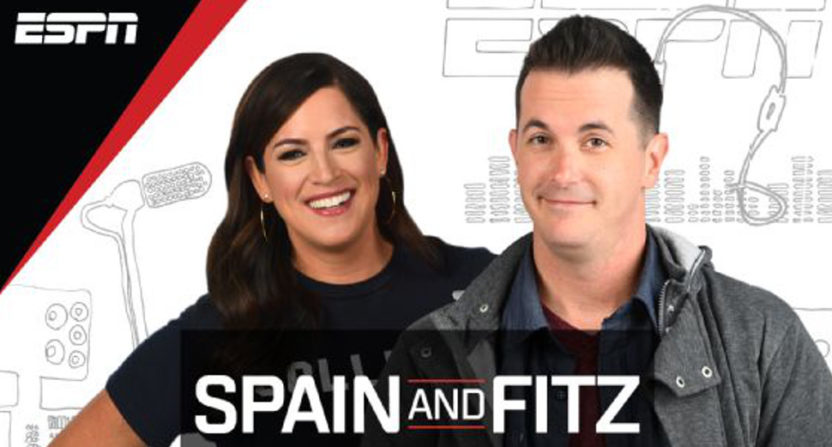 Tuesday saw an unusual Twitter exchange between two sports-radio personalities revolving around an interview one of those personalities did with another radio figure — about, of all things, post-Super Bowl celebrating.

This all started with ESPN Radio’s Spain and Fitz Monday night, where Sarah Spain and Jason Fitz brought on Philadelphia radio host Mike Missanelli (of 97.5 The Fanatic, a Fox Sports Radio affiliate, and previously seen on this website last fall when he lost a TV job for saying, “I don’t know why the sporting world needs a female play-by-play person on an NFL game” about Beth Mowins, plus in 2016 around a fake racist caller to his show and in 2014 when he celebrated Victor Cruz’s knee injury) to talk about the Eagles’ win in Sunday’s Super Bowl. Spain started by asking Missanelli about where he was watching and what his nerves were like, and Fitz then asked about Eagles’ quarterback Nick Foles’ performance and Doug Pederson’s coaching. Spain asked about vandalism around the celebrations in the city, and Missanelli objected to that “narrative that comes with Philadelphia.”

Spain then said Missanelli was biased, Missanelli brought up further examples of riots and celebrations in other cities, and Fitz then got things back to football by asking about Pederson’s fourth down gambles. Missanelli replayed his exchange with Spain on his own show Tuesday, though, prompting someone else to tag Spain in footage of riots elsewhere and Spain trying to justify her own comments. That led to Natalie Egenholf, who works on Missanelli’s show as an update anchor (in addition to hosting Saturday Sports Social on Philadelphia’s 610 AM, an ESPN Radio affiliate) jumping in for a further back-and-forth. Missanelli then weighed in himself. First, here’s the clip of Missanelli on Spain and Fitz (the full hour can be found on ESPN Audio here; this is the Missanelli interview, with the controversial question coming around the 2:45 mark ):

Spain says, “So we saw a lot of dispatches from the city of Philly last night. Deadspin collected a variety of photos, videos, GIFs, of the city, celebrating I guess is what you would call that? What do you make, was it better or worse than you expected of the Philly faithful in pulling down the lightposts, eating horse poop?”

Missanelli laughs and responds, “You know what’s really funny, this narrative that comes with Philadelphia. It’s consistent, and I think it’s silly, to be honest with you. Every city that wins or cities that lose act up just as bad. They rioted in Boston for losing, the Amherst campus rioted. I thought it was fairly civil, what happened last night. Is that the first light post that’s ever been pulled down? There are going to be drunken fools that are going to act up and do everything, but this Philadelphia narrative that everybody is in the third gates of hell is just…”

Spain cuts him off with a “You are biased, though, you realize that, you’re biased, not every city does things like that.” Missanelli responds “I’m the last biased guy. I attack fans who do things like that, but you can’t eliminate drunken idiots, especially at the game. The kid who punched a horse made the city look bad. Last night, somebody climbed a light post. We had a light post, we had an awning pulled down. In Montreal, they were setting cars on fire when they lost the Stanley Cup Finals. I just don’t understand why Philadelphia is the bastion for bad behavior when it’s just not the case, when you can go all over to any city that celebrates and find these kinds of incidents.”

Here’s how this then played out on Twitter Tuesday.

I picked the Eagles, was rooting for the Eagles, sister is a diehard Eagles fan. I've got no anti-Philly sentiment at all, merely asked about the postgame scene. You gotta relax.

I’ll relax if you agree to stop peddling the lazy national narrative about us. Deal?

I'm going to keep talking about what I see, wherever it is. And, as always, whenever I talk about ANYWHERE, I'll say "there are morons rooting for every team" because that's the truth.

So, an underdog team with a backup QB, beat the champs who were SB favorite, left a key player on the bench, and Sarah asked about a light pole and horse poop from drunks. Sport / Jouranlistic credibility?

Based on what I'm hearing, doesn't sound like I'd wanna come on his show. Sounds like he threw me under the bus. Not deserved. Not cool.

He didn’t throw you under the bus, we replayed the interview. We’re just tired of the narrative. It was the 2nd question asked after the Eagles won the Super Bowl. It’s old and needs to be let go. https://t.co/Vhk2KC8l6F

If you disagree with how the post-game celebrations were characterized, that's fine. I was neither disrespectful to him or Philly, and yet my timeline is full of folks saying he "slammed me" and "took me to the wood shed." Sounds like it was a nice conversation. https://t.co/ZJlralZCSY

We had him on our show to get his voice on his city winning – the game, the celebrations, everything. If he didn't like my question, so be it, but there was no malice. To turn that into this? B.S.

I don't do "media fights" and I don't do undeserved disrespect. https://t.co/ZJlralZCSY

It is disrespectful to characterize our city based on four incidents, that’s the point. That’s what’s aggravating. https://t.co/yjchj0Ymh5

Picked the Eagles, rooted for the Eagles, sister spent years living in Philly & is a diehard Eagles fan. I've written stories about violence in other cities being a terrible way to "celebrate". This was not me attacking Philly, this was me asking about images/videos of post-game. https://t.co/iPipf38iA4

Chicago gets a lot of unfair stereotypes, too, so I understand being defensive. Fight back all you want, spread word of the great fans & civil celebrations & awesome things the win brings to the city. Attacking me for a question just seems really unfair. https://t.co/iPipf38iA4

He didn’t attack you, he defended the city. This is mall we get asked about. He reacted the same way with Cowherd a few weeks ago. https://t.co/6hcRcL3grY

It was one question during the interview. I wanted the perspective of a Philly local. "Slamming me" or "taking me to the wood shed" (as your listeners described it), because you're angry about others asking about it, too, is B.S. https://t.co/ftjol6YFpw

We welcome you to come on to discuss this. https://t.co/6hcRcL3grY

I don't know you or Mike, but pulling this b.s. is not how I operate in this business, so no thanks. Enjoy your big week of celebrations. Didn't intend to sour it with a question. https://t.co/4dMPQpXkhC

Hey Sarah, sorry that you felt I “threw you under the bus.” Not my intention at all. Just pointed out that the “bad behavior” of the Philly fans was the second question of your interview with me which to me showed the you were predisposed to deride an entire fan base. https://t.co/OEpziyxXOG

That predisposition in my opinion is a completely distorted, overblown and frankly lazy national narrative, not fair to the majority that are great fans. https://t.co/OEpziyxXOG

That’s quite the heated exchange over this, but both sides’ points are somewhat understandable. On Spain’s side, she didn’t immediately ask Missanelli about this, and while it was her second question of the interview, it was almost three minutes in, after they’d already discussed Missanelli’s own reaction to the game and his thoughts on Pederson and Foles. And asking about the celebrations in the city is a reasonable topic, especially for an interview taking place almost 24 hours after the game; there’s only so much discussion of the game itself you can do, and the celebrations received a lot of buzz.

However, it’s also completely understandable why Missanelli is tired of people picking on Philadelphia for celebrations, something he undoubtedly hears regularly, and that speaks to some of the challenges of celebration coverage. And Spain’s particular question to him was perhaps a bit inflammatory, as was her cutting him off with, “You’re biased!” (That in itself is probably a fair point to bring up, but the way it was brought up wasn’t necessarily great.) Moreover, Missanelli handled this pretty well during the Spain interview, disputing her premise but doing so in a way that wasn’t especially rude or confrontational. The real eventual MVP here was Fitz for moving the conversation into safer waters rather than doubling down on that argument, though.

As per the Twitter debate, it’s again possible to see where both sides are coming from. Missanelli is well within his rights to replay the interview he gave to Spain and cite it as an example of the national media focus on the negatives in the Philly celebrations. We don’t know what he surrounded that segment with, though, and maybe there were some inflammatory comments there or a push to go yell at Spain. As for Spain, it’s understandable why she isn’t thrilled to have Philly fans yelling at her and why she’s upset that she was targeted for asking Missanelli a question, and she’s well within her rights to not appear on Missanelli’s show. This definitely made for a strange media controversy, though.