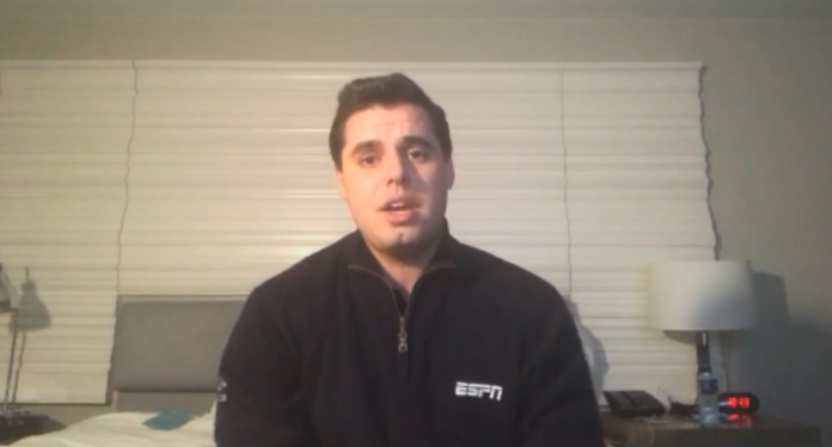 There’s another Ravech in the ESPN fold. Karl Ravech has worked for ESPN since 1993 in roles such as Baseball Tonight host, MLB play-by-play voice and SportsCenter anchor, and now his son Sam is also joining the network as a college sports play-by-play broadcaster. Sam Ravech posted that news on Twitter Friday:

Officially signed my contract with ESPN. Thank you to all who have helped me get here. I am both honored and grateful for the opportunity and excited for the future. pic.twitter.com/acQsAx80sB

Those notes say he’ll be doing play-by-play for college sports including baseball, basketball, and volleyball, and they also include some thoughts on what this means to him: “To say this has been a dream of mine for a long time is putting it lightly. For as long as I can remember, this has been all I thought about before I went to bed and when I woke up. To see it come true is a blessing.”

Sam Ravech started his broadcasting career at Pepperdine, but also appeared on some ESPN regional Little League broadcasts (with his father and John Kruk) leading up to the Little League World Series during that time  He’s been calling games for the San Francisco Giants’ AA affiliate, the Richmond Flying Squirrels, for the past two seasons, and he made his ESPN3 debut at age 22 last year by calling a Miami-Tulane basketball game, in the same week his father was calling games from the Battle 4 Atlantis. That led to this ESPN PR video of  “A Very Ravech Thanksgiving,” with the two of them talking trash back and forth:

Ravech said his father was supportive, but not pushy, about career options.

“I want to follow his footsteps, but I want to make my own footprint,” said Ravech. “He’s provided me with some great advice.”

During the 2004 World Series won by Boston, Ravech was 9, but joined his father for a postgame show at Fenway Park, in a way.

“It’s those kind of memories that I cherish.”

We’ll see how the younger Ravech does with more ESPN assignments.