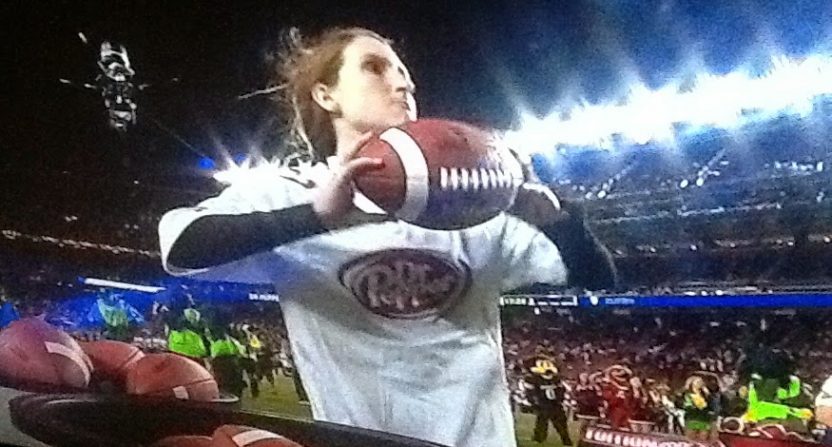 For these with less interest in college football (or arguably more robust social lives) than others, Dr. Pepper holds a handful of halftime entertainment contests at all five of the Power 5 conference championship games. Participating in the contests are two students trying to win a cool $100,000 in college tuition. This is what it looks like.

As you may have noticed, both participants are chest passing a football, an activity that does not exist organically in the recreational world, but is shown to millions annually, drawing substantial social media attention for all the wrong reasons. We’ve covered the absurdity of this a few times, as has basically any sports website that doesn’t suck (and some that do suck).

The internet dunks on Dr. Pepper each year for allowing chest passes, and they don’t seem too care much, which is fine. But that’s not to say they aren’t sensitive about the contest, and ESPN and former college football sideline reporter Sam Ponder learned that the hard way.

Two years ago, Ponder (who had yet to promoted to her NFL studio role) was slated to emcee the ACC Championship Dr. Pepper contest. Before that, she fired off this (now deleted) tweet during the Pac-12 Championship halftime contest. 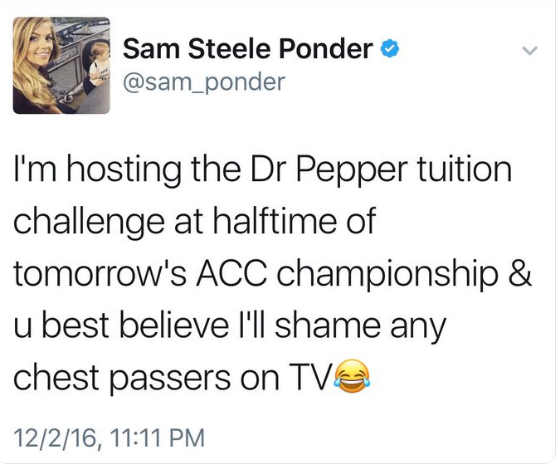 Oh hell yes! Chest passing was finally going to get its day of reckoning.

@sam_ponder
Another Dr. Pepper halftime show, another chest pass exhibit. It's up to you Sam to call these people out. #Throw the football.

The chest passes in the Dr. Pepper tuition challenge are embarrassing. @sam_ponder I know you'll make these jokers actually throw the ball.

But fast forward to halftime, and Ponder was nowhere to be found during the contest despite being the sideline reporter for the game. Instead, Doug Kezirian hosted the contest.

While it’s not hard to connect the dots here of what happened, the story is one that ESPN employees enjoy retelling to this day. Ponder actually commented about deleting the tweet and not hosting the event to our own Ken Fang, but we’re told this isn’t exactly how it went down.

I was asked to delete it by DP, so I politely declined to host the segment. All good.

While Ponder says here it was her decision, multiple current and former ESPN employees tell a different story, although some of the details are in question, depending on who you talk to.

Almost everyone agrees Ponder did not “politely decline” to host, and Dr. Pepper actually reached out to ESPN and was “absolutely furious about the tweet”. Two sources shared that this was done “at a very high level,” and that they demanded she be taken off the contest Another well placed source said “well, it’s semantics, but in reality, she wasn’t going to do the contest. No way in hell.”

Some sources recalled that Kezirian had been woken in the middle of the night and “flown in a rush to do the contest,” but other sources would explain Kezirian was actually in the area for his radio hosting job.

There is also some ambiguity on the repercussions this had for other ESPN talent. All people I spoke to about this incident (almost all of which got a good kick out of chatting about this topic) remember being firmly reminded not to disparage ESPN sponsors. One cited a Lee Fitting email (although nobody could ever track down this email), while others recalled their producers giving them a stern reminder to not join in on mocking sponsors and specifically, the chest passes. One source said, “it came up in a preproduction meeting and we were told just to not talk about it at all and that Dr. Pepper is really sensitive about the chest passing, which only makes it more funny.”

While most ESPN folks find the whole situation hilariously stupid, a few people I spoke to about this believe Ponder did overstep and that the reaction from Dr. Pepper and ESPN should have been expected.

Either way, fans were disappointed that the chest passing never got it’s reckoning from Ponder.

Waited all day to see @sam_ponder make people throw it like a real football at the ACC Toss for Tuition, and then she no-shows… #notcool

@sam_ponder Guess you didn't get to do the Dr. Pepper challenge because you said you would publicly shame the contestants?

@sam_ponder where r u????? was looking forward to you shaming these guys all day!!!!!

Dr. Pepper nor ESPN wanted to comment on this hard hitting, potential Pulitzer story. This was honestly the first time I’ve ever groveled with a PR person, as I implored someone at Dr. Pepper to issue an official comment on chest passes. I never got a call back. Cowards!

The halftime contest didn’t always used to be like this. In my article a few years back, I documented how the contest has changed over the years, with contestants moving closer to the targets and other rules being adjusted as well (no longer a limit on throws). That’s a long ways of saying that Dr. Pepper changed the rules over time to seemingly enable chest passing.

I have theories on this I can expound on (more or less, they wanted to make this less of an athletic competition so anyone can win). Whatever the case, Dr. Pepper seems to not care that the contest is universally mocked on social media, just as long as that mocking does not extend to their sponsorship partners in ESPN and Fox. Perhaps this is just another sign that we should do away with conference championship games and replace them with an 8 game playoff.