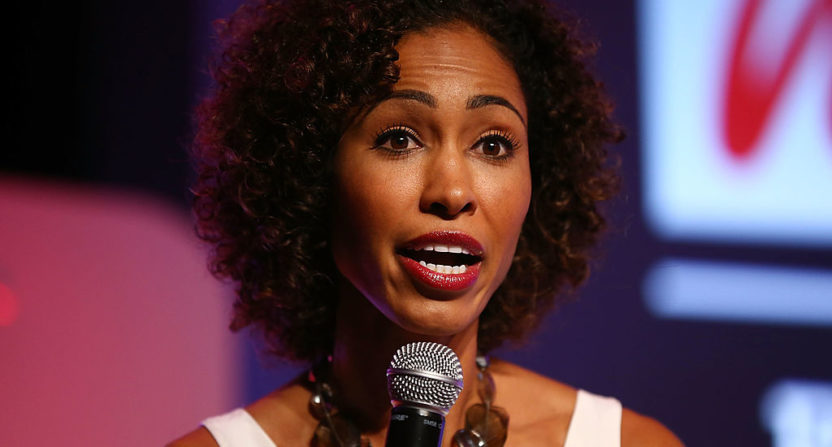 ESPN’s Sage Steele has been all over the map in the past year. She tweeted at Tampa Bay Bucs wide receiver Mike Evans about his national anthem protest, then was criticized for it. Steele also was criticized for an Instagram post on the travel ban protests at Los Angeles International Airport. And ESPN had Michelle Beadle take over as full-time host of NBA Countdown back in April after she and Steele split the duties at the beginning of the season.

Through it all, ESPN President John Skipper expressed his support for Steele. Later this month, she’ll be the host of SportsCenter AM from Monday through Thursday.

In a new interview with USA Today, Steele said she’s learned something new about herself through these controversies:

“…I’m a lot tougher than I thought. It’s actually strengthened me and encouraged me to continue to be me and never let anyone dictate that for me. There are some sickos out there who must be very, very bored, but I’ve learned that I can handle it. If you want to hate me because I talked about my experiences, things I wish hadn’t happened, then that’s on you.”

She said she’s heard from people who have supported her and praised her for being honest, “And so I know that when you’re being honest and it’s about my experience, no one can tell me I’m wrong, because it happened. If I allowed those people to tear me down or affect my job, that’s on me. I won’t let anyone take this passion away from me.”

In regards to her posts on Mike Evans and the airport protest, she said she could only speak from experience:

“I had been out at Arlington national cemetery when Mike Evans said what he said and did what he did. My grandfather is buried there. I have a different perspective than most. As I said, all for your rights, but I think there are other ways. That was my experience, my experience at LAX was different than how people portrayed it, but that’s because they want to find something and so again, my goal isn’t to start stuff, these are my experiences and that’s okay if people don’t like it or agree with it. If we’re all preaching diversity and acceptance, it’s not just skin color and gender, it’s about diversity of thought, and I think that’s pretty important.”

As far as talking politics, Steele said she has never broached the subject saying it’s a private matter. “I’m pretty sure people aren’t watching me on SportsCenter because of my political standings whether they agree or not. I’m a sportscaster and I’m not comfortable doing it, it’s not what I’m about.”

So as Steele prepares to take over the hosting duties for SportsCenter AM on August 28, she’ll be ready to talk sports and bring highlights of NFL games during the season. As for politics, she’ll leave that to others.