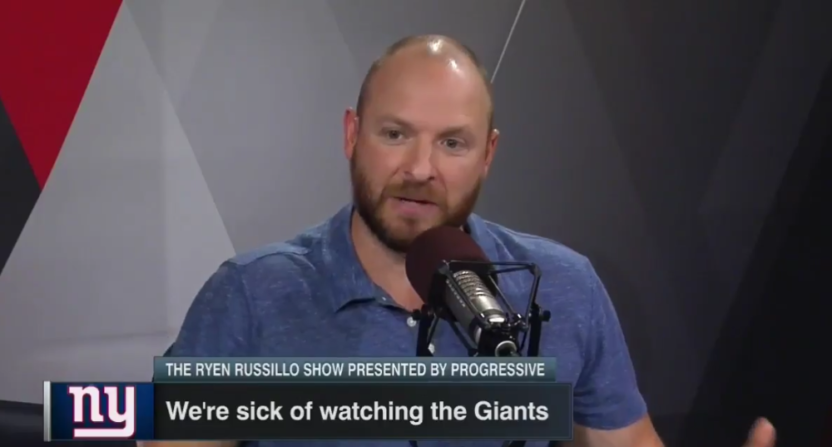 Deciding which NFL games should be placed in primetime is a complicated dance, with factors like the team’s recent record, their fanbase, their market size and their local ratings all taken into consideration. But that sometimes means certain teams are given plenty of national dates regardless of if they’re any good, and it sometimes leads to bad or uninteresting games as a result. ESPN radio host Ryen Russillo has had it with one particular team that keeps being shown in primetime; the New York Giants. Here’s his rant from Tuesday’s show:

Raise your had if you're with @ryenarussillo and are sick of watching the Giants in primetime ✋ pic.twitter.com/RbqxSjJKXM

“I’m so sick of the New York Giants. I can’t stand watching you. I hate it. It is very personal. It has nothing to do with rooting interests. …What I care about, selfishly, and no one’s going to cry for me here because it’s a good job, when you’re a decade in and every weekend is 20-plus hours of watching football, from noon until 1 a.m. or so Saturday, and then that Sunday nighter rolls around again, or a prime-timer, and I’m just kind of a little sick of football at that point, and it’s the Giants again, who haven’t broken 20 points since Week Five of last year, and they have five marquee games? Their bye week is a Thursday game this year!”

“I’m so sick of watching the average-as-hell New York Giants a third of every prime time game. I just can’t do it any more. I have no rooting interest, I don’t dislike any of the guys, I’m just sick of watching your team. And the goon squad that’s there for the home games that’s almost as excited to boo as maybe to even see a win. I’m sorry to go Carcetti on you here, I just can’t do it any more.”

That’s quite the take from Russillo, but he’s not exactly wrong. (Well, he’s wrong that the Giants haven’t broken 20 points since Week 5 of the 2016-17 season; it was actually Week 12, last November.) But he’s right that the current Giants don’t look like a good team; they’re 0-2 so far this season, with both games aired in prime time (a 19-3 opening week loss to Dallas on Sunday Night Football and a 24-10 loss to Detroit last night on Monday Night Football). And he’s right that they’re currently not a lot of fun to watch.

The challenge there is that the Giants push a lot of scheduling buttons, though; they play in the country’s largest media market, they averaged 19.7 million viewers in prime time games last year (sixth in the NFL), and they play in a NFC East division that has three other top-drawing franchises (the Cowboys, Redskins and Eagles were first, seventh and 12th in those prime time ratings last year). In fact, the NFC as a whole draws better than the AFC in prime time games, with the six lowest markets all being AFC ones, so that’s another reason why the Giants might get more prime time play; their average opponent is more likely to be somewhat of a national draw than an AFC team’s average opponent. And the first two games this year probably weren’t all about the Giants, as the Cowboys and Lions were first and second in those national rankings last year.

And even from an on-field perspective, many may not have expected the Giants to be this bad. Despite those low offensive numbers last year, they were 11-5 on the season and made a playoff appearance, their first since they won the Super Bowl in the 2011-12 season. So some might have counted on them being at least respectable. It doesn’t help that star receiver Odell Beckham Jr. missed Week 1 and was limited Monday, but this team is still underachieving compared to what they did last year.

Maybe that’s a reason to put more forward projection of what a team will be like in the coming season into scheduling considerations, or maybe it should lead to a push to increase focus on team quality rather than their prime time ratings and market size. But broadcasters’ ultimate goal is maximizing the ratings, and sometimes, even showing bad teams with a big following can bring in better ratings than choosing good ones without a giant following. (For example, the Cowboys didn’t disappear from national TV during their playoff drought from 2010 to 2013, or in their 4-12 season in 2015, or in the season following that last year.) And this isn’t limited to football; it’s why we keep seeing Yankees-Red Sox and Flyers-Bruins.

The scheduling also speaks to the different types of fans and media who watch the NFL. Some, like Russillo, may watch every prime time game, and just want to see good football, but others are only concerned with either their local team or a marquee team. So broadcasting high-profile teams like the Giants and Cowboys can be attractive even when they’re not the best teams out there. Russillo may well be right that repeated prime time broadcasts of the Giants aren’t fun for those who just want to see good games, but that doesn’t mean they’re necessarily the wrong choice for broadcasters. At least he’ll only have to suffer through two more prime time Giants games (Weeks 6 and 12, both on NBC) this year, though.