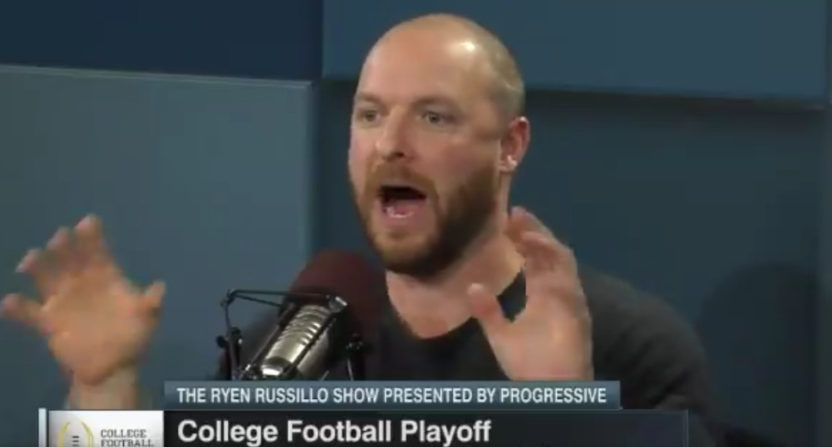 Unsurprisingly, the College Football Playoff committee’s decision to put Alabama in the fourth spot over Ohio State has sparked plenty of discussion, with some praising it and some bashing it. ESPN’s Ryen Russillo addressed that decision on Russillo and Cain Monday, but took an unusual tack in doing so, making the case that the decision was right and listeners should trust him because he didn’t go to a football school (he went to the University of Vermont, and the Catamounts haven’t had a football team since 1974), while citing ESPN coworkers’ playing pasts and going after outside critics like ex-partner Danny Kanell (now with CBS) for anti-SEC bias and Fox’s Joel Klatt for Klatt’s playing career at Colorado and past comments about ESPN:

Ryen's message to ALL college football analysts out there: YOU DON'T KNOW WHAT YOU'RE TALKING ABOUT! pic.twitter.com/nnL9R4NeuO

“I’m coming to you as the guy who is not biased. I went to Vermont, okay? Vermont. We don’t have football. I’m from New England, okay? I’ve rooted for Texas because of Colt McCoy, I’ve rooted for Oregon because of Chip and Helfrich, and yes, I have fun at LSU. That’s it!”

“When I listen to other people talk who have a background with teams, whether it’s Joey [Galloway] with the Buckeyes, Des[mond Howard] with the Wolverines, I think there are times where Booger [McFarland] actually trashes LSU to make it seem like he’s not being pro-SEC, I sat next to Danny who I think is maybe the most biased, because he’s so anti-SEC, the most biased voice in college football, who is just going to call the committee liars because he didn’t get what he wanted. He wanted to make fun of Bama and troll them on Twitter all night long. And then he calls them liars! Joel Klatt, who I love, on the [Big Ten Championship] broadcast, I thought he was going to start doing a ‘Bama Sucks’ chant with Urban Meyer as they presented him the trophy.”

“Here’s the deal. I understand the schedule, I understand the disappointment in Alabama’s schedule, but [Ohio State’s] Iowa loss is tough to get by. And if everyone on that committee said ‘The Iowa loss is too much, I don’t know how you argue with them there.’ All I’m telling you is listen to me more often, because I’m the one that’s telling you the truth when everybody else has some weird anti-deal, whether it’s a Fox guy that played in the Pac-12, hates us, hates ESPN, called us co-conspirators two years ago with the entire committee…I’m the one not lying to you!”

“This outcome on Sunday, Will, this outcome was good for the anti-conspiracy people. The conspiracy was putting Ohio State in politically to get a better brand in, perhaps ratings-wise, to balance it out more geographically, to not say that [Big Ten commissioner] Jim Delany’s in charge of this whole thing because he’s a commissioner with more juice. This is the outcome you should be rooting for. What you got yesterday was bravery, that’s something you should be thrilled, that the committee’s not going to go ‘Let’s not leave out a powerful conference.’ They left out the team that had two losses and they kept in the team they thought was better. It’s really simple. It’s not that hard.”

There’s a whole lot going on in that heated rant, but let’s first address one factual inaccuracy; Klatt did not play in the Pac-12. He played for Colorado from 2002-05, while the Buffaloes were in the Big 12. And sure, you could argue that he might favor Colorado’s current conference, but the Pac-12 wasn’t even really involved in this debate between Ohio State and Alabama, as conference champion USC finished eighth in the CFP committee rankings.

Russillo is somewhat right about Klatt’s advocacy for a conspiracy theory, though; Klatt espoused that on The Herd in 2015, and argued that Big Ten and SEC teams were ranked higher than they should be and that the committee was “100 per cent anti-Big 12.”

"I think the (CFP) committee is basically cooking the books like Enron" – @joelklatt brings it. #TheHerdhttps://t.co/WgouVvjoIE

That last one includes him saying “I don’t think we get a great interpretation when the one television partner is the one that’s talking about it.” So Klatt has certainly made some comments about ESPN and the rankings over the years, and ones bashing the committee’s treatment of Big 12 teams, but it’s not clear how that ties into his opinion on Alabama (SEC) versus Ohio State (Big Ten). Klatt’s opinion there is odd enough in its own right, though:

"Everything in the first 3 years was a lie… Dishonest. Inaccurate. Unreliable." – @joelklatt on the CFP Committee pic.twitter.com/5vqpvyAJHN

Beyond that, it’s also not clear that Ohio State over Alabama would be a victory for any ESPN conspiracy to boost playoff ratings. The Alabama – Auburn Iron Bowl outdrew the Ohio State – Michigan game by several million viewers this year, and Alabama has often been very good for ratings. Yes, Ohio State would bring in another conference and a different geographical area, but that’s not necessarily a clear ratings win when the other option is Alabama’s ratings juggernaut. And Ohio State over Alabama wouldn’t benefit a long-term ESPN conspiracy; Fox now has the better half of the Big Ten rights, while ESPN is heavily invested in the SEC, including with the SEC Network. Russillo’s right that there probably isn’t much of a conspiracy argument to be made this time around, but it’s not like a choice of Alabama over Ohio State is terrible for ESPN’s interests.

Russillo’s certainly right that ex-partner Kanell loves to troll the SEC, and that’s been obvious for a long time. And maybe he’s right that his ESPN colleagues are sometimes affected by where they went to school; it’s certainly valuable for viewers to know each analyst’s background, and to decide if that’s impacting their comments. But the whole act of “I’m the one not lying to you!” feels a bit much; sure, it’s radio/TV, and it’s arguing for effect, but this still feels like going a bit far. Russillo has his thoughts on what the committee should and shouldn’t do, and that’s fine, but that doesn’t mean everyone who disagrees is blinded by bias. No matter how vehemently Russillo argues it.