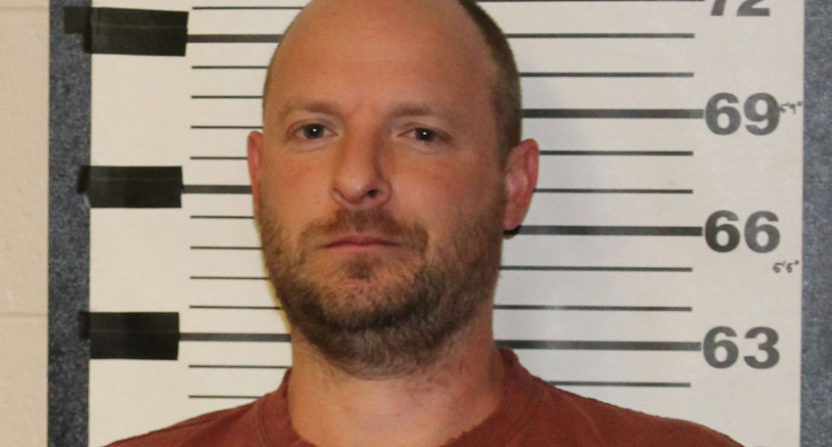 ESPN’s Ryen Russillo was arrested in Wyoming on a charge of criminal entry Wednesday morning, as per the Teton County Sheriff’s Office (based in Jackson Hole, WY). Jackson Hole News and Guide sports editor Clark Forster was the first to note this, and it’s since been picked up by The Lead, Deadspin and TMZ. The News and Guide has more details in this story:

Officers were called around 3:30 a.m. to a condo in the 500 block of Snow King Loop for a report of a “highly intoxicated male who was refusing to leave.”

Two people were asleep in the condo when they heard someone come in. They didn’t know the man and asked him to leave because he was drunk, according to reports. Police arrived a few minutes later.

“Occupants pointed the suspect out who was found in a bedroom,” Jackson Police Lt. Roger Schultz said.

Russillo didn’t know where he was and thought maybe he was staying in the condo, police said.

Update: And, it turns out, he was naked except for his pants around his ankles:

@ryenarussillo story UPDATED: Officers found Russillo "lying on the bed in the south bedroom naked except for his pants around his ankles.” pic.twitter.com/7HVEDmLc1m

That News and Guide piece goes on to point out that the occupants asked Russillo to leave, but Schultz said “He was too intoxicated to follow through with the request.” Deadspin’s Samer Kalaf has more on what a charge of criminal entry means in Wyoming:

In the state of Wyoming, criminal entry is a misdemeanor similar to trespassing:

(a) A person is guilty of criminal entry if, without authority, he knowingly enters a building, occupied structure, vehicle or cargo portion of a truck or trailer, or a separately secured or occupied portion of those enclosures.

…(c) Criminal entry is a misdemeanor punishable by imprisonment for not more than six (6) months, a fine of not more than seven hundred fifty dollars ($750.00), or both.

ESPN and Russillo haven’t yet commented on this. Russillo has been with ESPN Radio since 2006, first working as a host across multiple sports and properties. In 2009, he started co-hosting a daily afternoon radio show with Scott Van Pelt, then with Danny Kanell, and then by himself since Kanell was laid off in April. There were initially rumors that Russillo would be cut or taking a reduced role too, so much so that he started looking for houses in Los Angeles, but those proved not to be the case.

Russillo has been on vacation recently, with Will Cain filling in on The Russillo Show (which is simulcast on ESPNews) this week. He recently tweeted from Montana and sent an August 16 tweet about how he was going to be in Jackson Hole around Monday’s eclipse (which drew plenty of visitors to town), but not for it:

I might start telling people I'm going to Jackson Hole FOR the eclipse. Makes me seem more into it. (Instead of really poor planning)

His most recent tweets are about the Cavs/Celtics trade Tuesday night:

5/ LeBron doesn't know what he's doing now. (Sourced info) So none of us do.

6/ Also, the anti-Ainge crew needs to look in the mirror. He got Horford, Hayward and Kryie in less than two seasons. That's absurd.

Hate this take. So do what, nothing? Don't try and get better? IF LeBron leaves they own the East. https://t.co/uqZnYS4MPy

We’ll update this story with more details as they become available.