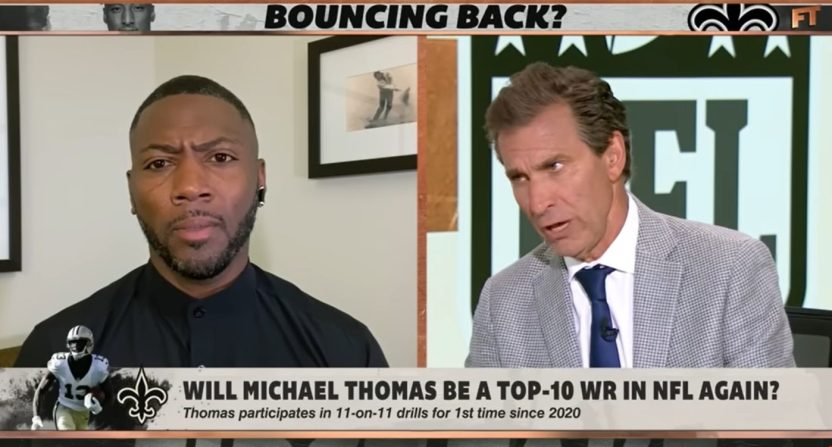 For decades, legendary sports radio host Chris Russo has lived up to his nickname “Mad Dog” for his tendency to – you guessed it – get mad.

Monday morning, Russo worked alongside former Pittsburgh Steeler and current ESPN NFL analyst Ryan Clark on First Take. Clark knew Russo’s nickname, he referred to the radio Hall-of-Famer as “Mad Dog” throughout the show, but he loathed seeing it in action.

During a segment about New Orleans Saints wide receiver Michael Thomas, the conversation swayed to Super Bowl LVI MVP Cooper Kupp, with Russo stating he’s already done enough in his career with the Los Angeles Rams to be a Hall-of-Famer, a ridiculous claim that garnered pushback from Clark.

“They must be voting like you vote for the Heisman where you just vote on whoever the hell you want, based on the fact that they play quarterback,” Clark told Russo, referring to anyone who would be willing to vote Kupp into the Hall-of-Fame at this point in his career.

“Ryan, hold on now,” Russo said as he raised his voice, seemingly agitated by Clark questioning his Heisman Trophy voting credentials. “You said something, now I’m going to comment. I’ve been voting for the Heisman since before you were born.”

Clark explained that he doesn’t care how long Russo has been voting for the Heisman and added that he never directly said the veteran sports radio host doesn’t deserve a vote for the award.

What was clear, is the fact that Clark didn’t care for Russo’s tone during the segment. The problem, however, is that this is the tone that made Russo into a sports media star. And this is the tone that caused Stephen A. Smith to recruit Mad Dog to First Take as a contributor earlier this year.

Clark went on First Take with a person nicknamed “Mad Dog,” how did he expect the show to go? First Take isn’t a football pregame show that’s meant to be chock full of hard-hitting NFL analysis. It’s also not Clark’s highly successful The Pivot podcast that can delve into deep and meaningful conversations.

First Take features a rundown of futile topics meant to spark silly debates and banter, mainly so Stephen A. Smith can start yelling. With Smith finishing up his vacation and recovery from shoulder surgery, Russo has attempted to fill the screaming void on First Take, only he clearly hasn’t garnered the respect that Smith has from ESPN’s cast of athletes turned analysts.

Russo’s style is meant for yelling at uninformed radio callers, not former athletes who know a lot more about sports than he does. But Smith, despite not being an uninformed radio caller, understands what makes Russo entertaining and understands that First Take is meant to entertain more than it’s meant to inform. As ESPN’s cast of retired athletes, who never heard of Russo before a few months ago, grow tired of his character, it’s clear that Mad Dog needs Smith as a buffer to help him play the First Take game.