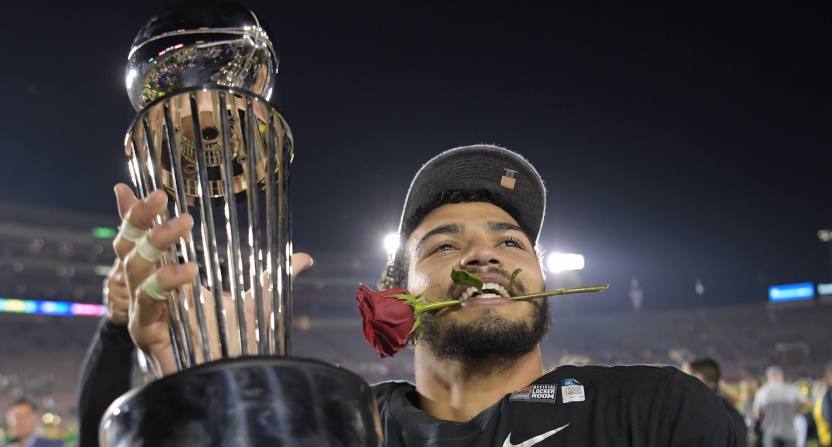 While this year again didn’t have College Football Playoff semifinals played on New Year’s Day (this year’s numbers were good for non-New Year’s Day games, but below the New Year’s Day games), several of the New Year’s Day games it did have posted impressive numbers. As per ESPN, the VRBO Citrus Bowl (Michigan-Alabama, 1 p.m. Eastern) on ABC averaged 14,003,000 viewers, that network’s most-watched bowl game since the 2010 national championship (national championship games since then have aired on ESPN). Meanwhile, the Rose Bowl (Oregon-Wisconsin, 5 p.m. Eastern on ESPN; Oregon linebacker Troy Dye is seen above with the Leishman Trophy awarded to the winning team) averaged 16,304,000 viewers, the second-highest number for a non-semifinal New Year’s Six game in the College Football Playoff era (24 games), behind only last year’s Rose Bowl (Ohio State-Washington, which pulled in 16.78 million viewers; that’s with full streaming factored in, though, and this year’s game only has partial streaming numbers at this point).Meanwhile, the Sugar Bowl (Georgia-Baylor, 8:45 p.m. Eastern on ESPN) drew 10,224,000 viewers. That’s down from last year’s 13.30 million for Texas-Georgia, but it outdrew 2017’s Oklahoma-Auburn matchup (9.5 million viewers). So it wound up as the second-most viewed of the three non-semifinal Sugar Bowls in the CFP era so far. Wednesday’s other game, the Auburn-Minnesota Outback Bowl, doesn’t have numbers out yet.Those Rose Bowl and Citrus Bowl numbers are particularly notable, as they illustrate that even non-semifinal games on New Year’s Day can draw quite well with the right matchup. And the Citrus Bowl certainly had that, with Alabama and Michigan accounting for the second-highest and third-highest regular-season viewership totals this season. Wisconsin-Oregon (11 and 13 in those totals) wasn’t quite as strong of a matchup by viewers, but the Rose Bowl itself always tends to bring in viewers, and the time slot there is favorable. And while this year’s version didn’t have Ohio State (one of the most-watched teams every year, and #1 again this year in the totals), it still did very well. Here’s more from ESPN’s notes on the Rose and Citrus Bowls:

The Rose Bowl Game Presented by Northwestern Mutual featuring Oregon vs. Wisconsin (January 1 at 5 p.m. ET) generated a multi-network audience of 16,304,000 viewers, the second most-watched non-Semifinal New Year’s Six game in the College Football Playoff era (24 games). The audience for the Ducks’ victory surpasses the 2017 Rose Bowl between Penn State and USC (15,740,000 viewers) to earn the distinction. The Rose Bowl audience peaked at nearly 20 million viewers late in the fourth quarter (8:30-8:45 p.m.).…This season’s Rose Bowl audience was more than 20% higher than the 2016 Rose Bowl game (Stanford vs. Iowa).…ABC aired its most-watched bowl game since the 2010 National Championship as the Vrbo Citrus Bowl, between Michigan and Alabama (January 1 at 1 p.m.) generated an audience of 14,003,000 viewers. Among Citrus Bowls all-time, the audience for the Alabama win was the bowl’s fourth-highest audience dating back to at least the 1991 season and its best since the 2008 season (Florida vs. Michigan – 14,780,000 viewers).

And at Sports Media Watch, Paulsen has a good note on the Citrus Bowl:

Except for playoff games, national championships and the Rose Bowl, Alabama’s win was the most-watched bowl game since the 2014 Sugar Bowl (Oklahoma-Alabama: 16.34M). Not coincidentally, that was the last time Alabama played a bowl game with no championship implications.

So those are certainly good numbers, and they add to what’s been a strong bowl season for ESPN and ABC. With complete streaming data in, ESPN says the semifinals are now up eight percent year-over-year (from six percent), and are now officially the most-watched non-New Year’s Day semifinals. And ESPN’s networks are averaging 5,028,000 viewers per game for 30 games (through Jan. 1), even with last year. So the bowls continue to perform pretty well for them.[ESPN]