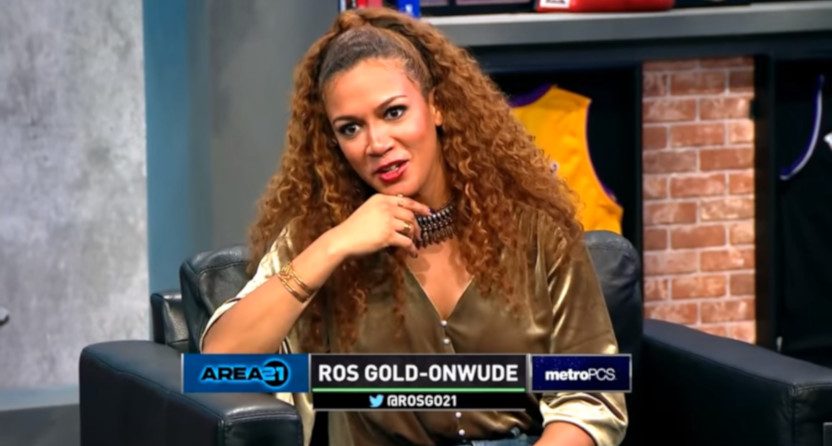 We now know part of what’s ahead for Rosalyn Gold-Onwude. Gold-Onwude joined Turner Sports’ NBA coverage full-time in September 2017 after work with NBC Sports Bay Area, NBC, Pac-12 Networks, and CBS and Turner’s March Madness coverage, but Andrew Marchand of The New York Post reported in July that Turner had opted not to renew her contract for this year. Now, Gold-Onwude announced Wednesday that she’ll be hosting some First Take shows on ESPN over the next months, filling in for Molly Qerim:

So excited to begin the next chapter of my career ☺️ First up: I’ll be hosting @FirstTake on ESPN for a series of shows through August, Sept & beyond! Geeked to join this huge platform w Stephen A & Max while filling in for the fabulous Molly Qerim! 1st show is tomorrow (Thurs)??

It’s unclear if Gold-Onwude’s work on First Take will lead to a larger role with ESPN. That’s a high-profile spot on a high-profile show, so it would seem somewhat unusual to bring someone in just for that rather than give it to someone already in the building. And work in the First Take host role has previously led to even higher-profile roles for Jay Crawford and Cari Champion, and Qerim’s current work in that role has made her a more prominent ESPN figure. All of that suggests that ESPN might use that slot to boost the profile of someone who’s either signed with them overall or someone they expect to be working with for a while. And as the other network beyond Turner with NBA rights, ESPN would be an obvious landing spot for Gold-Onwude if she wanted to continue covering that league.

But, on the other hand, hosting First Take‘s outrageous debates doesn’t necessarily seem all that desirable. And the show has used short-term guest hosts before (including Rachel Lindsay, a former star on ABC’s The Bachelorette, during a week of two-a-days last summer; feel the corporate synergy there!), and it’s unclear just how big “a series of shows” is. And this is a pretty limited tweet from Gold-Onwude, and as of 6 p.m. Eastern Wednesday, ESPN’s press site didn’t have a release posted about Gold-Onwude, something we’d expect to see if they’d brought her on board full-time. So perhaps this is a more limited role, and it’s perhaps notable that Gold-Onwude only said “First up” in her tweet; maybe she has other projects coming at other companies, or other projects with ESPN she can’t talk about yet. At any rate, it will be interesting to see her on First Take.

[Rosalyn Gold-Onwude on Twitter; screencap from a 2017 appearance she did on Area 21 with Kevin Garnett]