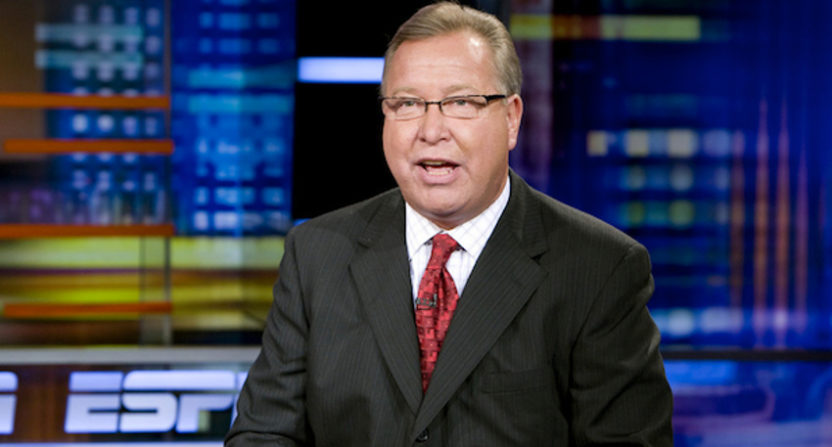 The ESPN layoffs in April included some mentions of Ron Jaworski, with Ed Werder saying on his Doomsday Podcast after being laid off that Jaworski and Merrill Hoge appeared to be on their way out as well. However, there was never any confirmation of that, and it turns out that’s for a good reason; Jaworski himself doesn’t really know if he’s still at ESPN. Earlier this month, he appeared on The Doomsday Podcast with Werder and co-host Matt Mosley, and spoke about the uncertain status of his job, the NFL Matchup show, and his thoughts on debate shows. Here’s the episode:

Here are some transcriptions of Jaworski’s comments. First, here’s what he said when asked about his job status (it starts with Mosley asking Jaworski about that around 27:20):

“I wish I could give you a definitive answer, but I don’t have one. Number one, I’m absolutely very grateful and thrilled to have worked at ESPN for 27 years. I still may continue to work at ESPN, I do not know what the future is going to hold. I still have a contract with them until May 31 of 2022. And if they choose to want to use me in some other areas, that is being talked about with my agent basically as we speak, so I’m kind of the guy in limbo right now.”

Jaworski then goes on to talk about how he views himself as a broadcaster:

“But I do want to continue with some broadcasting. I love what I do. I still maintain my office at NFL Films, and as the film wonk that I am, I try to give the audience something that they normally don’t get. It may be a little bit drill-down football, but I think there’s far too much football on TV that doesn’t really scratch the surface, and I try to drill down and give the viewers and the listeners something that you don’t get anywhere else. Not saying I’m right or wrong, but I certainly am different.”

This leads into a bit of discussion of NFL Matchup in general (it’s been running since 1984, with Jaworski joining in 1990), and Jaworski uses that as an excuse to take shots at debate-centric programming.

“The matchup show was on the air before I started at ESPN. If I do it or not in the future, it will still be a great show. There were times people said ‘The fans don’t care about those Xs and Os.’ That is bull! People care about football. We have so many shows on, uh, all television networks, that do nothing but have a bunch of guys throwing words out there. We use the video, we use the coaches’ tape on the matchup show. There’s a reason it’s the longest-running studio show on television, because of that. It’s unique, it’s different. People at the league, people at the network said it would fail, but here it is, the longest-running show on television, because people want more.”

Jaworski then continued with a shot at screaming personalities.

“And I wish executives at all the networks would realize that. People want more. They don’t want a bunch of people on TV screaming at each other, ‘You’re right’ and ‘You’re wrong,’ they want intellectual conversation, and they want to see why teams win and why teams lose. And the tape shows that, and networks and producers don’t use enough of that.”

Jaworski is somewhat right here that there is a market for serious Xs and Os analysis, and that it can work on TV; NFL Matchup has been providing that for its entire run, featuring analysts like Steve Sabol and Allie Sherman before Jaworski and Hoge, and it’s generally done okay. However, the solution from a business point of view isn’t necessarily just “axe the debate shows and make every show serious analysis.” For one thing, NFL Matchup has other things going for it. The NFL’s the dominant sports property, so repeating this in every other sport might hit challenges, and a preview show like this also has appeal to fantasy football players and bettors. And NFL Matchup‘s history has helped it catch on in ways other detailed analysis shows didn’t; see the evolution of Numbers Never Lie into His and Hers for a counterpoint.

The other issue is that for everyone who says “They don’t want a bunch of people on TV screaming at each other,” the ratings still somewhat disprove that. ESPN’s First Take and FS1’s Undisputed draw a lot of criticism for their brand of shouty hot-takery, and deservedly so, but they’re a year-round format that’s cheap to produce (apart from the salaries for the screaming heads), and one that plenty of people still watch. That doesn’t mean they should be constantly promoted or that every network decision to emphasize them is correct (there’s a good argument that ESPN moving First Take to the main network in place of SportsCenter has really hurt them overall), but the “people want news and analysis, not debate” argument is just as flawed when Jaworski tries it as when Jeff Pearlman blamed ESPN for keeping Stephen A. Smith and laying off others.

Yes, there are many who don’t want debate, but they’re not necessarily going to watch ESPN in those morning time slots regardless of what’s on. And enough people tune in to those debate shows to justify their existence (from a ratings perspective, at least). “People want more intellectual conversation” is  a nice thought, but it’s not necessarily reflective of the reality of sports studio programming in this day and age.

In any case, it’s notable that Jaworski is lobbing some criticisms at the network that’s still somewhat employing him (his “uh, all television networks” is a nice catch, though), and what’s perhaps really interesting here is the uncertainty of his job status. It sounds like NFL Matchup may be done from his comments, but that ESPN may decide to use him somewhere else. And if he’s under contract for that long, there’s strong incentive for them to find something for him to do. This will be well worth watching as the NFL season approaches.