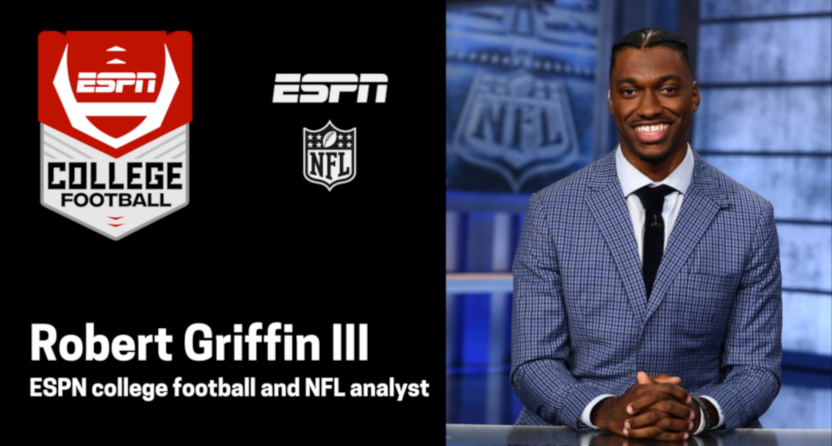 One of the younger NFL analysts out there this fall will be 31-year-old Robert Griffin III, who ESPN announced Thursday they’ve hired as a college football and NFL analyst (following an earlier report of that news from Michael McCarthy of Front Office Sports). Griffin, who won the 2011 Heisman Trophy with the Baylor Bears and was drafted second overall by Washington in 2012, had a long NFL run for much of the last decade with Washington (2012-15), Cleveland (2016) and Baltimore (2018-20). The Ravens waived him in January, though, and no other NFL team seemed to show a ton of interest in bringing him in (despite his tweeted trick shot video), but McCarthy reported that he was the subject of “a fierce offseason bidding war between ESPN and Fox Sports.” And ESPN won, and will use him as a weekly CFB analyst and more, as Griffin tweeted Thursday (with a shoutout to Rece Davis for audition help):

Still ready to play but excited to join @espn in the booth pic.twitter.com/bEIWCSxpac

Honored for the audition to have been with you Rece and grateful for your humility ?? https://t.co/J59BDmzUnV

As per Griffin’s tweet, he is still interested in playing. And as Ian Rapoport of NFL Network reported, Griffin’s contract with ESPN has an out if an NFL team wants to bring him in:

Veteran free agent QB and budding broadcasting talent Robert Griffin III is headed to ESPN, source said. He still wants to play and has an out in his contract if opportunity arises. But he’s a broadcaster now with a very high ceiling.

Related: Robert Griffin III drawing interest from ESPN and Fox, with both networks bidding for his services

There have been some ESPN personalities who have been extended latitude to chase a sports dream (see Tim Tebow’s baseball career), so while that kind of provision isn’t typical, it’s not unprecedented. And that probably makes sense for ESPN to include that on several fronts. For one thing, an easy out is a good inclusion in a bidding war, as it makes your contract look better without having to throw in any more money. For another, ESPN in particular has such a deep roster of NFL and college football analysts that they can easily replace Griffin if he does wind up returning to the NFL. And for a third thing, this means that they get Griffin while he’s excited about working for them, but they’re not the ones forestalling a NFL dream if he gets a further opportunity there. And while they have him, they’re planning to use him in a few different ways; here’s more on that from their release.

“Robert has been on our radar for a while and we expect him to make an immediate impact on our college and NFL coverage,” said Lee Fitting, ESPN senior vice president of production. “His knowledge of the game, his fresh-off-the-field insights and his charisma make him uniquely positioned to move into this new role, and we are particularly excited to have him call a big college game every week.”

“College football has always been an integral part of my life, first as a kid watching it, then as a young man playing it,” said Griffin III. “Some of my greatest sports memories come from my collegiate days surrounded by the pageantry, the traditions and the passion of the fans. College football is life changing for many and I will always look back on my time playing it with tremendous gratitude.

Griffin III added: “Knowing how much the game of football helps shape lives, and understanding the aspects of the commitment it entails, is why I am thrilled to have the opportunity to join ESPN for both college and NFL programming. I look forward to being around the players, coaches and fans while providing unique insight to bring the game to life for the viewers.”

This also shows a trend that’s increased at ESPN in recent years of hiring analysts who can contribute to both college football and NFL coverage. Those areas used to be much more siloed than they are today. The increased crossover makes a fair bit of sense for ESPN (especially for weekday studio show appearances), as that gives them more scheduling flexibility and probably means they don’t need as many people overall as they would if each person was either NCAA or NFL. It does bring an extra burden for these analysts, as following even one league closely is challenging enough, but some have managed to pull off this double duty well. We’ll see if Griffin can join that group.