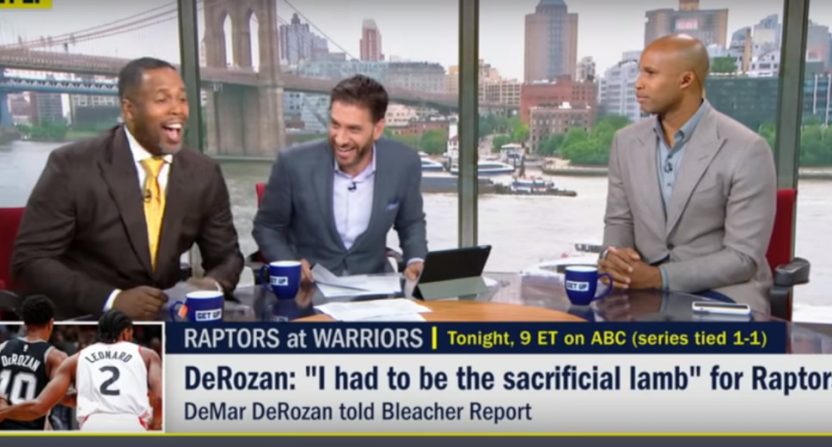 It’s been quite the two days for Damon Jones content, as the long-time NBA player turned coach turned ESPN analyst wound up in a feud with Richard Jefferson, beginning on Get Up Wednesday. But the funniest part of that is how Jones’ comments there led to one viewer trying to get ESPN to fire him, but tagging another Damon Jones (a professor at the University of Chicago’s Harris School of Public Policy) instead:

This person is truly on campaign to get me fired … from ESPN, and I just wanna know where have all my ESPN checks been sent? pic.twitter.com/PklJ4oIdlb

There’s nothing like a good Twitter misidentification, previously seen with everyone from Chris Conte (twice!) to Mark Lazerus to Brandon Marshall to Marcelo. So, what did ESPN’s Jones do to kick this all off? Well, he responded to Jefferson telling a story about how he was traded from the Nets to the Bucks in 2008 after seven years with the team (Jefferson was comparing that to DeMar DeRozan being traded to the Spurs) with quite the one-liner:

Jefferson says “Later, my phone rings and it’s Rod Thorn saying ‘Hey, it’s draft day, we just traded you to Milwaukee. That’s how I found out after seven years of service with the Nets.” And Jones responds with “Hey Greeny, guess what, the Nets got better.” Jones and Greenberg both crack up, and Jefferson sits there staring them into oblivion:

Later, Jefferson went after Jones on Twitter, even referencing the March 2018 incident where J.R. Smith threw a bowl of soup at Jones (then a Cleveland Cavaliers’ assistant coach):

If anyone was wondering why this man got soup thrown on him it’s because of absurd statements like this ?????‍♂️.. Nets 2009 12-70 and started the season 0-18. My silence was me trying to not expose him on National TV. ?? https://t.co/DMYRwLualo

Meanwhile, Jones sort of apologized, but not entirely:

I want to apologize to @Rjeff24 for what I said on @GetUpESPN yesterday.I think he’s a great player and the Nets didn’t get better when he left.But the Punch line I came with was fire and on point!So for that reason I couldn’t pass up the opportunity to make tons of people laugh!

And Jefferson told him Thursday to “keep that same energy”:

However, on Get Up Thursday morning, Jefferson said “Oh, shut up, Damon Jones. I do not accept the apology, not from him.” And Jay Williams responded with “Nobody makes fun of Little-Ear Richard other than me!”

That’s quite the sequence of events, and it sure seems like Jefferson’s being a little sensitive to some ribbing. But he’s right that that trade (him for Yi Jianlian and Bobby Simmons) didn’t work out too well for the Nets, so Jones’ punchline isn’t based in reality.

At any rate, the funniest part of this whole thing may be that fan getting mad at the wrong Damon Jones, and insisting that “As a Disney stockholder,,” ESPN should fire Jones. Yeah, that’ll really work, bud; they absolutely make hiring decisions based on one Disney stockholder, especially one whose Twitter bio is “Gonzaga University alum, financial analyst, lover of life.” But for future reference for all the other mad fans out there, a search for “Damon Jones” on Twitter produces the professor first (even though his account isn’t verified, unlike ESPN’s Jones) and the basketball pundit second.