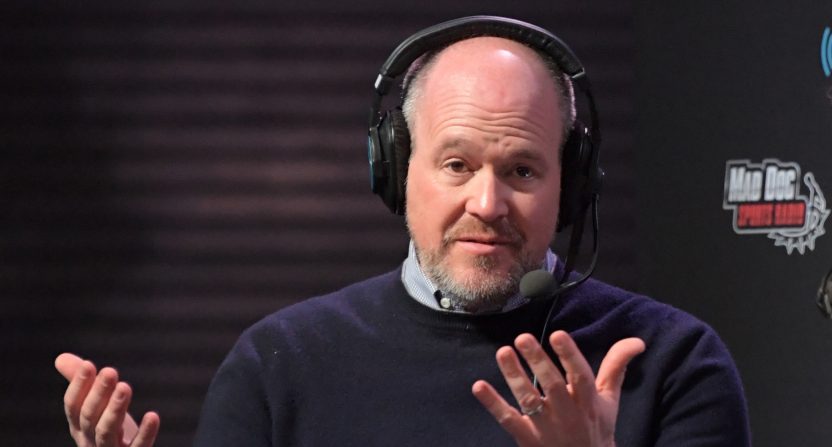 The Rich Eisen Show is currently preparing for a move from Peacock to The Roku Channel in September. According to Eisen, there were discussions at some point to bring the show to ESPN, where he worked from 1996 to 2003.

Eisen was a guest on The Ariel Helwani Show this week when he was asked if he ever considered returning to the Worldwide Leader after leaving in 2003 to become the first on-air talent of the NFL Network.

“Were you ever close to going back to ESPN at any time in the last 19 or so years,” asked Helwani. “Was there ever a phone call, conversation, something?”

“Yeah, there have been,” replied Eisen. “For this show, actually.”

Used to watch @richeisen co-host SportsCenter on loop for hours, so it was a huge honor to have him on the show.

When asked when those talks took place, Eisen demurred, saying “that’s as far as I’ll go. I don’t know why it didn’t happen. I was ready to go for this show. Potentially both TV and radio, same time.”

The show broadcasts from 12 to 3 p.m. Eastern every weekday and will be keeping that timeframe when it moves next month. The radio portion will remain on Westwood One.

The Rich Eisen Show has been broadcast since 2014, though it’s shuffled between Audience Network, YouTube, Peacock, and now The Roku Channel across that time.

While there’s a lot of reported animosity between ESPN and many of the former talents who moved over the years (including Helwani), Eisen told Helwani that he has no ill will towards the network and has “no problem at all” with them.

“I have no animosity at all,” said Eisen. “I love that place. I love the people there. My children exist because I met my wife there. I watch it all the time. The number of guests I have on the show who I used to work with or still work there. I have no problems at all with my relationship with ESPN.”

Eisen also shared that he appreciates the way that fans will still connect him with ESPN when they see him in public.

“When I hear the SportsCenter theme hummed to me in the airport as happened about a month ago or people call me that they watched me at ESPN and I inform them it’s been 19 years, they’ll apologize thinking they’ve offended me, but it doesn’t offend me at all,” said Eisen. “I just love the fact that I have a connection to a whole different generation than my age. That’s a treasure. It really is.”