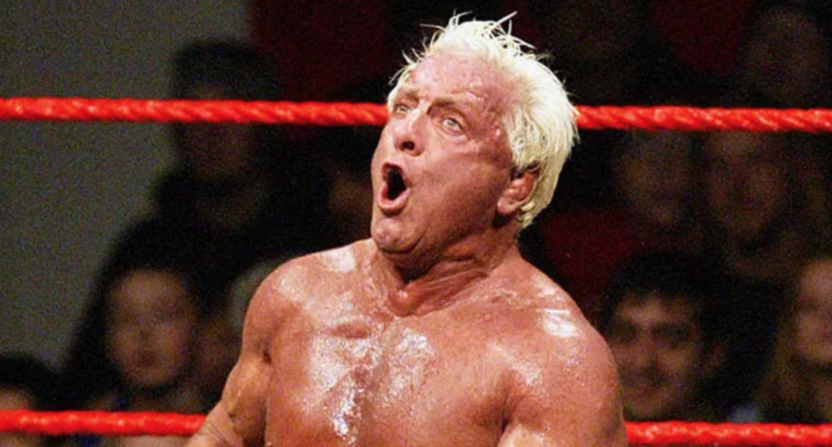 ESPN’s next 30 for 30 documentary, on pro wrestling legend Ric Flair, has been long-awaited and eagerly anticipated. Here at Awful Announcing, we’ve been keeping tabs on the development of Nature Boy for two years. The film, directed by Rory Karpf will finally premiere next Tuesday, Nov. 7, at 10 p.m. ET. We’ll have a review prior to the airing.

As Karpf explains in an essay promoting Nature Boy for ESPN.com, making a film about Flair has been a long process, arguably going back to his childhood. As an eight-year-old, Karpf saw Flair defend his NWA title and shouted “Wooo!” at him as the champion walked to the ring. Staying in character as one of wrestling’s greatest heels, Flair called the boy a little brat.

That stayed with Karpf, who included Flair in his previous 30 for 30 film, I Hate Christian Laettner, because he wanted a great pop culture bad guy to explain what made Laettner one of sport’s most celebrated villains. The reaction to Flair’s appearance in the film was so popular that ESPN Films executive John Dahl took notice and suggested to Karpf that a film on Flair could be a good idea.

But Karpf may have been too much of a Flair fan, at least for his initial cut of Nature Boy. After viewing it, Dahl thought the film was too much of a standard biography. That may have been fine for fans of Flair’s career, but a 30 for 30 is presumably going for a wider audience of sports documentary fans who don’t follow pro wrestling.

Dahl also disliked another attempt that focused more on the 1980s, the decade during which Flair’s fame was at its peak. But Karpf cut a new opening to the film in which Flair described himself and the events of his life in his own words. (You can get a taste of that in this Charlotte Observer piece on the film, as well.) That was the personal touch that Dahl apparently felt the film needed.

Karpf explains plenty more about the filmmaking process, the length of which tested Flair’s patience, in his article. For instance, some of Flair’s stories needed to be portrayed for the viewer. The decision was made to use animation, which has been done in previous 30 for 30 films such as Benji. But it’s an unconventional approach for sports documentaries. Whether or not Flair fans like it and respond to a film that’s more about what living the life of Ric Flair was like, remains to be seen.