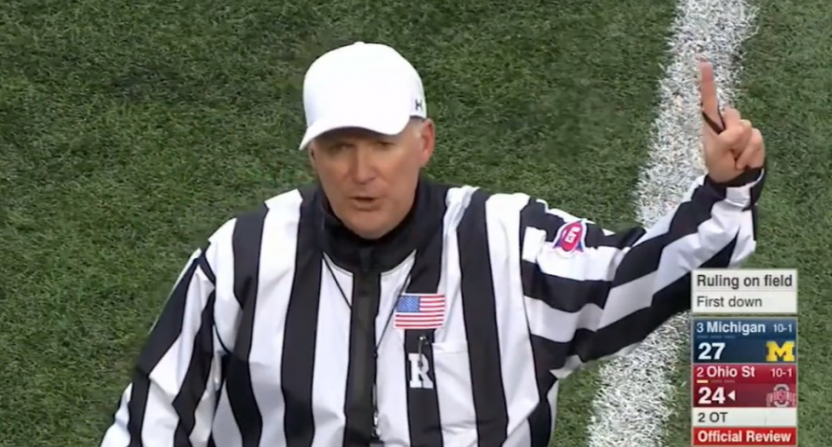 More than three years later, the 2016 football game between Michigan and Ohio State still gets discussed among Wolverines and Buckeyes diehards. For Michigan fans, the sore subject is J.T. Barrett’s run on 4th-and-1 in double overtime that was ruled a first down. Ohio State retained possession and one play later, Curtis Samuel ran 15 yards for a touchdown and 30-27 victory, continuing the Buckeyes’ dominance over Michigan in their fierce rivalry.

What makes that fourth-down play live in infamy is that the ABC/ESPN telecast never provided a camera angle that clearly showed Barrett got the ball over the 15-yard line. Without conclusive video evidence to overturn the call on the field of an Ohio State first down, the ruling stood.

Michigan, Ohio State, and college football fans disagreed as to whether or not the proper call was made. But nearly everyone who watched the telecast could agree that ABC/ESPN failed by not having a camera in proper position to show if Barrett got the first down. Among those critics is referee Dan Capron, who was part of the officiating crew for that ballgame.

Capron, 63, retired following the past Big Ten season, calling it an officiating career after 20 years on the job. He looked back on his career with the Chicago Tribune‘s Teddy Greenstein in a piece that published over the weekend. As you might expect, Capron’s involvement in that 2016 Michigan-Ohio State game came up and he gave his perspective on the crucial fourth-down call. In his view, ABC/ESPN is to blame for not providing a conclusive camera view of the play.

“Of course the ruling on the field was that he made the line to gain (on fourth-and-1) and it was going to be a first down. The buzzers went off and it got kicked up to replay. I don’t know why the network didn’t have a camera right on the yard line. It was broadcasting malpractice. Because there was no camera on the yard line, there wasn’t a good angle to make the determination on an excruciatingly close call. I’m talking about within an inch. So replay couldn’t get a read on it, and they did what they’re supposed to do. The ruling on the field stands.”

Calling the lack of a conclusive camera angle “broadcasting malpractice” echoes the thoughts of Awful Announcing’s Alex Putterman at the time. Shortly after the game, Putterman lamented the failure of the telecast to be in proper position to show the play. How could producers not place a camera right at the 15-yard line on such a pivotal run?

Ohio State fans will surely be amused by Capron saying Michigan coach Jim Harbaugh behaved like “a fourth-grader” for throwing down his headset and play cards after the call, which drew an unsportsmanlike conduct penalty and eventual $10,000 fine. Buckeyes supporters may also be surprised by Capron revealing that coach Urban Meyer preferred not to communicate with officials, leaving that to a staff member.

The Barrett first down will be a hotly debated play among Michigan and Ohio State fans for years to come, perhaps decades. Wolverines supporters will always contend that the ball didn’t cross the 15-yard line, while Buckeyes devotees believe the correct call was made. And both fanbases will point to the inconclusive video as evidence for their arguments.