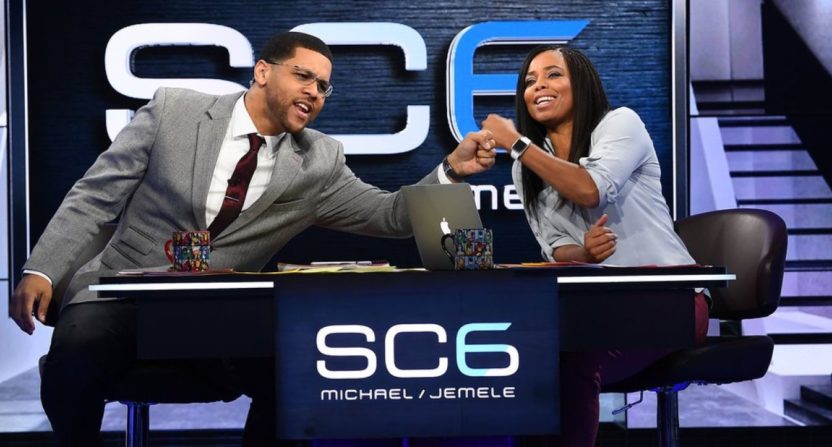 After Jemele Hill issued a Twitter statement Wednesday night that she regretted how her tweets about President Donald Trump being a white supremacist “painted ESPN in an unfair light” and the company issued their own statement of “we accept her apology,” it seemed like the flames of controversy could die down a bit. Then a keg of gasoline got added Thursday, with ThinkProgress’ Lindsay Gibbs reporting (with Judd Legum) that ESPN tried to pull Hill off her SC6 show Wednesday but was foiled when co-host Michael Smith refused to do it without her and other African-American ESPN hosts Michael Eaves and Elle Duncan declined to step in. Here’s the key part of Gibbs’ report:

Hill — who was caught in the middle of a firestorm of controversy that began on Monday night when she tweeted that President Donald Trump was a white supremacist, which escalated when ESPN issued a statement on Tuesday reprimanding her comments and which exploded when White House Press Secretary Sarah Huckabee Sanders said that Hill’s tweets were a “fireable offense” — was calm and composed throughout the hour, and the show went on as usual.

However, two sources familiar with the situation told ThinkProgress that this was not the original plan.

ESPN originally tried to keep Hill off the air on Wednesday evening, but Smith refused to do the show without her, the sources said. Both sources also said that producers reached out to two other black ESPN hosts, Michael Eaves and Elle Duncan, to ask them to serve as fill-ins for the show — but Eaves and Duncan did not agree to take the place of Hill and Smith, either.

…Faced with the possibility of having to replace Hill and Smith with white co-hosts, the sources said, ESPN then called Hill and asked her to come back on her show.

Our statement: "We never asked any other anchors to do last night’s show. Period.” https://t.co/EJhnjbr7yq

And ESPN’s Rob King told Gibbs having Hill and Smith do the show as they did was “the outcome we always desired”:

“Yesterday was a hard and unusual day, with a number of people interpreting the day without a full picture that happened,” Rob King, the senior vice president for news and information at SportsCenter, told ThinkProgress. “In the end, ultimately, Michael and Jemele appearing on the show last night and doing the show the way they did is the outcome we always desired.”

Gibbs’ story also notes that Eaves sent out a tweet expressing frustration at 4:30 p.m. Eastern Wednesday, 90 minutes before SC6, and that Hill later posted a photo (seen above) with Eaves and other National Association of Black Journalists members (the organization sent a statement in support of her):

Love that my @NABJSports brothers came to check on me pic.twitter.com/a02nKHYmjK

What does this all mean? Well, King’s comment that people outside ESPN don’t have the full picture is probably accurate, and it’s quite possible that the full details may never emerge. There isn’t a ton of room where both LaPlaca’s “We never asked other anchors to do last night’s show. Period.” and Gibbs’ report that two sources said ESPN “tried to keep Hill off the air” and “producers reached out to two other black ESPN hosts, Michael Eaves and Elle Duncan, to ask them to serve as fill-ins” can co-exist, though. It’s somewhat telling that King’s denial was a bit open-ended rather than a flat denial, which seems to point to that perhaps behind the scenes, some conversations may have been taking place in some corners of the company.

It’s possible that there is some semantic room between “reach out” and “ask” (i.e. maybe ESPN PR doesn’t count feeling out if Eaves and Duncan would take the place of Smith and Hill to be actually asking them to do so). It’s also perhaps possible that they were considering options just in case the controversy ramped up further, perhaps if the president himself weighed in; that didn’t happen, so maybe ESPN wouldn’t have pulled the trigger on replacing Hill even if Eaves and Duncan had agreed to fill in. But there’s a pretty stark divide between ThinkProgress’ report and ESPN PR’s response.

If ESPN did in fact try to pull Hill off the air, that seems like a horrible idea. You can give it a charitable spin of them trying to let the controversy die down by having someone else fill in (not a unusual practice at the company), but many critics were already mad at them for their claim that Hill’s tweets (which didn’t mention ESPN, and weren’t on a ESPN platform) were “inappropriate” and their decision to not stand by her more strongly against the waves of criticism.

Hill is beloved by many of her colleagues, as both Gibbs’ story and Bryan Curtis’ Ringer piece on SC6 illustrate. She received a ton of internal support following the criticism of her tweets, both publicly and privately; the colleagues who spoke to Richard Deitsch are one example, but countless ESPN figures beyond that have tweeted support for Hill, with some backing her tweets fully and some saying that they support her even if they don’t agree fully with what she did. So trying to pull her off the air seems likely to create massive internal rebellion, and Gibbs’ story suggests that’s just what happened.

ESPN was already under siege from many critics for not standing by their employee more thoroughly here, and even claiming that her tweets were “inappropriate.” This report seems likely to further inflame that criticism. It’s not going to make critics on the right happy, either. And it suggests that this story is far from dying down.