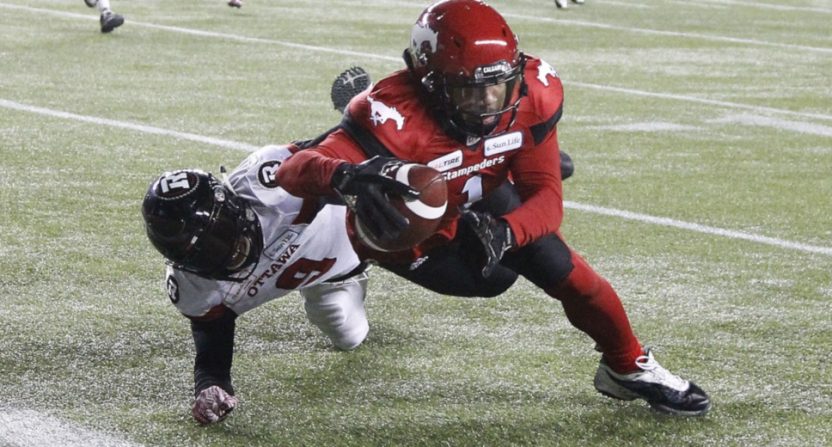 ESPN’s newly-released schedule of CFL regular-season and playoff broadcasts for 2019, the first season under the new deal they signed with the league in January, looks a lot like last year’s; at least 20 games will again be shown live on ESPN’s TV channels (including the four playoff games and the 107th Grey Cup), with the remaining 66 live on ESPN+. (In Canada, all games are shown live on TSN.) But that announcement also includes the schedule of June’s games, so it’s worth taking a look at where the most interesting matchups are. Here are those matchups, ranked from 10 (worst) to (1) best.

10. Montreal Alouettes at Edmonton Eskimos (Friday, June 14, 9 p.m. Eastern, ESPN2): The Alouettes were one of the league’s worst teams last year (5-13, ahead of only 4-14 Toronto), they’re in ownership turmoil (now owned by the league while they look for another buyer), their preseason has been rough, and they don’t even have the entertainment factor of Johnny Manziel playing poorly any more. Meanwhile, the Eskimos were 9-9 last year (tied with the B.C. Lions for last in the West, they missed the playoffs thanks to losing the head-to-head tiebreaker), but have a whole lot of turnover to deal with, especially at quarterback; long-time starter Mike Reilly signed with the Lions (now run by former Edmonton GM Ed Hervey), so Edmonton signed veteran Ottawa pivot Trevor Harris, but even their backups (Logan Kilgore and Jeremiah Briscoe) are both new to the team. We’ll see how the new-look Eskimos look; the bet is probably better than the Alouettes.

9. Montreal Alouettes at Hamilton Tiger-Cats (Friday, June 28, 7:30 p.m. Eastern, ESPN2): The Tiger-Cats were 8-10 last year and won a first-round playoff game, so they look to be in better shape than the Alouettes. And they picked up a nice preseason win over Ottawa this weekend. But this matchup still doesn’t look great.

8. Hamilton Tiger-Cats at Toronto Argonauts (Thursday, June 22, 4 p.m. Eastern, ESPN+): As mentioned, the Argonauts were the league’s basement dwellers last year, and they still seem to have some problems. But this one (a game that was moved earlier so fans can attend a nearby Arkells concert afterwards) gets a bit of a bump over the previous matchups thanks to the Toronto-Hamilton rivalry; these two teams have been playing in one form or another since 1873, and that always makes the games between them fun.

7. Saskatchewan Roughriders at Hamilton Tiger-Cats (Thursday, June 13, 7:30 p.m. Eastern, ESPN+): The Roughriders finished 12-6 last year, the second-best record in the league, and while they were upset by the Winnipeg Blue Bombers in the first round of the playoffs, they should be a strong team again this season, even with head coach Chris Jones leaving for a role with the Cleveland Browns and being replaced by Craig Dickenson. Saskatchewan and Hamilton have some interesting history, too, including a Roughriders win over the Tiger-Cats in the 101st Grey Cup in 2013.

6. Edmonton Eskimos at Winnipeg Blue Bombers (Thursday, June 27, 8:30 p.m. Eastern, ESPN2): The Blue Bombers have won 10 games or more for three straight seasons (11-7, 12-6, and 10-8 marks, respectively), but last year marked their first appearance in a division final since 2011. We’ll see if they can build on that momentum this year; how they do against West opponents like Edmonton will probably have a lot to do with that.

5. Winnipeg Blue Bombers at B.C. Lions (Saturday, June 15, 10 p.m. Eastern, ESPN2): The Lions were 9-9 last season and lost in the first round of the playoffs (they crossed over to face Hamilton), but there’s some further excitement around them with Hervey fully taking over (he was with the team the last two years as well, but was working with long-time coach/GM Wally Buono, who retired this offseason), with new head coach DeVone Claybrooks, and with Reilly coming in at quarterback. The Bombers should present them with an interesting Week 1 test.

3. Saskatchewan Roughriders at Ottawa Redblacks ((no, we do not use the team-desired REDBLACKS around here), Thursday, June 20, 7:30 p.m., ESPN+): Ottawa might be the most intriguing team to keep an eye on in the early season, as they posted an East-best 11-7 record and went to the Grey Cup last year, but that was with Harris under center (or centre, for the Canadians reading this). New starter Dominique Davis is far from proven at the CFL level. But he’s got a lot of talent around him; we’ll see how he does against the Roughriders.

2. B.C. Lions at Calgary Stampeders (Saturday, June 29, 7 p.m. Eastern, ESPN+): The Stampeders continued their recurring excellence last year, going 13-5 and winning the Grey Cup. They’ve won at least 13 games every year since 2012, at least 11 each year since 2009, and at least 10 each year since 2007. They’ve also appeared in four out of the last five Grey Cups, winning two. And with quarterback Bo Levi Mitchell opting to stay around on a new four-year deal instead of trying free agency or the NFL, they seem set to do well again. We’ll see how Brent Monson (the team’s longtime linebackers’ coach) does in his new role as defensive coordinator (replacing Claybrooks, who will be on the opposite sidelines here as B.C.’s head coach), but with continuity at quarterback (Mitchell), head coach (Dave Dickenson, Craig’s brother) and general manager (John Hufnagel), the Stampeders again look like a CFL favo(u)rite. Oh, and Calgary’s hosting the Grey Cup this fall, providing further motivation still for a strong Stampeders’ season.

1. Ottawa Redblacks at Calgary Stampeders (Saturday, June 15, 7 p.m. Eastern, ESPNEWS): The rematch of last year’s 106th Grey Cup (seen above, Calgary won 27-16) looks like the most interesting game on the June schedule, with the CFL again continuing its tradition of an early Grey Cup rematch. This one should be notable for a look at how Davis does as Ottawa’s new QB, especially against a tough Calgary defens(c)e, and it should give us a sense of if the Redblacks are likely to repeat their East Division-winning ways with a new pivot.

Overall, it’s interesting that two of the matchups that look the most promising (Saskatchewan-Ottawa and B.C.-Calgary) are on ESPN+ rather than TV, and that two of the ones that look the worst (Montreal-Edmonton, Montreal-Hamilton) are on ESPN2, which has even wider distribution than ESPNEWS. But the CFL schedule on U.S. TV is generally more about where there’s space with respect to the other things ESPN airs than about the quality of the matchups; CFL games often draw okay audiences for ESPN’s secondary channels (especially as there aren’t any production costs involved; ESPN takes the TSN feed), but there often isn’t a big difference in the numbers for a good CFL matchup and a bad one, and the CFL isn’t exactly a high priority relative to other ESPN content.

So U.S. fans looking to watch quality matchups will probably have to pay extra for ESPN+ if they don’t already, especially as the season goes on. The full TV schedule isn’t out yet, but the linear games tend to decrease dramatically once the summer ends and ESPN has more content from other leagues. For example, last year saw four linear games in early August, none in September, one in October, and then nothing further until November’s playoffs. Thus, there will likely again be a lot of ESPN+ games as the season goes on.