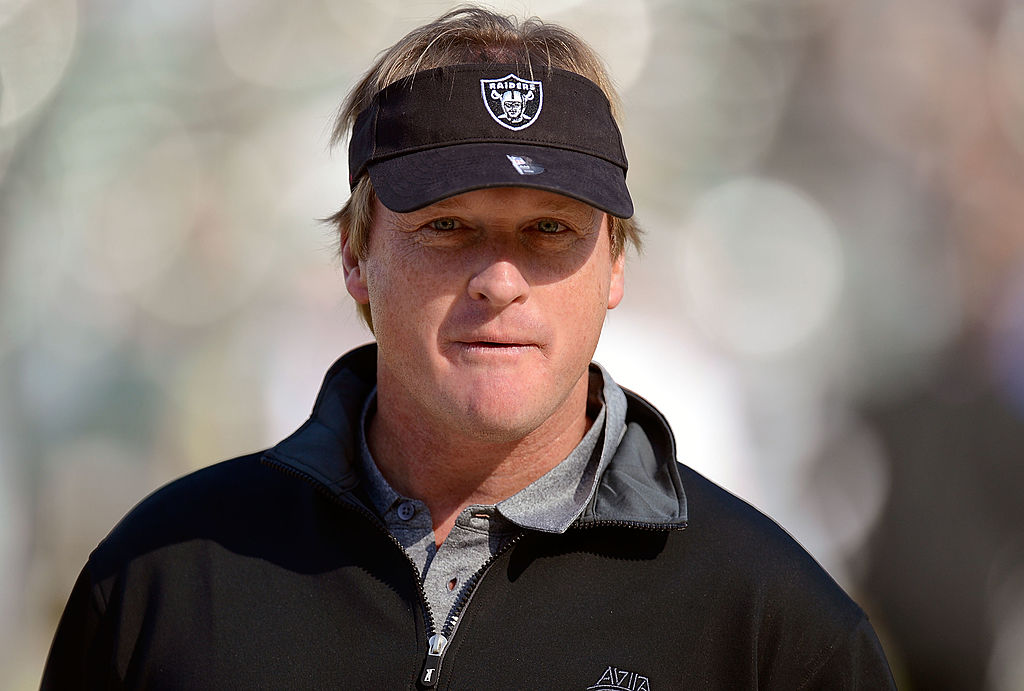 The world is pretty convinced that after many false starts, ESPN Monday Night Football analyst Jon Gruden will in fact be leaving broadcasting to take the Oakland Raiders’ head coaching job. In fact, ESPN colleague Adam Schefter declared Sunday that “Jon Gruden is going to be the next coach of the Oakland Raiders. The only question is when it happens.”

But while Gruden has confirmed his interest in that job, he hasn’t been announced as the new coach yet, and he’s still planning to work ESPN’s broadcast of the Tennessee Titans-Kansas City Chiefs wild-card playoff game Saturday.

Analysts often get some inside information on teams in production meetings, which could be particularly notable with the Chiefs given that they’re a division rival of the Raiders. Gruden told Jerry McDonald of the Bay Area News Group Tuesday that there may be some awkwardness there, also notable considering that he and Kansas City head coach Andy Reid worked together in Green Bay, but that he’s fine with it:

“They played my brother (Jay) on Monday Night Football once too, so there will be some awkward moments and we’re probably going to laugh a little bit about it, but that’ll be cool,” Gruden said. “If I have to sit in the truck with my eyes closed, so be it.”

There is a lot of potential for awkwardness with this broadcast, both in the production meetings and on the air. Are the teams going to be more coy answering questions from Gruden than they normally would, considering that they might be facing him as an opposing coach next year? Is Gruden going to ask them less specific questions than he normally would because of that? Will they have him out of the production meetings altogether?

And, when it comes to the actual broadcast, will Gruden be more restrained with what he says than normal, considering that he’s now the presumed next coach of the Raiders, not just an analyst? And will ESPN mention that, and/or any developments in the Raiders’ coaching search, on-air during the game? Will Gruden have to dial down his “THIS GUY!” comments about potential free agents he wants so those doesn’t get used against him in contract negotiations and/or lead to tampering violations?

In some ways, though, it’s much better to have this as a disclosed conflict of interest than it would be if there wasn’t Gruden-to-the-Raiders buzz and he left for that job unexpectedly after a broadcast. The Chiefs (and Titans) know that Gruden is interested in the Raiders’ job and likely to get it, so they can moderate what they say to him if they feel compelled to do so. And most viewers will already know Gruden’s likely to head to the Raiders, and if it’s mentioned on air, all viewers will know that, so they can then apply that information to his comments.

It’s certainly unusual for a broadcaster to be calling a game while preparing to take a coaching job, but at least this move isn’t going to surprise those involved.

But the interview with McDonald is also notable for Gruden confirming that he wants to be the Raiders’ coach, but for him being coy about how far along that is:

“My understanding is they’re interviewing candidates this week and they’re going to let everybody know sometime early next week or whenever they make their decision,” Gruden said.

Asked specifically if he was a candidate, Gruden said, “Well, I think I am being considered, yes. I hope I’m a candidate.”

It seems from most reports that Gruden as the Raiders’ coach is a pretty sure thing. But there’s some logic to dragging this out from both sides. For one, it helps Oakland avoid a fine for a Rooney Rule violation; they can interview a minority candidate and claim that’s a real interview, even if it probably isn’t. For another, it lets Gruden call this playoff game for ESPN, which means the network doesn’t have to promote a new color commentator on short notice.

While ESPN has plenty of NFL analysts who could potentially replace Gruden, and could also look at outside figures, they’re much better off making that decision ahead of a NFL season, not ahead of their final game of the season. Broadcasts need not just talent, but chemistry, and trying to find chemistry on short notice could be problematic for a playoff game.

And it’s not like Gruden or the Raiders are necessarily missing out from not having this deal done this week. While there are important moves to be made in the near future, especially when it comes to hiring assistant coaches, lots of teams are in a holding pattern while they search for new head coaches. Many top assistants can’t be officially contacted yet, as their teams are still in the playoffs.

Negotiations can always be done unofficially, too, as Gruden was reportedly reaching out to assistants even before he had a real NFL landing spot, so if Oakland provides him with private assurances the job is his, there’s a lot he can do before it’s officially announced

But still, there is a bunch of awkwardness here if it does turn out Gruden’s the new Raiders’ coach. And it should make for a very interesting broadcast Saturday.