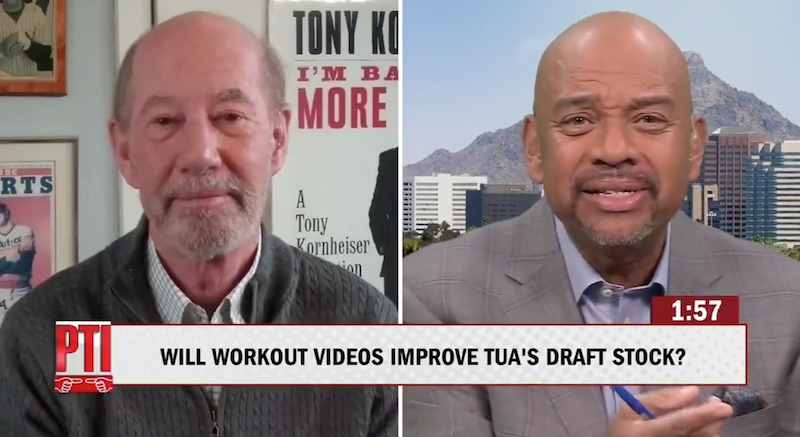 We’re nowhere near getting back to normal as a society while the COVID-19 outbreak continues throughout the country. Many people are living in isolation under “stay-at-home” orders from their state and county governments, businesses (especially restaurants) have shuttered or are operating under significant restrictions, and sports have shut down under social distancing guidelines prohibiting large gatherings.

Those same quarantining and social distancing considerations apply to TV production as well. Virtually every studio show on television now has hosts and guests contribute remotely due to coronavirus concerns. That includes ESPN’s Pardon the Interruption, which was suspended when the network closed production from its Washington, D.C. studios. (Not to mention that the sports world’s shutdown gave PTI no events to comment upon.)

But after a week or so of PTI (along with ESPN’s other debate shows like Around the Horn and Highly Questionable) producing remote segments to post on social media, Tony Kornheiser and Michael Wilbon are back on ESPN. No, PTI is not yet back on the air at 5:30 ET. But since Monday, the show has returned to an extent with segments on SportsCenter, discussing stories such as NFL Draft prospect Tua Tagovailoa posting workout videos online.

"Is that TikTok? I don't even know what that is!"

Kornheiser and Wilbon have had PTI segments on SportsCenter before, so this isn’t entirely different from what they’ve done before. The big difference is that Kornheiser is still broadcasting his segments from home while Wilbon is working from a TV studio, instead of the two recording video at home (with their wives behind the camera) that needs to be edited together.

While the SportsCenter segments look more professional and resemble what PTI typically looks like when Wilbon isn’t in Washington, D.C., they lack the charm of seeing the two TV personalities at home. The clips on Twitter and Instagram were entertainingly relatable with Kornheiser and Wilbon in “civilian” attire (Mr. Tony often wearing a Binghamton University cap), resembling the circumstances many of us currently live under.

"So Dracula's father gave you that?" ?‍♂️ pic.twitter.com/NI9UXDrvDr

On his podcast Monday, Kornheiser explained how PTI will currently work.

Tony Kornheiser on the mini-PTI segments he and Michael Wilson are recording for SportsCenter: https://t.co/rA1evXrvqv pic.twitter.com/iXF7HUngBY

“We’ll fold it into a SportsCenter at around the same time of day,” said Kornheiser. “We’ll be taped earlier. When we tape PTI, we usually stop at 5:25 so if something happens, we can go back into the show. But since we’re on somebody else’s show, we won’t do that.”

As producer Marc Sterne said to Kornheiser, the PTI segments are a return of something familiar to our televisions. Obviously, we have a long way to go (speculation of which depends on who you choose to believe) until we get back to normal. But a little bit of PTI on ESPN is comforting.

—@katienolan with the words we NEVER thought would come out of her mouth ? pic.twitter.com/9jtCnZldQc

In the meantime, Around the Horn and Highly Questionable continue their enjoyable home versions on social media. But maybe we’ll see them back on TV soon too, though the bigger panels on those shows make production more difficult to manage. We’re all getting through this slowly.