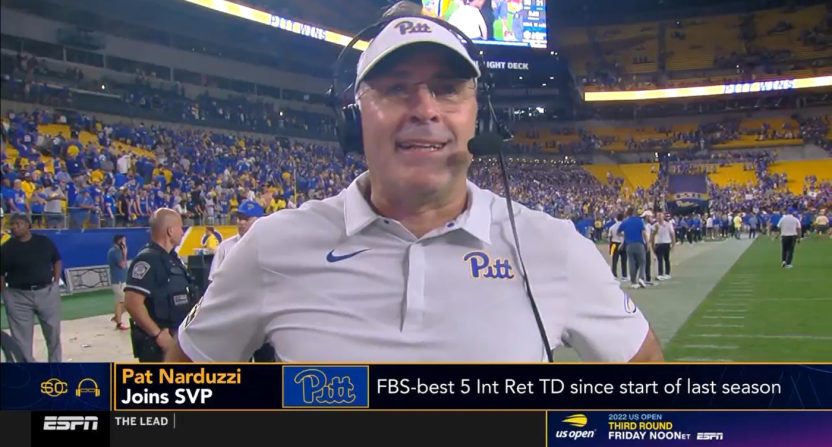 The Backyard Brawl returned for the first time in over a decade Thursday night, rekindling one of college football’s best rivalries as the Pittsburgh Panthers hosted the West Virginia Mountaineers with much hype and fanfare.

Despite getting the win, Pitt head coach Pat Narduzzi wasn’t thrilled with the way his team played against their rival. And he was even less thrilled with ESPN’s promotion of the matchup. Following their 38-31 victory over WVU, Narduzzi joined Scott Van Pelt’s edition of SportsCenter and blasted ESPN for disrespecting Pitt fans.

“I saw some stat it was going to be 75 percent West Virginia fans. You guys mess that up on ESPN for sure. It was certainly all Pitt here today,” Narduzzi ranted. “ESPN disrespected our fans and they showed up today, and I love to see that.”

After his interview with Van Pelt, Narduzzi continued ripping ESPN during his postgame press conference, doubling down on his belief that the Worldwide Leader disrespected Pitt fans.

“ESPN had some bad facts, Narduzzi told reporters. “They disrespected our fans, and our fans showed up. They were unbelievable all day today,”

It wasn’t quite blaming ESPN for attempting to alter the outcome, but “bad facts” is still a damning accusation by Narduzzi. But to Narduzzi’s credit, ESPN did share a graphic on College Football Live claiming 75 percent of the fans attending the Backyard Brawl would be rooting for WVU. And adding to his “bad facts” claim, ESPN used ticket website Vivid Seats as the source of their information.

Prior to the game, ESPN discussed the Pitt/WVU fan split on College GameDay, and they offered a different forecast than the 75/25 split previously mentioned.

“This crowd’s gonna be about 60/40 Pittsburgh tonight,” host Rece Davis said, noting a lot of West Virginia fans bought season tickets for Pitt just so they would have access to the Backyard Brawl. On TV, the 60/40 split seemed like a fair assessment by Davis and if anything, it may have been too generous to Narduzzi’s beloved Pitt fans.