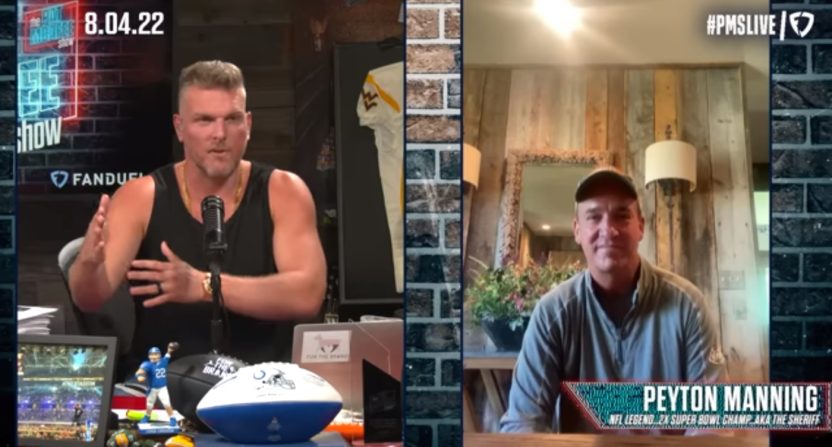 Pat McAfee is partnering with Peyton Manning’s Omaha Productions to create an alternate college football broadcast on ESPN this season.

The deal will feature six college football simulcasts on ESPN2, with McAfee as the host and Manning’s team serving as the production company. Like the Worldwide Leader’s other alternate casts, the game’s primary feed will still air on ESPN.

“Peyton Manning and I are getting into business together,” McAfee said. “We have officially agreed, alongside Omaha Productions, to simulcast six BIG-ASS college football games this season. We will be on ESPN2. The main cast will be on ESPN. Omaha is obviously helping us along the way and we will be running it. Peyton, you are the f*cking man. Thank you for the opportunity, thank you for the business.”

While alternate broadcasts are not new, they’ve certainly enjoyed a surge in the last year. Following the popularity of the ManningCast, ESPN added the KayRod feed with Michael Kay and Alex Rodriguez for Sunday Night Baseball. Amazon Prime Video, which was reportedly interested in an alternate Thursday Night Football broadcast hosted by McAfee, signed the viral sports and comedy group Dude Perfect for the role instead. And among the other alternate feeds, the NFL put a slime-filled Wild Card broadcast on Nickelodeon.

McAfee’s college football simulcast on ESPN2 would signal an end to his rift with the Worldwide Leader, which he previously outed for attempting to ban their employees from appearing as guests on his show. But McAfee noted the partnership to build this simulcast is much more about Omaha Productions than it is ESPN.

“When the idea was pitched to me, I was like, ‘you’re telling me the people at ESPN are gonna let me on ESPN2 to do my own thing?’” McAfee said. “They were like, ‘probably not, but we are Omaha. You’re not gonna be able to swear and stuff, but you can do whatever you want.’ Alright, if that’s the deal I love it.”

McAfee will be broadcasting live from the ThunderDome, which was the WWE’s primary setting during the height of the COVID-19 pandemic. The games for McAfee’s simulcast have not been announced yet, but he claims to have been assured they will be significant matchups.