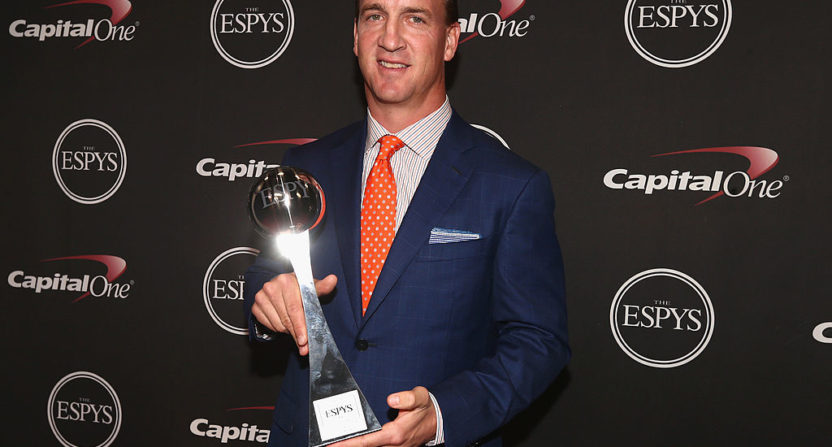 Peyton Manning continues to find ways to stay busy in his retirement from the NFL. This summer, Manning will take on the role of ESPYS host, ESPN announced today. Manning will host the 25th ESPYS on July 12th.

The ESPYS are designed to bring the sports world and Hollywood together for an evening of made-up sports awards, and the event has typically been hosted by a Hollywood star. Athletes have typically not served as the host of the production, so Manning is stepping into some rare company as ESPYS host. The only other athletes, current or former, to host the ESPYS are Lance Armstrong (2006), LeBron James (with Jimmy Kimmel in 2007) and WWE superstar John Cena last year. Other hosts through the years have included Dennis Miller, Tony Danza, Samuel L. Jackson, Justin Timberlake, Jon Hamm and Drake, among others.

Manning should be a natural for the gig if his past performances are any indication. Manning has been a Saturday Night Live host and has plenty of experience in commercials. This role is slightly different of course, and the success on the stage may be dependent in part to the writers and the script. How many zingers will Manning have lined up? How many shots will he feel comfortable taking at others with a sense of humor?

Regardless, the selection of Manning as host of the ESPYS was probably inevitable given the Manning profile. He is well-known, genuinely liked and respected across the board, and he is about a safe pick as you can find. And with this being the 25th anniversary of the ESPYS, it feels like a natural selection.

Manning won the Best College Player ESPY after his senior year at Tennessee and was later named the Best NFL Player in 2004, 2005, and 2014, making him the first three-time Best NFL Player ESPY winner (Aaron Rodgers joined him in 2015) Manning also received the Best Record-Breaking Performance ESPY in 2005 for setting the single-season passing touchdown record with 49 TDs in 2004, in 2014 for the single-season passing yardage record and touchdown passes, and once more in 2015 for setting the single-season NFL record for career touchdowns with 530 career touchdowns at the end of the 2014 season (now that is a made-up record if I’ve ever seen one). To add to the collection, Manning also received the Best Championship Performance ESPY in 2007 for his Super Bowl MVP award in Super Bowl XLI against the Chicago Bears. In 2016, Manning was awarded the ESPY Icon Award.

The ESPYS will air on ABC on July 12.