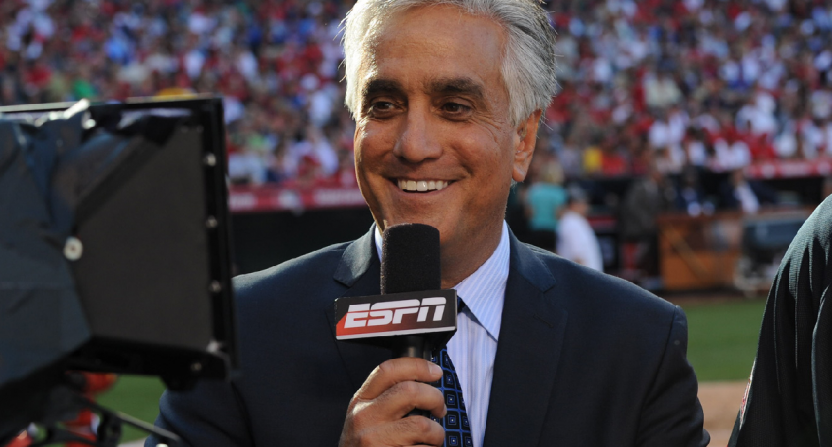 The sudden passing of long-time ESPN journalist Pedro Gomez at 58 last Sunday led to numerous tributes from colleagues, other journalists, and MLB players. Gomez’s passing has now also led to some new resources for aspiring journalists through the newly-launched Pedro Gomez Foundation. Passing on his knowledge to the next generation of writers and reporters was always a key goal for Gomez, as Katherine Fitzgerald writes in The Arizona Republic, so this seems quite fitting:

The Pedro Gomez Foundation was formed almost immediately. The foundation will first support scholarships for students at the Walter Cronkite School of Journalism and Mass Communication at Arizona State University, with the plan to expand to other passions of Pedro’s.

[Family friend Nikki] Balich, who is also the Executive Director of the Arizona Sports and Entertainment Commission, made the connection between the Gomez family and the Cronkite School. Balich said Sandi knew right away that helping the next generation of sports journalists must be part of Pedro’s legacy.

She said that she is going to live her life to try to be more like Pedro,” Balich said.  “She just wants to do good. And this is what Pedro would want.”

Fitzgerald’s entire piece on Gomez is well worth a read, especially when it comes to her story of how he sacrificed his time to speak to a journalism class she was teaching:

Like so many others, I grew up seeing Pedro on TV, marveling at his reporting. When I eventually met him on assignments in Arizona, I was floored by his warm demeanor. Around the same time, I was also teaching Intro to Sports Reporting at ASU. Eventually, I asked a question he had gotten many, many times: Will you come talk to my class?

Pedro agreed immediately, needing just two follow-up questions: When and where? I would tell him the room number and then pass along the unfortunate information: the class was an 8 a.m. That felt like too big an ask. “Maybe 8:30?” I said.

So in person or over Zoom, Pedro came to class the last couple of years. Each time, he would harp on the importance of asking good, open-ended questions. Don’t ask yes-or-no questions, he would say. Ask why and how.

Gomez is just one of the many, many prominent sports media figures lost in the past year. But he was an exceptionally notable figure, and someone who was so instrumental to decades of baseball coverage. And even more than many, he always appeared to take time to pay it forward for younger journalists. ESPN/NPR’s Howard Bryant shared an incredible story last week about how Gomez interceded for him after then-Oakland A’s manager Tony LaRussa went after him:

1) For the 2nd time in three weeks, I'm breaking Twitter hiatus to tell a story of a great person we've lost. ESPN's Pedro Gomez: Sept. 18, 1993, I covered high schools for the Oakland Tribune, but the paper gave @JHickey3 a few days off, and sent 24-yo me to cover A's-CHW.

4) LaRussa goes on. "This is the type of shit I'm talking about, Frank." He looks around the room. "Where's Hickey?" Then LaRussa looks at the byline and says, "Howard Bryant? Howard Bryant? Who the FUCK is Howard Bryant?" I sheepishly raise my hand.

6) A voice interrupts him. "Jesus Christ, Tony. You know we don't write the headlines. The story is right. Leave the kid alone. Why are you embarrassing him?" It was Pedro, whom I didn't know, never met, and worked for the San Jose Mercury News, a rival paper.

8) Pedro did these things *14 years* before we were finally on the same team, when I joined @espn in 2007. He had no reason to do them except for the person he was, committed to the work, exceptionally giving to people who were, also.

10) It is his example I try to follow with young reporters, because I remember being in Tony's office, fodder for a hostile business. I talked to Pedro 3 days ago. He picked up as always with his energetic, "42! Como estas, hermano?" We lost a real one today. #RIPPedroGomez

That sort of support from rival reporters is far too uncommon, and it goes to show just how exceptional a person Gomez was. And it’s great to see that his legacy will be honored with this new foundation, and that it will focus on supporting young people looking to get into journalism. Gomez will long be remembered, and this foundation in his honor will certainly produce some other journalists worthy of remembrance in their own right.